This feature started here - thanks to everyone who shared their thoughts over in this thread:

Map of uncompleted streets in my city Ideas

Is there a way to see my uncompleted streets (in a particular city) on a map? This way, I can figure out what my next run may be.

The basic idea of it is that you can go to your LifeMap page, and click the magnifying glass button in the map controls. This will place markers down on the map for all your uncompleted Nodes in view.

Pair this with LifeMap Live, and you’re unstoppable!

There is a lot of potential for this feature, and this is just the start!

This is awesome. Thank you for all your hard work!

Very awesome, but I do need a way to view (nodes of) uncompleted streets.

edit:
I just noticed the LifeMap Live feature.
Now, I feel like PacMan!

This is a really cool feature. Love it!

another thumbs up post. This is a great addition.

Hey @rutgermooy I’m releasing an update now that limits the displayed Nodes to those of uncompleted Streets.

Ah, I actually liked it better being able to see all outstanding nodes whether I “completed” the street or not. Any chance we’ll be given that option?

Yeah, @timothykunard … there was some conversation that popped up around a “Hard Mode” setting that would change the required completion percentage from 90% to 100% … I’ve just added this to the #ideas category:

This idea is for the “90% is not enough” crowd: a User setting that changes your competed Node percentage from 90% of the Nodes on a Street to 100% … Streets don’t get marked as ‘complete’ until you run 100% of its Nodes. This idea stems from the Node Hunter feature, because some people didn’t like that it limits the displayed Nodes to those attached to uncompleted Streets. Vote on this topic if you like the idea. Also, let me know if you have any questions about it, or ideas on how it would …

Can you comment over there if this isn’t actually what you want? I’m realizing that maybe you still want to stick with the ‘90% == complete’ aspect, but you just want to see any unfinished nodes in Node Hunter.

Hi, I’m a supporter but don’t seem to have the Node Hunter yet. Do I just need to be patient?

Hi @stewartharding1 - thanks for supporting the site!!

The feature is opened up to anyone with a Monthly Contribution. It doesn’t matter what amount, it just has to be monthly. I need to do this because there are ongoing (monthly) costs behind some of these features.
This confusion always bums me out …

I’m not sure what to do about it, though.

Such a nice addditon, running around and collecting coins like Mario, gonna grow me a moustach now.
One remark, moving life map doesn’t work because the focus stays on the top menu bar. This only is on my iphone and both in Chrome and Safari.

No problem, that makes complete sense. I re-signed up yesterday as a monthly supporter, so wasn’t sure if there’s be a delay seeing the features or whether I’m being impatient!

Uh oh! Sounds like I need to fix something … you’re not listed as a monthly supporter! I’m out now, but will check/fix as soon as possible

as a litte remark: I can see a lot f nodes on partly unchartered maps, it clutters sometimes the streetnames. Is it possible to make the nodes somewhat smaller? maybe a different form?

Next suggestion (low priority!) : on mouseover or click on the Node, show the street name (and city name) that it belongs to.

I can’t reproduce this issue @RichardRichard … I’m able to zoom/pan around the map on my iPhone. Can you share the link to your LifeMap, so I can try it out on my phone? Maybe there’s something about your data…

This afternoon I noticed the same problem on my iPad. When I want to move the map, the top menu bar moves but not the map.

I like this very much - keep up the awesome work!!!

Just wanted to say this is fucking awesome and I cannot believe how many incomplete nodes I have! 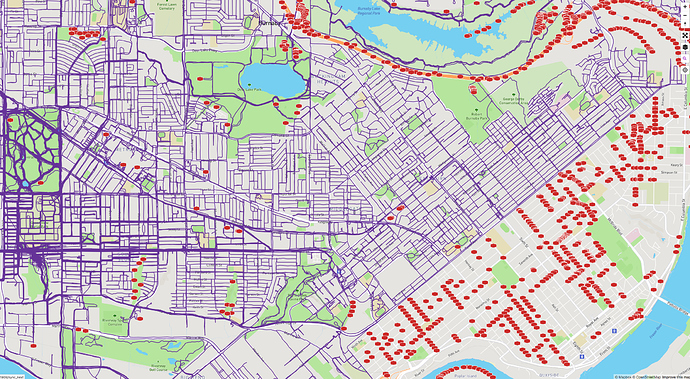 (In case it’s not clear from the pic, the section at the bottom right is a not the same city as the completed parts. I’m 94% or something of Burnaby).

Thanks so much for the feature. I wish I could restrict by city but honestly this just makes me even more stoked to finish EVERYTHING.