I’m curious if there could be a way to export my runs including street statistics per run. The columns would be date, city, miles, streets completed, and streets progressed. That way I could track and trend in Excel what my progress looks like over time. My project will last years, so that would be a helpful feature.

Possibly, but requests like this remind me of The XY Problem (it’s not quite the same, but it’s reminiscent).

It sounds like CityStrides isn’t providing you a view into your data that you would like / that would help you accomplish your goals. It sounds like you have some ideas of stats/visualizations that would be a great addition to Improve the logged-in homepage (I’m not asking that we move this conversation; just pointing out other relevant threads).

So far I’m hearing that you want to track what your progress looks like over the course of years. There are a lot of different ways this data can be sliced & diced. If I’m reading your request correctly, the two immediate visualizations might be:

I’m certain that I don’t have a full picture of the magic you’re doing (or could be doing) in Excel. Can you clarify/expand on these ideas? This sounds like a very valuable thing to build into CityStrides.

Personally I still think some sort of visual animated video of street progress over time on a map would be the ultimate visualization (and frankly a cool thing people could share on social media that also has great marketing potential).

I have two things in mind. One is a look back to see streets progress on different time intervals. For example, I could see the number of streets completed on daily, weekly, or monthly interval. This could be a bar graph or a list of numbers. Questions this would answer would be things like, measuring the impact of an injury on accomplishment or conversely, seeing the results of increasing mileage in terms of streets covered.

The other thing I have in mind is to forecast what I might accomplish if I continue on the current pace. For example, if I am averaging 100 streets per month and continue at that pace, I can do 1200 streets per year. If I up my pace to 110, then I could achieve 1320.

To be honest, I hadn’t thought of the city itself as a dimension as I’m running primarily one giant city. That said, I can see how others who may be running in multiple cities would want to see the same stats both in total and by city.

So happy about this. Will be playing with it. So many new presents after being away from some months.

@JamesChevalier Now that I’ve been running streets for a full 12 months, I’ve put together a spreadsheet (good-ol’ data entry combined with what Garmin allows me to download) with a sample graph. I can send that to you if you like - let me know how best to do that.

Alright, I’ve just released a Supporter-only test page for us: Beta Chart. Ultimately, I want this chart to be placed under your three latest activities on the homepage; potentially replacing those two ‘most completed’ lists.

I expect that there’s quite a lot missing, but it seemed like a good place to start openly testing.

Chart seems cool and I like the smoothness of the data over months rather than smaller increments, at least as a default view.

One error for me (and perhaps other supporters that have been here for a year+) is that my mileage data before May 2020 is amplified 2- or 3-fold because I had previously connected multiple trackers (Strava & MMF, and when it became an option, Garmin only). Probably won’t matter for newer users/supporters that only ever paired one tracker.

Individual users deleting their duplicate/triplicate activities probably isn’t the answer due to how taxing that is for the servers, but I do wonder if there’s any way for you to detect those duplicate activities based on them being the same day/time? See pic from April 2020, I believe this was when Garmin integration started but before we could pause our other services: 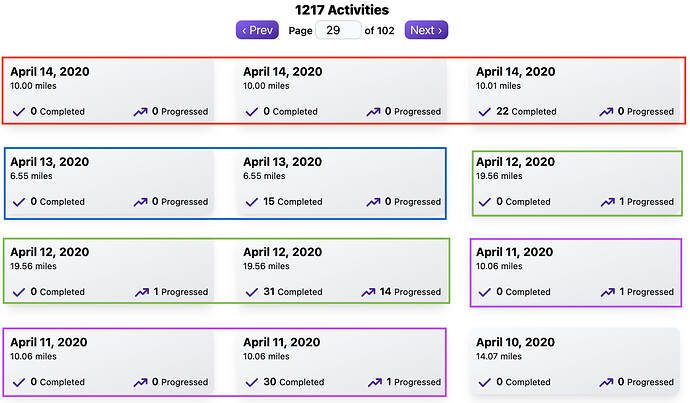 Hm. I’ve since fixed that duplicate activity issue, by ignoring activities that have the exact same start time.
It might be better to de-duplicate these activities.

Hi,
Very cool!
But number of streets displayed in charts seems to be total of street of city and nested city.
For march, it’s displayed 741 streets but it’s officialy 370 streets for Quebec city.

I am pretty excited by this functionality! I’ll keep playing around with it. I will say that on first glance, I would probably never use the group by day function. That appears too granular for this view.

Ultimately, I want this chart to be placed under your three latest activities on the homepage; potentially replacing those two ‘most completed’ lists.

But number of streets displayed in charts seems to be total of street of city and nested city.

Ooh, thanks! That’ll be fixed up in the next release.

add number of runs as a metric

I did have this in my early development, because @feldpauschmkr had it in their spreadsheet … I removed it because I rarely have 2 activities in one day, so that ended up being a weird flat line for me. I do wonder how many people have multiple activities per day, in a way that would be useful to graph them by default (vs if I can figure out a way to add the data to the legend but have it default to hidden).

heh, this is actually the first way I graphed all the data - where the completed street line would continuously increase over time. I noticed, partway through development, that the example I was working off wasn’t displaying the data that way so I switched it. I’ll play around with ways to add the ability to toggle between the two views.

I will say that on first glance, I would probably never use the group by day function.

Yeah, it’s probably ok if you’re just looking at a week’s worth of data … but once you get out past a month it’s gnarly … it might be better suited to a bar chart, but my tests with that ended up having razor thin bars which were terrible to interact with.

A really important thing, for anyone who uses their own spreadsheet/charting approaches outside of CityStrides, is to look at this chart from the perspective of “does this negate the need for me to manually build my own stuff outside of CityStrides?” … My entire goal is to reduce the amount of effort that you need to put into achieving your goal(s). I’m aiming 100% for everyone to have the ability to go to the homepage and get all the info they need - from the perspective of this dashboard/charting requirement.

I used to maintain a spreadsheet to keep track of my progress, but specific to one city since that’s what my project is. A possible option for an additional filter?

In addition to the km and streets, I also had the percentage completed for the city on my chart. I also used my progress to make projections as to when I would hit certain milestones (“if I bag streets at the same rate as this month, I will hit xx% completion in May 2022”).

specific to one city since that’s what my project is. A possible option for an additional filter?

I think it’s just completed streets that would make sense to put on a city-specific chart. Am I missing other opportunities?

Although, I might be able to do some wild db queries to collect your distance within a city…

Did you have a specific list of milestones? Were those displayed a certain way?
If the chart was city-specific, it would be cool to display a projected completion date. I’m unsure how specific the milestones might have to drill down - every 5% / 10% / 25% / 50% - and how that might be usefully displayed… 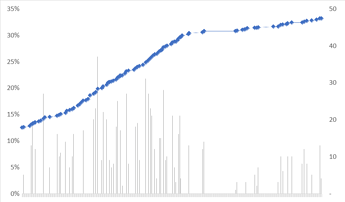 image847×496 5.55 KB
I had the milestones as a kind of dashboard above the chart, along with the number of activities and average streets per activity. I used completion percentages in increments of 10 for the milestones, showing streets required to achieve and the estimated date, but what is most suitable probably depends on the size of the city and personal preference… Definitely many ways to show this data, curious to see what others have come up with

I have no idea if or how this would work, but it’d be so cool to see miles run in a city/admin area, and/or what % of a city we’ve run on mileage rather than streets. Former may be more feasible than the latter

Updates on April 23, 2021 (Release 84) I moved the chart to the homepage, added activity count as a metric, and was able to include a ‘cumulative’ toggle. The street count now respects nested cities, so that should be accurate now. ( @r.weide @3d77eb7f476ad71e3f37 )