QuickStart Help getting some map data?

Hello,
Found Citystrides yesterday after a recommendation from the parkrun FB group and signed up as a supporter. I promise I will read everything

but was wondering what’s the easiest most efficient way to get out there and starting to collect roads to populate my life map? I mean so I collect every node of a road on a run and not miss any. I could map my whole estate in one training run, but I’d have to follow a route - which is the best way to plan/easiest to follow while running? Cheers!

kinda depends on the road layout. Most cities are relatively grid-like, even if they don’t consist of perfect squares; there might be a more meandering road surrounding it for example, but within it, you’ve got a grid.
What I do is cover all roads going in one direction first, and then all the ones going in another direction. If the hood is big, then I can split this into different sessions pretty easily. This is if it’s a neighbourhood I know well, like where I live. If it’s a new hood I’m trying to cover, I usually run around it once first, to get a good grasp on it (yes, there are maps, but it helps me not get lost if I know where the boundary is.
So yeah, often I run a hood 3 times unless it’s very small or I want a long run, 1 for getting border/boundary of a new hood, 2 for doing for example all streets running north-south, and 3 for doing all streets running east to west.

That’s how I do it at least. Not saying it’s the most efficient way, but it works fine for me.

Where i live is grid like but has lots of dead ends. I use node hunter and then route builder. After I build a route (which helps with knowing how many miles I will do and where to start and finish) then I send it to my garmin and use the navigation. Thats the most helpful features.

Everyone is going to have a different experience - there’s probably no “one right way” to do this (and we’re often limited or propelled by our city and available technology), so pick what works for you from everyone’s suggestions.

I use Route Builder on the page of the city I’m running. I’ll toggle Node Hunter at times, to get a sense of where the nodes are. If I’m questioning a particular street’s node placement, I’ll search for it in the list and use the show/hide toggle.
Before I go out for a run, I’ll open the route I built in the browser and enable LifeMap Live (

I had to name it something - you click the ‘crosshairs’ button on the right and it displays a blue dot where you are). If I question whether or not I’ve fully run a street, I’ll toggle Node Hunter in that open page - comparing my blue dot placement with the nodes around me usually does a good job of indicating whether I got it or not.

I try to build routes that I can mostly fit in my head … you can avoid adding lots of turns in your route, or always try to turn in a certain direction, or plan around intersections/buildings/etc that you’ll remember … I don’t run very far, so a lot of the time I’ll have a short list of streets I intend to complete & a general sense of how I’ll get to them.

Thank you for the tips everybody. I will have a try of all the suggestions to find the one that works best for me. I just walked my neighbourhood with Strava to get some test data - really enjoying it. Cheers!

I work in similar fashion.
Use node hunter when planning a route, since a year or so, the perfect tool routemapper is available in CS. (thanks James) Upload the route to Garmin and to Rungo and run with the fenix and with rungo on .
Running with my mobile in hand has become second nature over the years.

one of the best long runs i did during my Marathon training was this 30k. As you see: double back, cul de sacs, it’s all part of the game 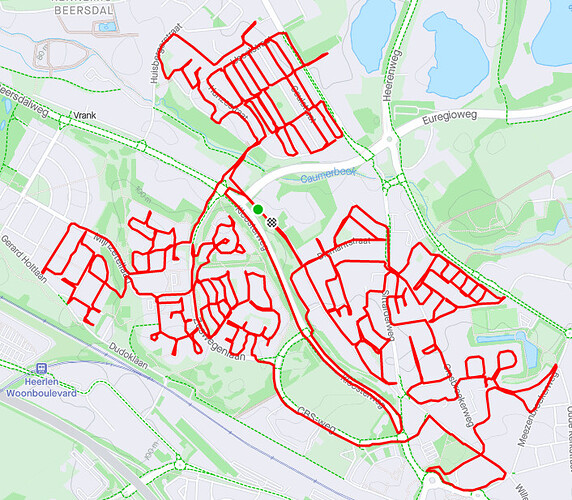 That’s fantastic - looks exactly like my neighbourhood - no grids here!
I’m now using the route planner and phone in hand. Will get it to the Apple Watch at some point. Cheers!

Where do I find the route planner and node hunter? and what is lifemap live? I need all these tools! Also is there a way to find a map of roads I HAVEN’t Run?

All of those features are paid features. You can learn more about them here Supporter Features - CityStrides

There’s not really an “unfinished roads” map view (yet?), but you can kind of get that view by visiting a city’s page from your profile (those links are special in that it shows you your complete/incomplete streets for the city). From there, you can show/hide individual streets and you can use Node Hunter (a paid feature) to show unfinished nodes limited to the current city.
Another thing that helps out a ton is that supporters see their LifeMap shown on the city page - this makes it even easier to spot areas you haven’t completed yet. The Updates on January 10, 2022 (Release 463) inadvertently removed that feature from non-supporters. I’m working on some LifeMap features that should include bringing that feature back to being free, but I don’t have a timeline on when I’ll be done with all that work.

Oh, thanks for the personal reply! I actually thought I was a supporter! Let me try again.

It does look like you are… let me know if you need any further help, either here or via private support

I plan the routes out usually in a mapping service like ridewithgps.com, so I can see good elevation tracking (my area is pretty hilly). But I always make it a goal to not look at my phone while running, I have to remember the route. I try to force myself to learn the area. I have only gotten pretty lost a few times and cheated a few times with my phone as well

. If I am running in an area where all the roads are new, I look at a map beforehand and get a general idea of the layout. Then I park and just run and try to end back at my car at the right mileage I planned to do for the day.

Welcome Ian, I usually map my routes in Strava, with the CityStrides life map open in another window. Strava automatically sends the saved route to my Garmin Forerunner 245 then off I go. My watch gives turn-by-turn directions but (I’ve posted previously) has a limited capacity to do that so then I’m left squinting at the small watch screen. I usually take my phone with me too, and pull that out if I need to zoom in. [The route-builder in CityStrides came about after I started using CS and I’ve been lazy in not engaging with it]
A lot of US cities may well be grids but over here in the UK you’ll know we have a lot more wiggly roads and dead ends… There is no perfect way to find the optimal route (unless you’re some sort of Alan Turing style mathematical-code-breaking genius) but it’s fun trying to optimise it. I often spend lots of time trying to find an optimal route to blitz all the roads in an area, only to find myself two weeks later unavoidably covering a road again en-route to another street #firstworldproblems

Thanks for that. I’m really enjoy paying this - has added another element to getting the miles in on Strava and also the dog walks at night.
Wiggly UK roads are a bit of an issue. I can see me getting into trouble at some point as people are inevitably going to ask why I walk / run up their road then turn around and go back. It’s very common on estates for nodes to be at the top of cul-d-sacs. I’ve found you can track these streets without a route just using simple maze solving approach (keep turning left and backtrack if you can’t)