During a recent update, one of my towns (Bedford, NH) dropped off my completed list. when I look at the street (Preysnar Road), I see that I ran the entire street, but two nodes did not activate. Bedford, New Hampshire - CityStrides

I also have a similar example in Amherst, NH where I ran Bayberry Drive but one node did not activate. Amherst, New Hampshire - CityStrides

Wondering if this is being caused by a recent update?

FYI: Can’t seem to upload images to this post. Just spins and says that it’s processing.

My guess is you are experiencing same issue as in Node inexplicably red.

To re-hash, the completion of nodes is based on one of the GPS points recorded in your run needing to be within 25 meters of a node on the street in CS. If your device struggles with satellite connection (ex: in tunnel, around tall buildings, etc) at a certain point, it won’t be able to record any GPS points for a short period. This leads to straight lines being drawn between when it last had connection to when it regained connection. That straight line may go through nodes but technically there are no GPS points that were close to the node.

Looking at your Preysnar run, it is a straight line from one side to the other. Based on the activity title, it sounds like you manually created a map and uploaded it. If that’s correct, I’m assuming you made one point at the start the street and then another point at the other end of street and thus you get a dead straight line. All the nodes in the middle of the street wouldn’t be close to either of the “fake” GPS points you added to your run and thus wouldn’t be marked as completed.

Looking at your Bayberry run that also looks like to be a manufactured run cause of how straight some of the lines look. I drew arrows where it looks like “fake” GPS points were clicked as there are subtle adjustments to the straight lines at those points. 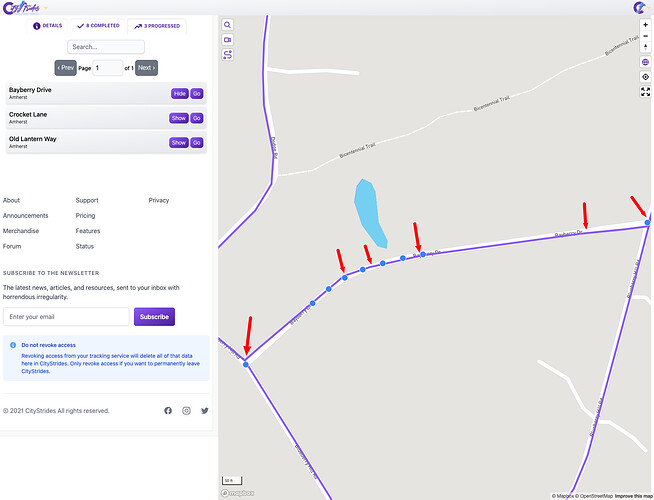 If these both were manufactured map runs, then you would need to correct the original source that created the runs. You’d also have to do pretty the same workflow as How to edit a run from Garmin in order to get the new run processed. If you plan to have more manufactured map runs like this in future, you’ll need to add more GPS points to follow the street curves as that is where the nodes will be. In addition, even long, dead straight streets may have nodes in the middle of them so include a couple GPS points there as well.

That was a very good observation. I didn’t notice that, at first glance, given I completed the town of Bedford two years ago and it has now determined that Preysnar Road is no longer complete. Your observations seem valid but doesn’t explain why the manufactured run was accepted for 2 years and now rejects it.

I believe I have only about three manufactured activities, and yes, Bayberry is also one of them. I had really bad GPS Stray on that one which missed many of the nodes. 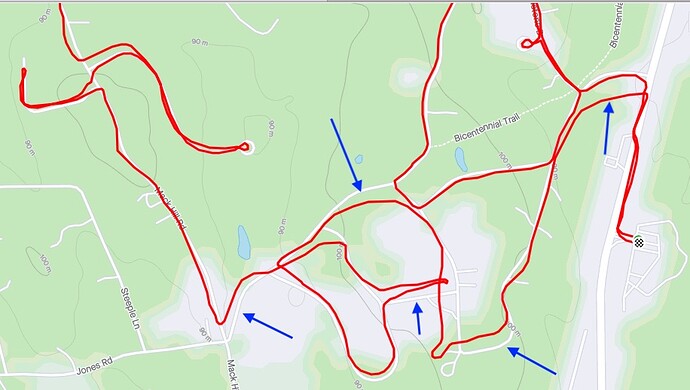 I have been trying to recreate those runs with more GPS points but haven’t been successful posting a back dated activity. The CityStrides site has been so bogged down lately that it is taking hours to delete an activity and processing a replacement activity. I’ll keep trying but wanted to get back to you and thank you for the suggestion.

I completed the town of Bedford two years ago and it has now determined that Preysnar Road is no longer complete. Your observations seem valid but doesn’t explain why the manufactured run was accepted for 2 years and now rejects it.

Looking at the OSM history for Preysnar Road, it was labeled as private (ie doesn’t get imported into CS) from it’s creation 14 years ago in OSM until a user removed that access tag on Oct. 19th, 2021 and specifically indicated, “Preysnar road is town-owned, not private. Lack of signage would lead to this misunderstanding.”

This means Preysnar would not been in CS in the past. It likely came in on the last update to the city on Nov. 16th. So it’s not that the manufactured run was accepted for 2 years and now rejected, it’s that the street wasn’t even in CS until recently to be checked against.