I’m not sure if I’ve got the image usefully uploaded here, but it shows a section of a walk I did in Anderson Street, Chatswood NSW today. My GPS track passes directly through a node, but that node is still shown red, i.e. unvisited. All the other nodes in the section are blue.

Has anyone else encountered this and/or knows whether it is a known issue or not? 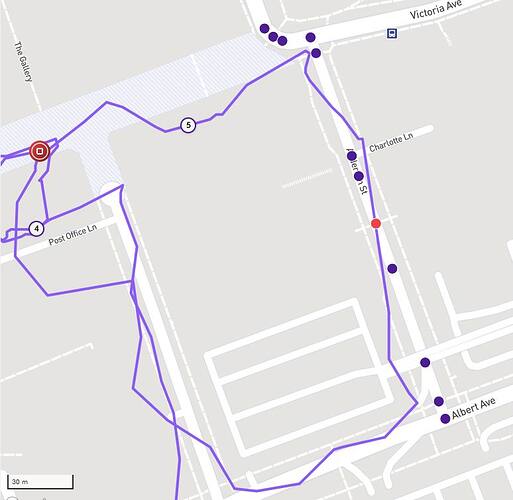 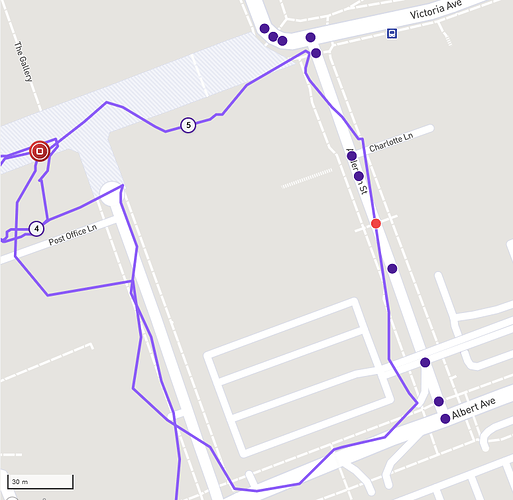 The only thing I can think of is that the straight line you’re seeing is a big gap between two timepoints in your GPS trace recorded by your device. CityStrides does not count the nodes your trace passes through (otherwise, you wouldn’t have credit for any of the other nodes on Anderson Street!) - it counts all nodes within a certain radius of the timepoint recordings that compose your trace. Given that your track is noisy, I’m assuming this is an urban setting, and it’s possible your recording cut out for a few seconds around Charlotte Ln before reconnecting as you approached Albert Ave. It drew a straight line to bridge the gap, and the line happened to run right through the node for which no timepoint was close enough to pick up

My suggested fix is to just re-run the street and hope for better connectivity, or you can edit your .gpx file with Runkeeper or RouteConverter - both free.

Yes, the same thing has happened to me when a street passes under a bridge and connectivity is lost… You get a straight liene, but since there are actually no GPS readings close to the node it remains red

That’s a very good observation by @kevincharlespels ! That is a very straight line passing over the red node. I didn’t see it mentioned, but CS has a 25m search radius around each GPS coordinate in your trace. Those individual coordinates are the only thing used to determine if you “captured” a node.

Given that, you can try again, or manually complete the road (apologies if you already knew this).

Thanks for the feedback guys, it all makes perfect sense. It does look like my GPS missed a way-point, and the two that are there are both >25m from the missing node.

Thanks, that’s a great explanation. I have this type of thing happen to me often - usually I don’t get credit for a node at the very end of a short street. I can edit it in Runkeeper, but then how do I get it to re-upload here? I did a run yesterday that missed the completion of 4 streets

I marked them as complete, but my type A personality hates to see a red node that I KNOW I’ve completed!
In the past I’ve manually re-entered the same route into Runkeeper, making sure to hit the very end of the roads, but then it looks like I’ve done the route twice and it seems like cheating, haha.

Oh I’m totally the same way. To get an edited run from runkeeper to port into CityStrides, you need to delete the original activity in CityStrides; once the deletion processes, go to the right-hand dropdown menu and click ‘Sync Now’. Then your edited activity should be the one that appears in your activity list. 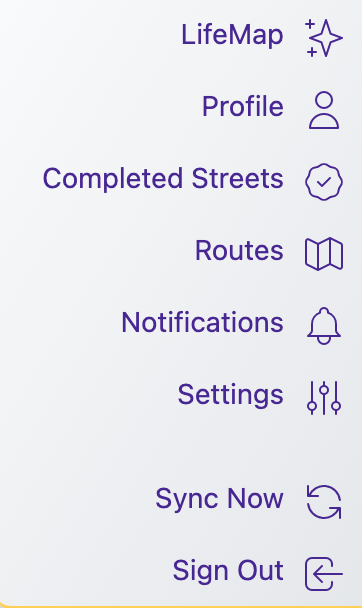 Oh yay, that worked! Thanks so much, this is going to make me so happy.