Did the Map graphics/background change in one of the latest updates? State Highways and Interstate Highways show up in a tan/gold color which stand out clearly, but any side streets are difficult to see, being white and outlined in light gray, unless you zoom in on a small area. I am finding that this make it difficult to find missed segments on our lifemap without zooming in to view very small portion of the city. Is this just me, or has anyone else noticed the change?

just noticed another post on this in the last few minutes…

I’m sorry, I didn’t know where else to put my question – was there any secret update today? My map background looks different, much more cluttered, much less readable – plus it seems more like a natural features & traffic infrastructure map, than an urban map. I’m confused

Yeah, I’m testing out a new provider because my previous provider was too expensive. I’ll hold off on announcing anything properly until I’m more sure of things.

5 Likes
City shape in CityStrides not quite like official or OSM
joeyferg (Joey Ferguson) February 3, 2022, 6:07pm #5

Hi James - just some feedback on the new map provider. I much prefer the old style because I could actually see the difference between the “thicker” streets that I need to run and alleys that are not official streets. In the new version it is very hard to tell the difference.

this new one shows an older version of OSM by the way.
I’ve noticed the updated OSM map on CS last week I guess, but the nodes were not updated yet.

This is also terrible for me. The area I am running I cant see the streets unless I zoom way in. All the roads are about a mile apart. If I zoom in then driveways look the same as roads.

Sorry to report the same thing over, but all non-roads (alley-ways, parking lots, private access roads) are the same as official streets and do not disappear when zooming out like the previous map version. Makes it harder to plan for new runs.

+1 I’ve chosen to run the alleys where I am but I still need to know which is which when I’m planning. I don’t want to plan a very early morning run with alleys because that seems like a recipe for trouble/pissing off neighbors.

+1 I, too, am struggling with the close zoom-in required to see individual (non-major) streets.

It seems it might just be about choosing the right style.
More information available here
https://docs.stadiamaps.com/themes/

Completely understand that! Gotta keep the pricing reasonable. Thanks for taking into account our feedback.

Thanks, I’ll be taking a look at this tonight & also getting in touch with their support to help me along. I’ve done very little map style work, so I’m a bit lost.

I’m noticing that the issue of street names not appearing until zoomed in too far is way more pronounced on mobile. It’s not nearly as bad on my laptop.

I’m guessing that I’ll be able to adjust the zoom limitations on street names fairly easily. Some quick spot-checks on other reported issues like the alley/street design are looking more difficult - I haven’t been able to find an alley that is tagged differently in Maputnik, which doesn’t give me the style control that we saw in Mapbox.

It would help if I knew what I was doing.

The change in maps stopped me in my tracks when out for my run this morning. Very hard to see what is a street versus driveway versus alley. See attached phone screen shot.

And, I LOVED the aqua color of the water in the old map color scheme. I was about to order shirts from your website because I am close to finishing Seattle. The aqua would be weird with this new map color. I know. it’s a strange thing but boooo!!

Yep - I haven’t tested the useability of the new map on a run yet, but was perturbed that I couldn’t see the satellite view.

I figured I better say what I do like. I like that lakes are lighter as i live in the land of lakes nice to see the lines around them. Before the lakes were more bold so you never really seen a single run line. I also do like the county boarder.

I just hate the yellow lines for busy roads. It’s way to much in major metropolitan areas. And I really want to be able to see the roads I have not run in a city view without zooming in to 3000 or even closer. Sometimes driveways out where I live are a mile long so now it all looks like streets. Today I had to go over to google maps to check if something was a road.

I definitely became a paid supporter because this website was so much easier than using Google maps. But currently the way this looks I cant ser continuing. I get to save money but not if this.

From what I can tell so far, the only thing that I can’t seem to change with this provider is the display of driveways vs roads. It seems like this provider doesn’t know that distinction.
Everything else looks like it can be modified. Two really quick and extreme examples: 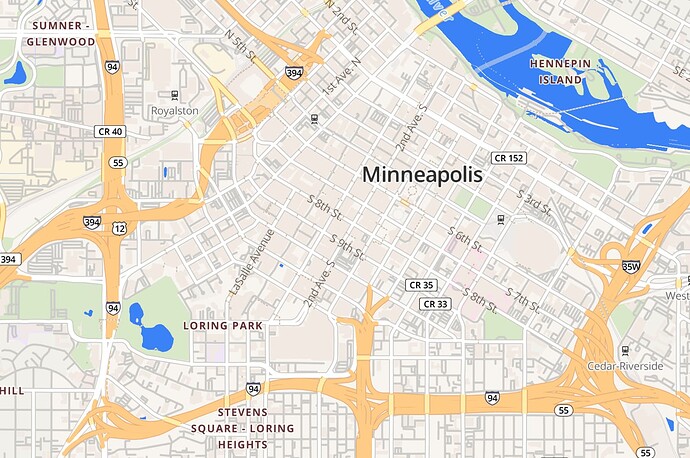 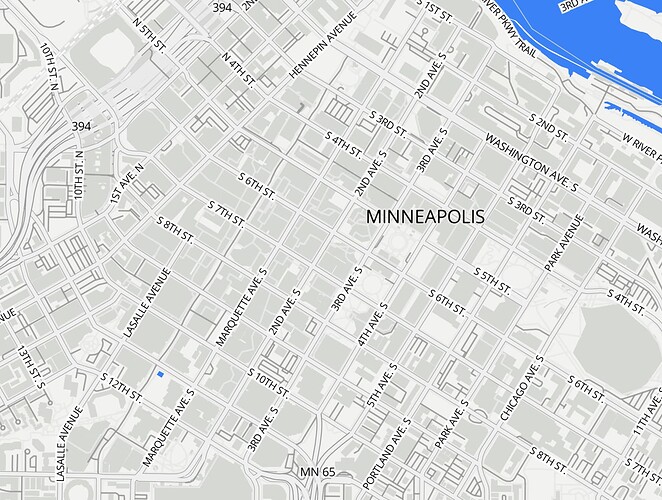 It’s entirely possible that I’ll be able to rework these styles into something that’s actually usable.
I’m completely on board with everyone’s feedback, and have no intention of keeping this design/provider if I can’t make it work for you.

Just wanted to echo that I greatly preferred the old style. I understand wanting to reduce costs but this map style is far less usable than the old style. The alleys and driveways are the biggest issue but the style almost seems blurry to me.

I was reliving a past city, and saw what I thought were a bunch of missed streets, even though I thought I was at 100%. 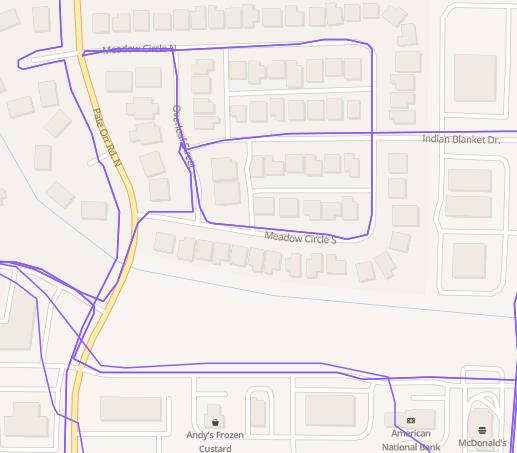 Glad I came across this thread.

And Node Hunter helped too, once I figured out why.