Do you mean you can see them in Strava or in citystrides from Strava? It could be your privacy settings! They need to be made public not private.

yes i see activities posted in city strides but they don’t show up on lifetime map. my privacy settings on strava have not changed and are public

Hey @doctorburns … sorry for the trouble - your issue is the same as this one:

My life map is not showing ANY streets or past runs. When I look at my profile individual runs are showing up, but the Life Map is devoid of any markings. This just happened today. I’ve logged out and back in to no avail. Please help, thanks!

I’m working through the issue with Mapbox now:

Thanks! I was also able to recreate the issue within Chrome & Safari. Firefox works fine for me

I’ve submitted this issue with Mapbox & I’ll keep everyone up to date here with how things play out: https://github.com/mapbox/mapbox-gl-js/issues/6086 Small Update: I’ve found that it’s something within Mapbox’s code… An older version of their plugin works properly, while later versions do not. I’ve left the old version in place - so you should all be able to see your LifeMap agai…

So far, it’s either looking like bad data or something having changed in Mapbox’s code.
(I’m going to merge this topic into that one, so there’s a single thread on this issue.)

For the past week or so I haven’t been able to see my stuff on the Safari browser, but can see it in Firefox FYI.

Is this a thing I can fix with my browser or is it a City Strides issue.

For the past week or so I haven’t been able to see my stuff on the Safari browser, but can see it in Firefox FYI.

Safari, Firefox and Chrome are all blank for me… and it doesn’t seem to matter if I’m logged in or not… 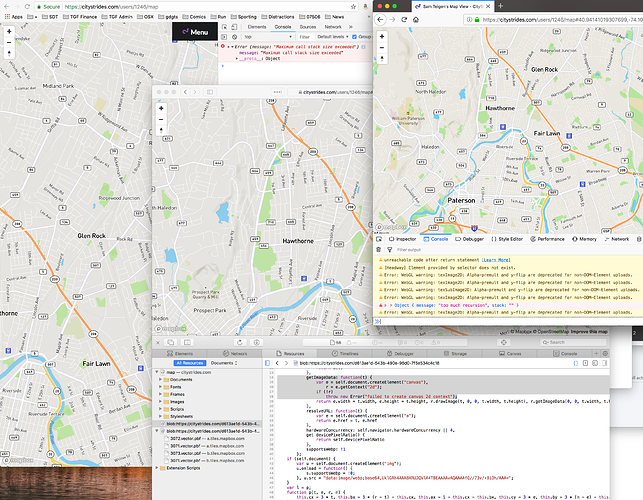 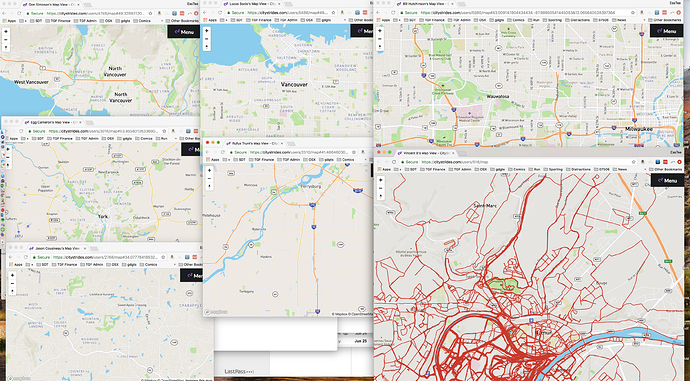 Thanks for the great bug reporting! I’m away on vacation right now, but I’ll work on this when I get back.

I’m unsure if it’s related to some other Mapbox issues I’ve been working with them on - I might be blocked … we’ll see!

My map has been blank for a few weeks now. Not sure what to do ;(

Can you share a link to your LifeMap?
I thought I fixed this earlier today…

I just want to post an update that I’m still working on this … The Mapbox folks and I thought we got this resolved, but it’s looking like there are still some edge cases.
In the meantime, it’s looking like Firefox handles most (all?) of these maps just fine - if you’re in a position where you can use that as a workaround…

Perhaps there's just an upper limit to the size/number of `featureCollection` la…yers that can be added to a map?... **mapbox-gl-js version**: 0.44.0 ### Steps to Trigger Behavior 1. Visit https://citystrides.com/users/5560/map with Safari or Chrome on a Mac (I don't have a Windows computer to test with, and the page loads successfully with Firefox) 2. The base Mapbox map loads, but the red lines do not 3. View the console & see the error Compared to a functional page... 1. Visit https://citystrides.com/users/1/map 2. View base Mapbox map along with the red lines ### Expected Behavior A map should display with tons of red lines on it. The red lines are a bunch of encoded polyline layers. ### Actual Behavior The layers don't draw & the console contains an error. Error as reported in Chrome: ``` evented.js:109 Error: RangeError: Maximum call stack size exceeded at Actor.receive (actor.js:81) Evented.fire @ evented.js:109 ``` Error as reported in Safari: ``` [Error] Error: RangeError: Maximum call stack size exceeded. receive — actor.js:81 [native code] fire (mapbox-gl.js:521:1250) fire (mapbox-gl.js:521:1091) fire (mapbox-gl.js:521:1091) (anonymous function) (mapbox-gl.js:199:1411) (anonymous function) (mapbox-gl.js:199:2541) receive (mapbox-gl.js:501:894) (anonymous function) ``` ### Relevant Site Code While all of this code is available within the page source itself, I've included the relevant section of code I'm using to generate this view below for easier review. The `<%= raw @encoded_polylines %>;` bit is an array of many encoded polylines as constructed within my Rails app. ``` mapboxgl.accessToken = 'TOKEN'; var map = new mapboxgl.Map({ container: 'map', style: 'mapbox://styles/mapbox/streets-v10', center: center_value, zoom: zoom_value }); map.addControl(new mapboxgl.NavigationControl(), 'top-left'); var encodedPolylines = <%= raw @encoded_polylines %>; var arrayLength = encodedPolylines.length; var mapZoom = null; var mapCenter = null; var featureCollection = []; for (var i = 0; i < arrayLength; i++) { featureCollection.push({ type: 'Feature', geometry: polyline.toGeoJSON(encodedPolylines[i]) }); } map.on('style.load', function(){ map.addSource('polylineCollection', { type: 'geojson', data: { type: 'FeatureCollection', features: featureCollection } }); map.addLayer({ id: 'polylineCollection', type: 'line', source: 'polylineCollection', layout: { 'line-join': 'round', 'line-cap': 'round' }, paint: { 'line-color': '#DD251E', 'line-width': 2 } }); }); ``` ### Further Details - Raw encoded polyline array for non-functional page: [polylines.txt](https://github.com/mapbox/mapbox-gl-js/files/1691906/polylines.txt) - The user for the [functional page](https://citystrides.com/users/1/map) linked above has more individual encoded polylines than the non-functional user, so it doesn't seem to be a count limit - Since it's likely not a layer count issue, the only two possibilities I can think of are - **size** - perhaps the non-functional user has larger individual encoded polylines than the functional user - **data integrity** - perhaps the non-functional user has one/some encoded polylines that are 'broken' somehow

I have this problem also.
My map doesn’t show up in Chrome and Firefox.

Is there any fix yet?

No, I’m still working with Mapbox on this one…
Although, it’s possible that your account is just still being processed - I have over 9 million jobs in the queue right now.

Just checking in. My Life Map is blank on Chrome and Microsoft Edge. It was working okay for the first few weeks, but now it is blank.

Unfortunately, there has been no progress with Mapbox on this issue.

I’m going to look into a way for me to identify the problem and skip those bad activities (I’m pretty sure that the issue is that some activities have bad geo data). This could take me some time, though.

I keep on running, but there is still no lifemap for me: Tim Bergboer's Map View - CityStrides
Really hope that this gets a fix soon!

Thanks James for all your efforts.

This does look like the same Mapbox problem linked above.

My map is black. And it’s blank regardless of which broswer I use, PC, Android phone or iPhone. Any help?