My life map is not showing ANY streets or past runs. When I look at my profile individual runs are showing up, but the Life Map is devoid of any markings. This just happened today. I’ve logged out and back in to no avail. Please help, thanks!

Your LifeMap is incredibly not blank for me. 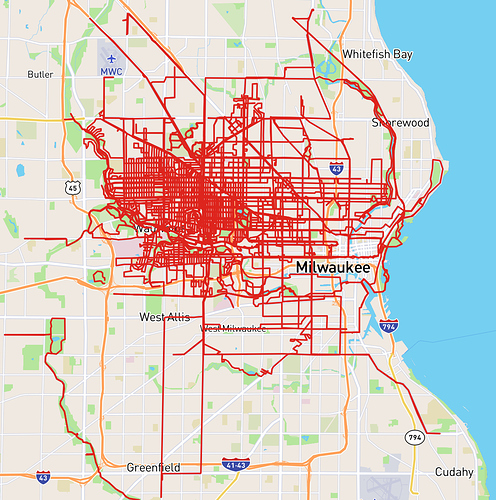 That’s quite a bit of data, I wonder if the browser is having trouble displaying it all…
Are there any errors reported in your browser’s console? You can check this by visiting your LifeMap page, and then…

James - thanks for your suggestions. I followed your instructions for Chrome, this error is listed:

Any idea how this can be addressed/fixed?

I love your site, by the way!

I get the same thing Bill Hutchinson is getting when I use Safari browser, but my map comes up just fine on Firefox.

Any idea how we can clear the “maximum call stack size” problem?

The weird thing is that I can view other peoples stuff, just not mine…

I was also able to recreate the issue within Chrome & Safari. Firefox works fine for me

I’ve submitted this issue with Mapbox & I’ll keep everyone up to date here with how things play out:

Perhaps there's just an upper limit to the size/number of `featureCollection` la…yers that can be added to a map?... **mapbox-gl-js version**: 0.44.0 ### Steps to Trigger Behavior 1. Visit https://citystrides.com/users/5560/map with Safari or Chrome on a Mac (I don't have a Windows computer to test with, and the page loads successfully with Firefox) 2. The base Mapbox map loads, but the red lines do not 3. View the console & see the error Compared to a functional page... 1. Visit https://citystrides.com/users/1/map 2. View base Mapbox map along with the red lines ### Expected Behavior A map should display with tons of red lines on it. The red lines are a bunch of encoded polyline layers. ### Actual Behavior The layers don't draw & the console contains an error. Error as reported in Chrome: ``` evented.js:109 Error: RangeError: Maximum call stack size exceeded at Actor.receive (actor.js:81) Evented.fire @ evented.js:109 ``` Error as reported in Safari: ``` [Error] Error: RangeError: Maximum call stack size exceeded. receive — actor.js:81 [native code] fire (mapbox-gl.js:521:1250) fire (mapbox-gl.js:521:1091) fire (mapbox-gl.js:521:1091) (anonymous function) (mapbox-gl.js:199:1411) (anonymous function) (mapbox-gl.js:199:2541) receive (mapbox-gl.js:501:894) (anonymous function) ``` ### Relevant Site Code While all of this code is available within the page source itself, I've included the relevant section of code I'm using to generate this view below for easier review. The `<%= raw @encoded_polylines %>;` bit is an array of many encoded polylines as constructed within my Rails app. ``` mapboxgl.accessToken = 'TOKEN'; var map = new mapboxgl.Map({ container: 'map', style: 'mapbox://styles/mapbox/streets-v10', center: center_value, zoom: zoom_value }); map.addControl(new mapboxgl.NavigationControl(), 'top-left'); var encodedPolylines = <%= raw @encoded_polylines %>; var arrayLength = encodedPolylines.length; var mapZoom = null; var mapCenter = null; var featureCollection = []; for (var i = 0; i < arrayLength; i++) { featureCollection.push({ type: 'Feature', geometry: polyline.toGeoJSON(encodedPolylines[i]) }); } map.on('style.load', function(){ map.addSource('polylineCollection', { type: 'geojson', data: { type: 'FeatureCollection', features: featureCollection } }); map.addLayer({ id: 'polylineCollection', type: 'line', source: 'polylineCollection', layout: { 'line-join': 'round', 'line-cap': 'round' }, paint: { 'line-color': '#DD251E', 'line-width': 2 } }); }); ``` ### Further Details - Raw encoded polyline array for non-functional page: [polylines.txt](https://github.com/mapbox/mapbox-gl-js/files/1691906/polylines.txt) - The user for the [functional page](https://citystrides.com/users/1/map) linked above has more individual encoded polylines than the non-functional user, so it doesn't seem to be a count limit - Since it's likely not a layer count issue, the only two possibilities I can think of are - **size** - perhaps the non-functional user has larger individual encoded polylines than the functional user - **data integrity** - perhaps the non-functional user has one/some encoded polylines that are 'broken' somehow

Small Update: I’ve found that it’s something within Mapbox’s code… An older version of their plugin works properly, while later versions do not. I’ve left the old version in place - so you should all be able to see your LifeMap again. I’ll continue working with Mapbox to see if I can help figure this out for their future versions.

Thanks for looking into this. I’ve downloaded Firefox and can now again stare (obsessively!) at the LifeMap! Keep me posted on how things go w/ resolving Chrome. FYI - I didn’t mention previously but I also had tried Explorer and had the same error there.

Just to mention that I also have this problem.

I found that the problem is bad data. Here’s an example activity (for however long the link remains active):

Bill’s quite the geometric artist, working off the coast of Ghana.

Now that I know the cause of the issue, I can start looking into how it can be fixed…

Nice… I’ve been (not) seeing the same thing

Just curious if a solution has been found as I two am having the issue. Wasn’t sure if it was caused by indoor/treadmill running?

I don’t know if this is useful to add… 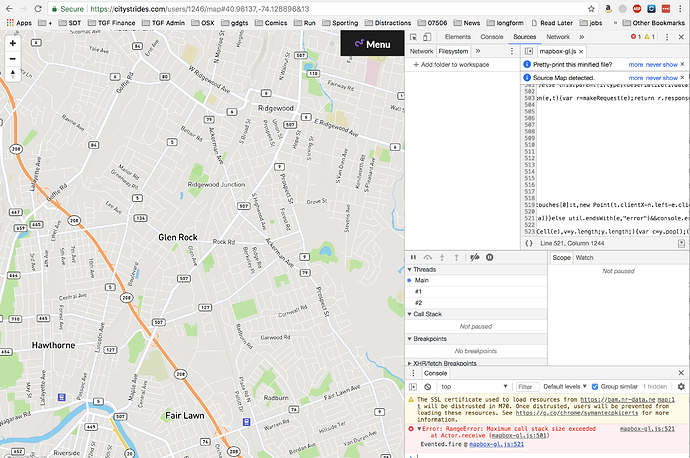 21%20AM2686×1784 1.16 MB
… In other news… it’s actually a nice challenge for me to target streets without referring to the map. My wife is also happy that i’m not spending hours staring at a map… only minutes seeing if it’s restored…

samteigen - In case you need to sneak a peek at your LifeMap you should be able to access it via Firefox browser.

Thanks for the reminder. I had to update firefox to the current version for it to work.

When I open my LifeMap I don’t see any of my runs. I can see other people’s LifeMaps and theirs looks fine.

My map is just an empty map even though I can see my activities have been synced and it shows 21% complete.

I’ve tried using different browsers and computers with no success.

Any idea what could’ve caused that?

I have the same issue, it’s all disappeared…

Have a look here, there was another post on it recently. @JamesChevalier gave tips on looking for errors in various web browsers.

i can see my activities from strava but they don’t show up in my lifetime map??? any ideas?