Some Streets contain Nodes outside of City boundary

Reviewing cities after the Global Coverage update, it seems that there are some streets with nodes outside of the city boundaries that are counting toward completion of that street.

An example can be found here:

2 posts were merged into an existing topic: City and Street progress missing

Since the recent upgrade, some streets and/or nodes in Burnaby are showing up as incomplete on my Vancouver map. The roads are on the Burnaby side of Boundary Road.Here is one example: 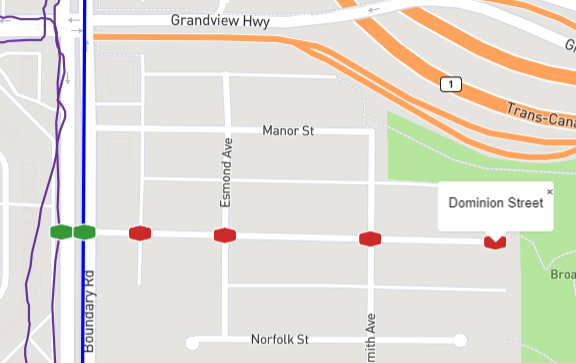 Same road name in two cities show up as the same road in Citystrides
zelonewolf (Brian Sperlongano) December 15, 2019, 11:20am #6

See bug below with street in two different cities: 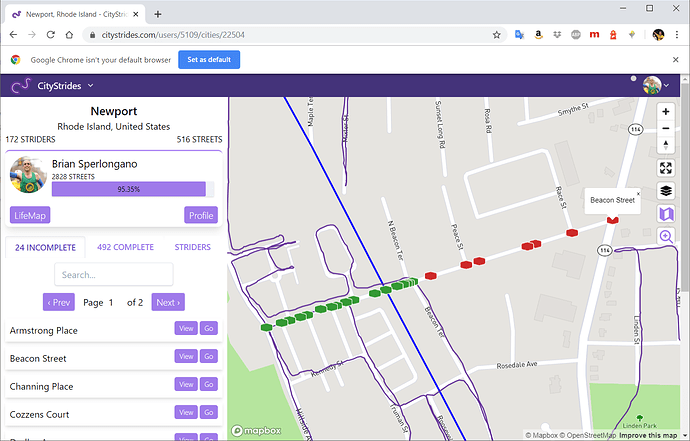 Yeah, that was reported in Some Streets contain Nodes outside of City boundary

I’ve since updated the query to ignore those nodes, but haven’t cleaned up the existing data.
I’m going to merge this post into that thread now.

One thing one could do with these streets that have nodes crossing the city border, is manually completion. The fact is, you did actually run the part within the city border, so it’s not cheating. And the street will be correctly in the dB when James cleans the dB sooner or later.
The same street is also available as a whole street in the other city where the not run part is in. so you are not deleting or completing that part with manual completion.

Ahhh… good to know, thank you! I was worried that completing the street would complete the full street and not just the part inside the city boundary. 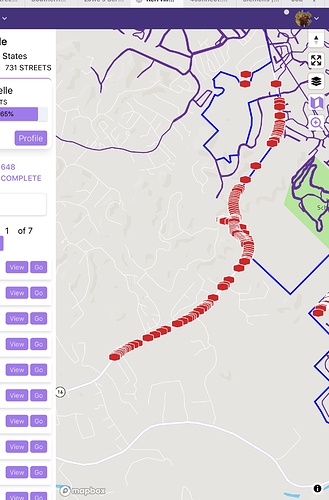 My town has numerous roads leading into the country that extend outside city limits for anywhere from 2-20 miles. See example pic. Is there away to remove these nodes? They are highways so not always the safest place to run.

I’ve already fixed the query, so new cities will not include nodes outside of the city boundary.
I have not yet cleaned up the existing data. I probably won’t get to that until after the global update work is done - we’ll see.

My town has numerous roads leading into the country that extend outside city limits for anywhere from 2-20 miles.

Exercise is good for you. Get out there!

Haha. Yes but I prefer to run on safer less busy streets where the speed limit is not 55-70 mph.

Good point. If the roads are officially not runnable or too dangerous. I recommend changing the tag of that road/street in OSM to ‘foot = no’. The next update will exclude that one for citystrides

I live and run in Deland, Florida, USA. This city has a very convoluted city boundary, with several pieces of unincorporated land inside the city. When I look at the map here (DeLand, Florida - CityStrides), the boundary is visible, but there are red dots both inside and outside of the city.

My question is whether I have to run through the red dots outside the City boundaries as well as the ones inside in order to get credit for completing the city. Admittedly, given how fractal the city boundary is I’ll probably be running through several of those sections anyway. But some are a little off the beaten path, and would be nice to skip if possible.

This is a know issue that came along with the Global Coverage Project.

@JamesChevalier has fixed the underlying code that included nodes both inside and outside the boundary lines, but until the update process is developed and rolled out, either waiting or manually completing streets that you have completed all the nodes within the boundary is the option.

Thanks for merging it. I didn’t realize this had been discussed before.

I have a lot of the city to run, so I’m not going to worry about those streets outside the city for quite a while. And by that time, you’ll probably have made the question moot.

I just encountered this while running the northern edge of Seattle. But since I’m on track to finish 100% of the streets here in… checks notes… three years or so, I’ll just wait and see if updates have resolved it by then

This thread certainly puts me in a better peace of mind.
I started on working on the small town of Troy, Ohio in May. Among my white whales in Troy are Troy-Urbana Road and Arthur Road. This morning, I ran Arthur until I saw it was 718 at an intersection sign and turned around. Also ran Troy-Urbana until I was pretty sure I was outside city limits before turning around - both were still showing progressed. I did kind of figure this was a known issue, seeing it is in writing puts my mind at a better rest. Troy is full of a few quirky roads I have had to manually complete already - to me, finding some creative ways to truly complete those roads after manual completion is some of the fun. Pretty sure I have trespassed a couple of times lol 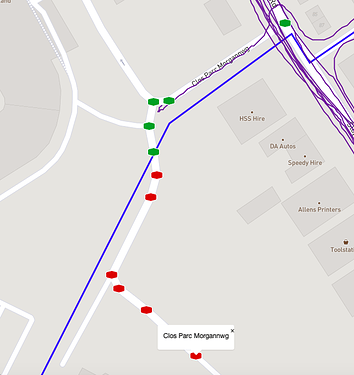 09645×681 76.1 KB
This street is in Cardiff, which used to be a city and is now split up into mini ‘cities’, as you can see the street crosses the border and all nodes in Canton (above the blue line) have been completed and yet the street is in my incomplete list.
Obviously I intend to complete the red nodes, but they’re in Grangetown. Do I need to complete the whole street to update both cities? Or is this an error?
JamesChevalier (James Chevalier) September 29, 2019, 9:56pm #22

I would have expected the street to stop at the border.
With what I’m seeing now, I expect there are two streets with the same name and one is in Cardiff (or whichever smaller “city” it is) and the other is in Grangetown. I’d expect both streets to have the exact same nodes as well.

If you want to post in #global-coverage-support about making Cardiff its own full city (if you haven’t already, I think we’ve already discussed this somewhere) I can work through that with you.