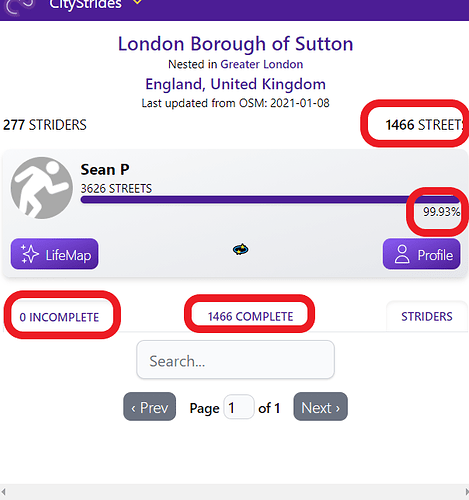 Prior to this update, in order to complete the city, I manually completed a few streets (17 as far as I recall) that had ‘zero nodes’ and since the update my manually completed count has dropped to 0 so they appear to be fixed. However, the ‘% complete’ calculation seems to be working from a total of 1467 streets so I think there is a phantom street hiding somewhere in the calculation.

I’m not entirely convinced this is another ‘zero node’ issue because when I’ve looked at those threads, there is usually a discrepancy between the number of streets in the city and the sum of incomplete+complete whereas in this case there is not.

Any help would be much appreciated as 99.93 is the saddest of numbers. 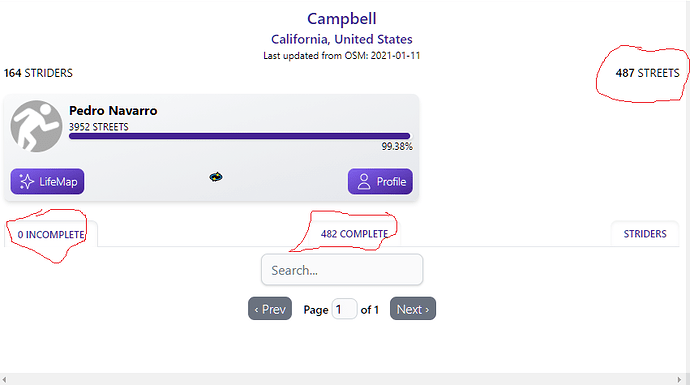 Happening to me as well. Was at 100% for Pflugerville Texas, now it is dropped to 97.39% but shows 0 Incomplete streets. 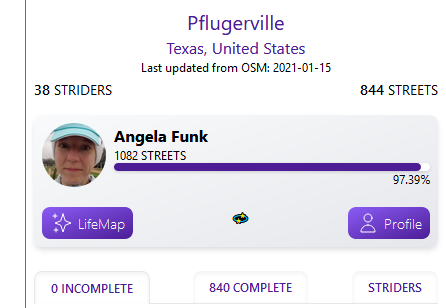 There must be something in the update code that isn’t properly updating the percentages when the city updates.

I have the same thing going on with one of mine that updated this week.

It looks like there are (at least) two issues…

I’ve marked this post as the “Solution” so that it’s pinned to the top of the thread while I work on it. I’ll provide status updates here as I work to completely fix this issue.

As of January 28th, issue 1 (The street count is not being updated on the city) should be resolved. I spot-checked a few cities and the counts lined up.

Jan 30: I think I just spotted the problem for the percentage values not being updated. It looks like an easy fix, if this turns out to be it. Keep an eye in #announcements for details on when that’s released.

Oh no, I’ve just realised Islington London Borough of Islington, England - CityStrides has this issue too (though it hasn’t been updated this time around yet). Does this mean I’ll never get to 100%? Was hoping I would be one it’s been synced

I think there is a third issue: see Leidschendam-Voorburg, Zuid-Holland - CityStrides

My percentage was updated (the city dropped in my city list), but I cannot make the calculated percentage correct for either the stated number of streets (644), or the actual number (619). Based on my percentage (3.55%) and completed streets (41) the total should be ~1154, which is way off. So that makes me think there is another issue.
I checked the top striders in the city too, an their percentages are off too, although for all of them it seems to imply a total of about 675 streets.

@JamesChevalier Maybe you could take the number of completed + uncompleted streets (that is always the same for all the striders) as the total number to be shown in each city?

It looks like it’s impossible to reach out 100% if having 0 uncompleted streets shows a 98.64% completion.

I moved your post here, because this is the more relevant thread for the issue you’re pointing out.

I’m keeping notes on my progress in the “Solved by” post that’s linked from the first post in this thread. This is the direct link to that post: No longer at 100% since new update - #5 by JamesChevalier

The good news is that the street count issue should be resolved now. New updates will resolve that issue going forward (and I’m going to see if I can manually fix the existing cities with this issue).

There’s still a lingering issue of some percentages not being recalculated after the update. I’m still looking into that.

Not sure if this is helpful or not, but I’ve got a bit of a variant on the theme here in Medford, MA Medford, Massachusetts - CityStrides

I was the first of two to 100% by a couple months I think (finished up over the summer). Now it seems that I have been bumped back down a bit and the second finisher is still at 100%. So perhaps there is something to do with how recent the data is as well? Not sure how that would factor in. Perhaps not so helpful, but thought it was worth throwing out there.

One possibility is that the other runner ran roads that weren’t in CityStrides at the time. (I’ve been busy adding roads to OpenStreetMap, some of which I’ve run.) When those roads didn’t exist in CityStrides, they didn’t affect either of your percentages. However, once those streets were imported into CityStrides, they showed up on his completed list since he had already run them, but they weren’t on your list since you didn’t know there were there.

I’m not saying that’s what happened, just that it’s a possibility. 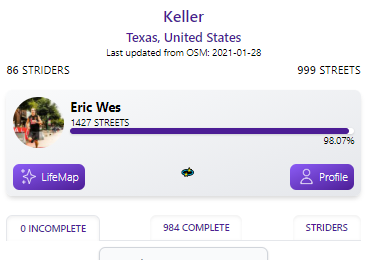