I haven’t looked at my profile in a while so maybe this question has been answered.

I finished the city of St Paul, MN is April of '21.
When I look at my map now it shows only 91.x% complete.
When I look at the missing streets none of them are new streets and some of the streets show that a run has happened on that street.

I haven’t removed any connections (Garmin and Strava).
The dates of the missing runs are not grouped. They are spread across the year I took to finish the city.

Any ideas or things I could do?

If you look at one of the missing streets, do they show a percentage below 90%? You will se the missing nodes in red. Are you saying your LifeMap shows you have actually ran through these? It’s not a GPS error so your route came to far away from the nodes?

None of these roads are new.

Any idea why this would be?

Oy. Going through all my runs for the year to figure out which ones are missing is going to be a chore. When I ran all the streets I moved around a bit so it may be hard to narrow down the date range for when I did runs.

The image is an example of a missing street and an area that is missing runs.

I guess if finding the dates is the only way I can dig in and find some date ranges.

Yes, that Crocus Place looks a bit strange, but instead of pressing Show, press Go. What does that show, you should see a percentage and the number of nodes, and the ones CS thinks you’re missing are red, like in my example here. 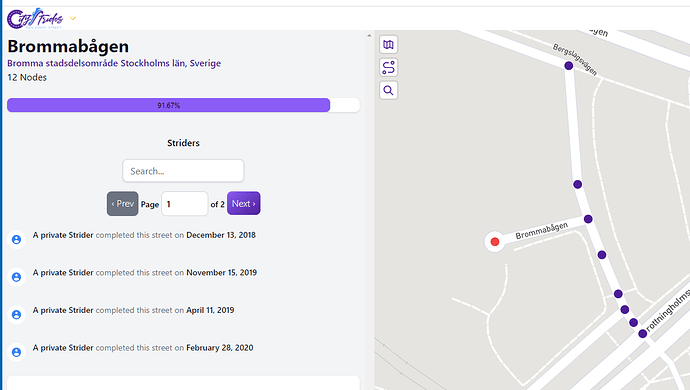 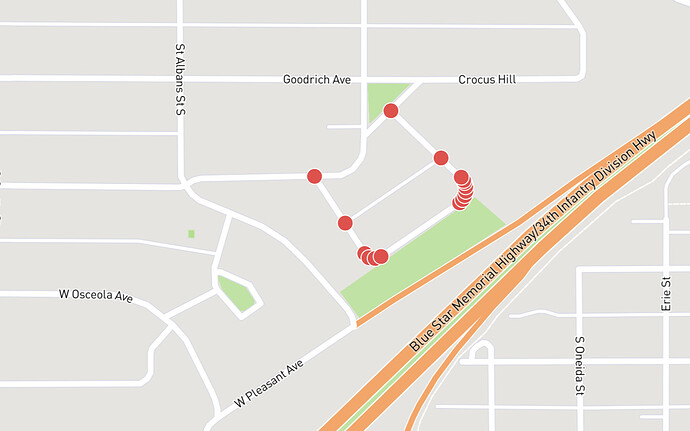 Here is the shot for that street with Go instead of Show. 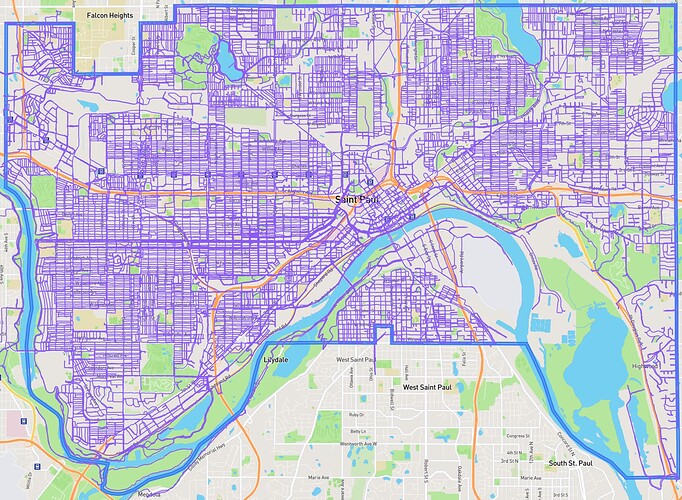 Now it shows me at 91%. So somehow I’ve lost credit for nearly 10% of the runs. That is what I’m wondering about. Where did those runs go?

Well, as a fellow user/runner I tried to see if there was anything obviously wrong, but there must be something weird going on with your account, so I’m stumped. I think @JamesChevalier needs to take a look here

[Just in case you didn’t] You may have noticed if you hover your mouse pointer over a purple line (on your LifeMap) the date for that activity will show up. Sometimes it’s a little tricky to point in the right spot, but it can be done. That could identify when the activity was.

PS. I’m sure you noticed, but just in case… I don’t want to assume anything.

@hans1 thanks for your help in thinking through this. Sorry if my response came across as not appreciative.

@ericjrw that an be helpful where it seems like the run is goofed up for some reason. Finding my runs in Garmin or Strava that are just simply missing will a bit more challenging.

@JamesChevalier if you have any ideas beyond trying to find and reload the runs, that would be great.

I’ve started some reprocessing jobs for your account to see if that adjusts anything… In the meantime, I see that you have 720 total activities: 25 from Strava & 695 from Garmin. Does that match your count from those services (keeping in mind that CityStrides will not have duplicates)?

Garmin Connect shows a total of 2050 activities. That would include a few Bike, A bunch of Yoga and Strength. I would think I’d be closer to 1500 runs. I guess it would depend how far back CityStrides will pull from Garmin.

Not sure how long the re-processing should take but I do see it is making a difference. It’s moved from 115 incomplete to 12 incomplete.

I can tell there are still runs missing because the lifemap is showing gaps that have been covered before.

Again, thank you for doing the reprocessing.

I spent some time today to find specific runs and it looks like there is at least one gap in the City Strides data from March 15 2020 to April 24 2020. That would pickup a bunch of the missing data.

The runs do exist in Garmin but not in City Strides.

FWIW - I’m in the same situation as the OP. I was at 100% for (old) Ottawa a few months ago and am now at ~ 80% missing giant sections of roads that my strava heatmap shows I’ve run.

Is it possible CS isn’t grabbing all the activities from Strava?

@tonycmachado do you know the date ranges of your missing runs? I’m curious if they are similar to my missing runs.

Garmin Connect shows a total of 2050 activities. That would include a few Bike, A bunch of Yoga and Strength. I would think I’d be closer to 1500 runs. I guess it would depend how far back CityStrides will pull from Garmin.

CityStrides only pulls in the run/walk/hike types (there are number of them that fit into this categorization). Garmin also only allows me to pull activities going back 5 years from the time you connect to CityStrides.

Yeah, I noticed the reprocessing almost immediately update your percentage.

That’s odd that activities disappeared from CityStrides. I’m more inclined to believe that they never arrived in the first place, since you’d have to be deleting them in Garmin or clicking the delete button here in CityStrides.
It could also happen if you revoke access and then come back (it would delete everything and have to re-sync), but that’s not the case for your account … the dates don’t line up with that idea.

Unless if they had no GPS data & I did some cleanup - but then you never would have seen them in the first place.

I just requested that date range from Garmin, but their API is extremely limiting, so let me know if you don’t see those come through by tomorrow morning.

FWIW - I’m in the same situation as the OP. I was at 100% for (old) Ottawa a few months ago and am now at ~ 80% missing giant sections of roads that my strava heatmap shows I’ve run.

I did notice a few 2020 activities just sync in for you. Similarly to Andy’s situation - I have no code that deletes data on its own, it would only react to deleting within Strava, changing them from run/walk/hike to e.g. cycling, or clicking the delete button in the site.

Hmmm… so some additional clues if it helps.
That date range was before I connected to City Strides. I started my project 4/9/2020 and it was some time after that that I discovered City Strides.

I do know that those streets and runs were in City Strides at one point. I have an animation of all the runs from 4/9/2020 to 4/9/2021 and you can see the streets were completed.

If I recall the Garmin connection happened sometime later in 2020 so those runs would have come from Strava initially. But Strava is still connected also.

I guess there is a chance that I connected Mapmyrun early on and then removed it later. But I don’t recall that happening.

Regardless, thank you for helping correct this.

I do see that I’m up to 99.85% complete but the lifemap hasn’t updated yet. I’ll check it again tomorrow.

A post was split to a new topic: Some nodes/streets not marked as complete