I've hit all the nodes, but the street is still 'incomplete'

I’ve tried this as well, however when I mark the streets, wait a day & then unmark them they go back to incomplete.

@alewijnsej, you may need to wait for the city to update (from OSM). On the city’s page, there is (now) a “Last updated from OSM:”. I’m in the process of waiting (patiently) for the next update, which I’m hoping will resolve my node-related woes. Oh, should happen roughly monthly (I think). If I recall correctly, even manually completed streets will complete normally, an unmark the “manually”, when the update occurs. PS. Hope I understood that correctly.

I’ve got one like that in my city. It was last updated October 10, so I’m (not so) patiently waiting to see if it gets cleared up on the next update.

I’ve tried this as well, however when I mark the streets, wait a day & then unmark them they go back to incomplete.

I've hit all the nodes, but the street is still 'incomplete' Support

I suspect this is related to the zero-node street issue. Burma Road has 6 nodes, but its stored count is 7 - this is prohibiting you from completing it. I don’t think you need to run a sync, because unmarking streets kicks off a set of jobs to do some extra processing.

Visit the street’s page & check if the nodes count displayed matches the number of nodes displayed on the map. Hopefully it’s just a city-update issue that’ll be fixed in the next update.

Hi James, thank you. I’ve got about 10 streets I’ve run several times, die to having a higher node count that being displayed.

I looked at other users that were able to complete them. I copied their routes & ran them, ran in different directions, ran all the side alleys etc. No joy.

I’ve marked them manually but that feels like cheating. On the upside, I’ve logged a lot of extra km’s!

I’ve marked them manually but that feels like cheating.

When the update code resolves this issue, the system will automatically re-calculate your manually completed streets to actually completed.

Hi @JamesChevalier, is there any rule on every how many weeks/months you update a city from OSM? Thanks! 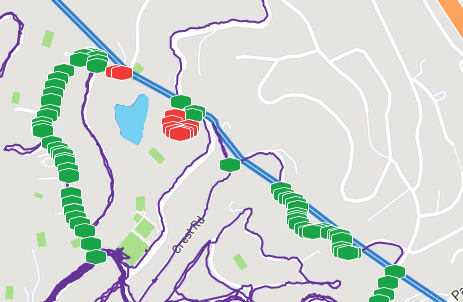 I have a problem here. Somerset Rd (on the right) is ENTIRELY finished, it is showing all green nodes and somehow subtracting from my progress.

Can you send us a link to Somerset Road? That way we can see what it looks like without all the extraneous stuff.

This displays 24 nodes, but shows a 34 node count. This is related to the zero-node issue … the city update code seems to be exiting early, causing it not to update counts properly. The last updated date for Piedmont falls in line with that bug. I would expect the next update to resolve it.

I’m curious if others who have hit this issue have seen it automatically resolve over time? I’ve noticed I’ve hit it myself - a street where I’ve hit all 23 nodes. City strides says I’m 100% done - but the road is still incomplete. Here are the details:

I do notice that the text says 36 nodes - yet only 23 nodes are displayed on the map.

Ah, yeah - that graph isn’t using the cached Node count, but the code that marks a street as complete does. (Each Street has a value on it of how many Nodes it has, so the system doesn’t have to constantly send out “count” queries to the db)
This looks like an issue of the nodes count not being updated on the street after the city gets an update. Bracknell was last updated on January 24th, which is a few days before I resolved that issue. I expect the next city update to resolve this issue.

There does seem to be an ongoing issue of street counts not being updated properly on cities. I’ll be interested to know whether or not this similar node count issue also still exists…

Hi @JamesChevalier - thanks for the response. Is there a way that I myself can check when a city was last updated? And are you suggesting that with the next city update, that this issue should be resolved and the road will be marked complete?

Is there a way that I myself can check when a city was last updated?

And are you suggesting that with the next city update, that this issue should be resolved and the road will be marked complete?

Yeah, and I just updated some code that I’m hoping fixes a couple other issues. I just started an update for Bracknell. The actual update just finished, but the recalculations haven’t finished yet - that could take some minutes.

Let me know how things look in a bit…

Thanks for looking into this @JamesChevalier

I assume overnight is enough time for updates to calculate etc. However nothing has changed. I can see that no one has completed Bond Way. I’ve done 100% of the nodes that appear on the map (all 23 of them) But the street status view still suggests that there should be 36 nodes to do.

OK, I’ve got more/newer code released that I think should fully resolve this. It looks like there’s about a 10 minute delay on recalculating progress - let me know how things look in a little bit.

@JamesChevalier Thanks James - looks like it’s all sorted now. 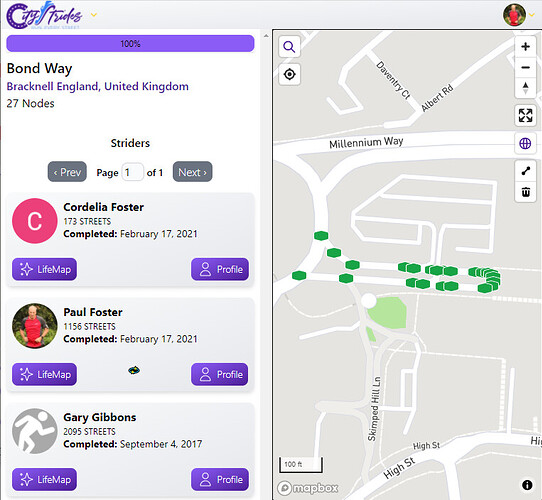 Hi @JamesChevalier I’ve run into a number of streets in Vancouver that also have incorrect node total counts, and so my progress is not “completed”. Does something need kicked off for the city?