Hi, still loving this, but have you considered adding in a cycle option either within same maps but different coloured lines, or a sister site. As a runner and cyclist it would be something i would very much like to see, especially as ridss are longer hopefully would cover more of the country.

I agree, this is in fact what I came hoping to find. Alas, as a cyclist only the running side of things is not much use for me. I would definitely say separate maps would be the way to go.

You could use different colors for running vs biking.

Was there any progress on this? Would love one of these.

Context is already there surely, just need to change the activity type.

Just wanted to follow up with the hope that you could add cycling imports from Runkeeper as well. I’m not interested in any sort of contest or anything like that but the site is so great for running and I would love to be able to see my biking routes as well. Thanks!

im working on trying to ride every street in my county. adding cycling map would be great.

Just became very dissapointed to learn CityStrides only maps walks/runs. Support for cycling would be amazing.

This is something I mentioned to them a few years ago and I was told it was something that they are looking to do but they need to split it somehow from the run side. A triathlete it would be amazing to see both

Any chance this is still a possibility? I have been wanting to bike more but I’m addicted to tracking here and hate to ‘waste’ exercise on something that’s not contributing to my citystrides! Would love to see some kind of bike implementation.
EDIT: seems like this could be a great paid add-on feature.

Would definitely be excited to see this added, as I bike to work and often change up my commute to his streets I haven’t ridden before. I would love to be able to track where I have and have not ridden.

+1 for me. I was wondering why my first few days of cycles didn’t sync with CityStrides

Just wanted to bump this as cycling would be a very very very welcome addition. Us bikers want to track our city progress too!

For those unaware, there is another site called wandrer.earth that does cycling only. I use both CityStrides and Wandrer to track all my exploring.

Thanks for the heads up!

Kinda wish I could see a bit without having to log in.

Oh, well you would sync to Strava like here to get started. I think he’s charging $ now for new users to sync more than their last 50 rides. There are leaderboards for counties and states based on points that are earned by completing new miles and completing towns. Everything is based on miles completed, not # streets. Biggest con is you can’t manually complete roads like with CityStrides, so finishing certain towns is almost impossible, even with a gravel bike. 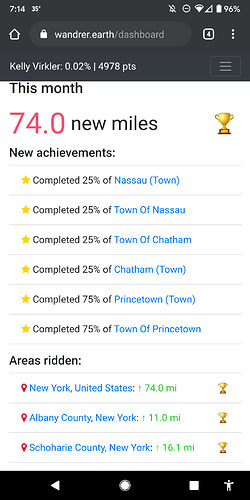 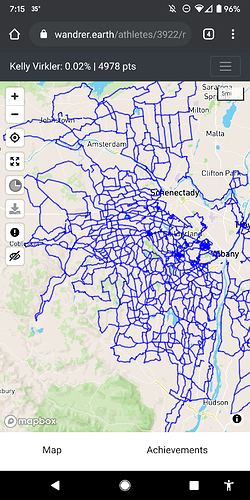 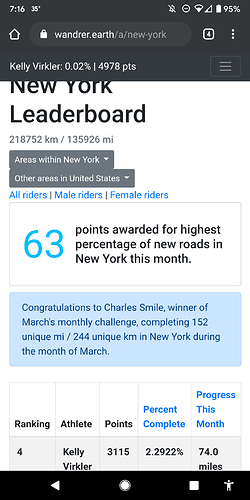 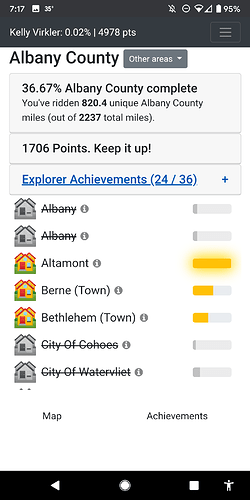 Thank you for that info and screen shots. At the moment, I really only ride to run errands (when I’m in a hurry and can’t literally “run” it). My wife and I also have a tandem, but we tend to ride the same route.

It’s interesting you mention gravel. I have a friend in Dallas, and he’s really into gravel rides. So I shared the link.

How would they get by the API situation if they are syncing via Strava? Once there are more users, I could see them running into delays similar to what CityStrides is dealing with. I would think one of major hurdles James would run into if he were to incorporate cyclists would be the API issue with Strava.

It always made sense to me for “CycleStrides” to be an entirely separate integration / website. In which case perhaps the API limits are separate.

Definitely agree that separate site makes sense, especially if existing services like wandrer.earth that @laracroftny mentioned above exist and are already built out.