One thing I couldn’t figure out: how to edit my route.

I haven’t build editing capability yet

FYI, on my machine (Chrome on MacOS Big Sur), the Route Builder controls lie on top of the map zoom in/out buttons, which are therefore inaccessible, as shown in the attached image. 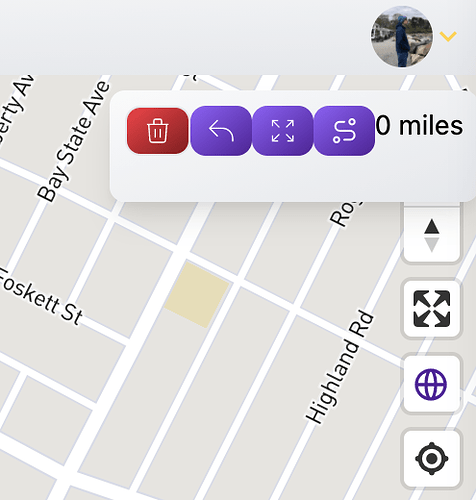 And, since I am here mentioning the zoom in/out buttons – I would love it if those were a little bit lower on the interface. When I move my mouse to those controls, I find that I often accidentally move over my profile pic, triggering the menu with Lifemap, Profile, etc. (But maybe that’s just me.)

Yeah, I noticed that. Odd - locally it doesn’t do this for me. I’ve got some minor changes I plan to release soon & I’m hoping that’ll take care of it. 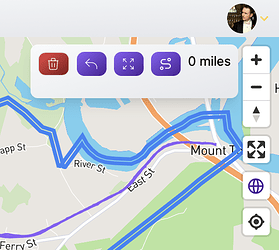 The trouble with lowering that container is on mobile - it’s already a crowded space.

I mean… I guess the new version is slightly better than the previous version.

If you are in to new, sleeker functionality and all.

Well that explains why I couldn’t find it!

The version I used a couple days ago let me add “nodes” in the middle of existing lines and drag them around, so that’s what I was looking for again. (Not necessarily the best solution, just what I thought would still be there.)

Yeah, it’s a bummer to lose that mid-route editing ability… I’ll have to think that one through…

I did move the container from the top right of the map to the top left, though. Progress!

wow, it’s very cool!
No need for me to use Strava anymore. Routes tool works great for my needs! Thank you!
and knowing which streets will be completed is really very practical!

Question for Garmin owners: Which apps have you tried, to get guidance on your device? I haven’t even looked yet, but I’m super excited about this.

I am using rungo a lot since the change from strava routesetting to paid. And garmin connect is sometimes also used, it’s cool to run with the maps on my fenix 6

When I use the builder from LifeMap, I can’t see the controls… PC, Chrome 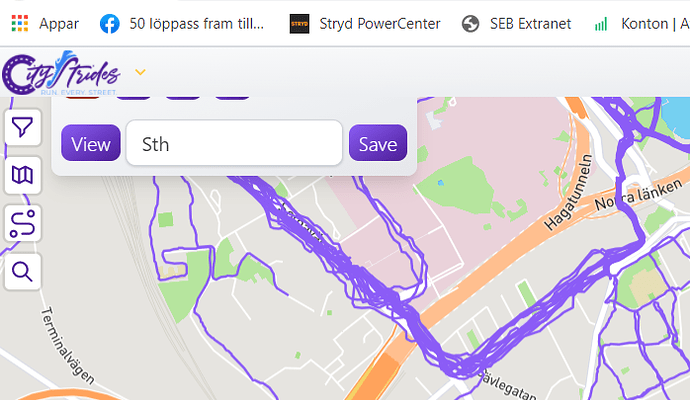 When I use the builder from LifeMap, I can’t see the controls… PC, Chrome

Thanks for reporting this … I’ve got a fix that I’ll be able to release sometime today.

Just want to say I had no particular interest in a route builder, I have my own methods for CityStriding, but for my long run today I wanted to connect a few rural, isolated hamlets and villages and so experimented with building a route last night. Not only was it super easy to do, it was extremely practical for the 27 km run where I found myself looking at my phone a lot less and enjoying the surroundings a lot more. So, great work again @JamesChevalier !!

This has been a great update. has been working very well. I would love to see the ability to minimize the route information so that i can see the map full screen on my phone. I use that sometimes in combination to my current location to follow the route.

It looks like Map only (mostly) view could use some upvotes. I thought there was another post about an idea of a slider, allowing us to drag the map to whichever size we want - I can’t find that now.

I just realized that (because of the changes in Updates on November 1, 2020) I can very easily add a button to toggle between a full screen and regular-size map. lol this will be in the next release, then.
ugh, I’m really stacking up the buttons in this map

So is there a way to handle shortcuts across non-roads? Sometimes I find myself in a neighborhood with a lot of cul-de-sacs, and I cut through the end of them (there are sidewalks there) to the next street. It seems builder makes use of only roads, not paths. No a biggie, as I’m still going old school paper map method, but I hope to change.

edit: would be cool to drop a pin that is simply straight-line connected to next dropped pin.

Yeah, the far right button turns the auto-routing feature on/off. You’d turn it off, draw your straight-line route, then turn it back on once you’re on the road again.

load it into my watch

Which watch are you using? I’m intrigued by this GPX idea.

Does Route Builder produce anything that could be used on a watch?

I have the FR235, and it’s not very sophisticated when it comes to routes. I know there are some apps, but last time I looked it seemed like too many hoops had to be jumped through (need to upload to a site), so I am finding a printed map is easier.

I have a Suunto Trainer Wrist HR.

For me it’s easier to follow the track on the watch.

Thank you for that @Marjorie!