Personally, I find some GPS jitter to be quite pleasant when viewed on the LifeMap. It visually calls out more-active areas without any effort on my part. It’s just when GPS accuracy is way off that it becomes problematic.

What if there was some kind of interactive UI where “teh codez” snaps the activity’s path to streets as best it can, and then allows you to make corrections? As long as the initial snap was decently accurate, and the correction process wasn’t mind-bogglingly tedious it might work out ok…

Mapbox has a Map Matching API (demo) that could be used. Their draw tool (demo) is really good too. If you go there and draw a polygon on the map, then click one of the dots it automatically adds midway points which you can click & drag - so that’s the UI I would use for the corrections.

Update: It doesn’t seem like I was clear enough - I would NOT implement this as an automatic / every-activity feature. This would be a manual process that you might do on a few activities - for example, those activities when you forget to turn of tracking… or where buildings cause your GPS tracking to push you a block over.

I’m with you, James. I wouldn’t be opposed to being able to fix something if the GPS is the problem, but I really like how the lifemap gets thicker and thicker on our well-traveled routes (like an unintentional heatmap) and would be disappointed if every run were automagically changed to match the street map. 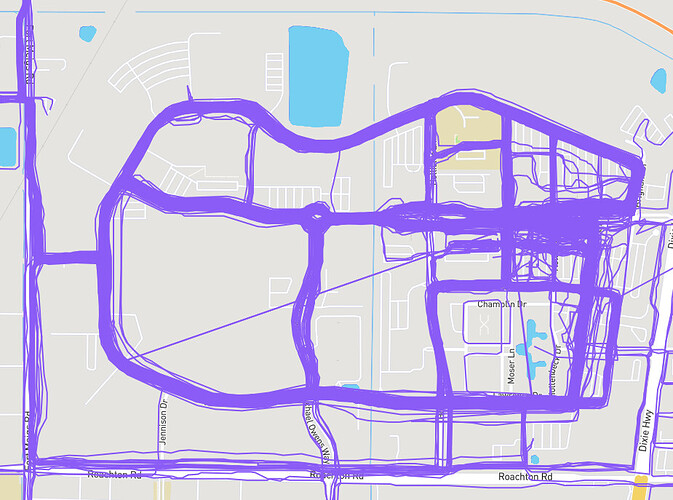 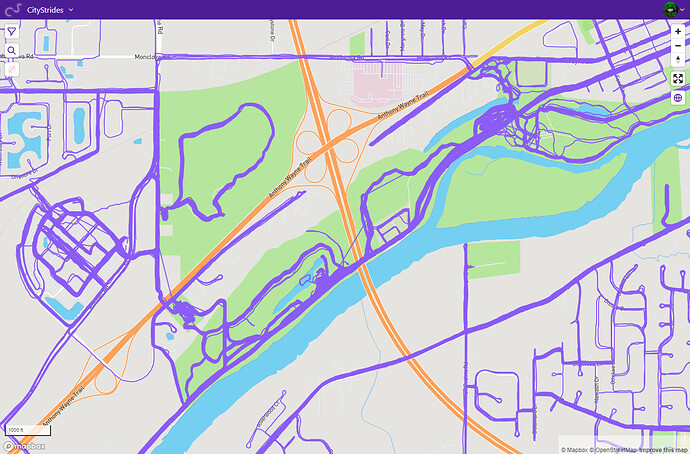 and those aren’t even near my house… 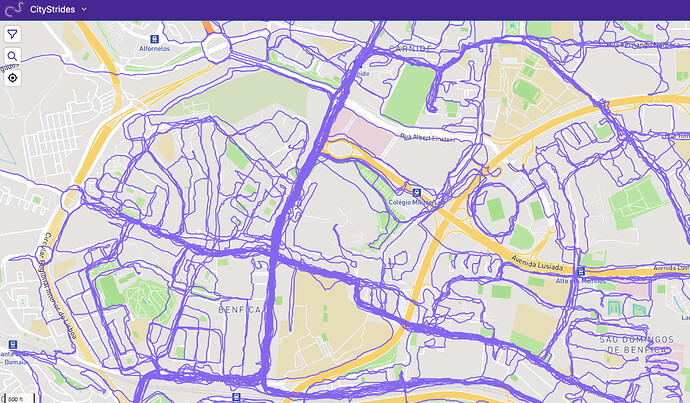 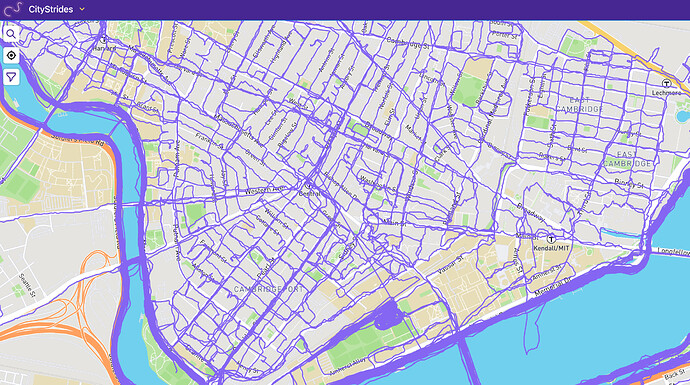 Just seems like some parts of the cities I’ve run (Lisboa and Cambridge) get terrible GPS spreading. I’d love to keep the density of frequented streets, but while I’m proud of the coverage I’ve made, I’m also jealous of the clean lines some folks have!

I’m also jealous of the clean lines some folks have!

Yeah, this brings up a worrying aspect of this idea. I don’t see ANYTHING wrong with either of your screen shots IF you never lost out on progress.

We’re a fairly obsessive group, and I do not want to put something out there that’s going to send people down a useless path of “cleaning up all their activities”. I can totally understand snapping an activity because some Nodes were missed (I haven’t forgotten about User Setting: Hard Mode) but it would be such a monumental waste of someone’s time to go and snap activities just to “clean” them up. Not to mention how much that would cost me.

Edit: I do notice in the lower right corner, there’s an activity that crossed over Memorial Dr & went into the water then came back - I can understand wanting to fix activities like that as well. Oh, and the activities where you forget to stop tracking and then drive across the county - those would be good candidates for editing as well.

I don’t want to complain about the overall squiggly lines, in fact I included the larger picture to try and show the contrast between (in the Cambridge example) the area around MIT/Kendall Square to highlight where tracking is better/worse.

Probably better to provide specific example to your ‘losing out on progress’ point, one in more recent memory: I tried to run Rua Raquel Roque Gameiro in Lisboa, Lisboa - CityStrides on July 27 CityStrides but had to go back on August 22 CityStrides I’m sure I ran to the end of the dead-end both times, but as you can see from both

traces, it’s kinda just luck whether the trace registers as close enough or not to the terminal node!

From my perspective these are totally GPS problems and not a CityStrides responsibility, but hey you brought it up and it sounds cool to me!

I’ve got one run that’s way off on GPS trace and it bugs me. So I was going to re-run it at some point. But if there is a way to edit it I’d be interested

Hi!
I also do have the occasional missed node at the end of a dead end. Or the sidepath that is too far away from the middle of the street. And it’s annoying. My solution is normally: just run it again. Yes sometimes twice. Or both sides of the road. That’s ok. After all running is the main point.

I agree with Kevin: this is a GPS issue, not a CS issue.

Besides rerunning there is also the option of marking a street manually complete. Or creating a GPS route and upload it to Strava/garmin/etc. as an activity. Or maybe even getting a better GPS device…

In my opinion these are sufficient options that I can chose from in order to fix GPS errors. Plus an automatic snap to road feature will come with its own new issues, like wrong snapping, the inability to distinguish the single runs on the same road (and the click to vieww them), no thicker lines for frequently run roads, as JP mentioned.

For me it would not be worth the tradeoff. I’d give priority to topics like hard mode, OSM updates, second/third/etc. completion, maybe some running stats,… oh, and did I mention hard mode?

Yes, I totally agree with Inqu and JP on this part:

the inability to distinguish the single runs on the same road (and the click to vieww them), no thicker lines for frequently run roads, as JP mentioned.

So IMHO snapping would not be a good alternative!

Clearly what is needed is snapping, but with a random offset to keep the lines squiggly

I don’t think auto-snapping would solve the issue of super wonky traces in dense high-rise areas. It’s sometimes impossible to tell the actual route from the trace, let alone whether someone went down some 50m dead-end to hit a node, so it would involve a significant manual component anyway.

I can already “fix” traces by uploading garmin → runkeeper → citystrides, so I agree with those saying it’s not a priority and that there are citystrides (as opposed to GPS) topics that I would prefer to see addressed first.

Love the discussion on this and maybe I was misunderstanding what this would be - from the title here ‘Ability to…’ I was understanding it could be optionally used on a problematic run or trace, and not an automatic step that would occur on all runs imported to CS. For instance even with the maps I showed above I would ‘clean’ my trace for maybe ~5% of those runs, mainly the ones that drifted into the river or made me miss nodes, etc.

Yeah, that was my intention. Kind of a “if you really feel like you need to edit this activity, ok, you can manually adjust the traced path & also have this ‘auto-snap’ at your disposal” approach.

Overall, I’m not seeing a lot of interest in this idea - it might be because a limited amount of people are affected by bad GPS, though. The conversation has been really helpful so far, though - thanks everyone!

It also caused me to try loading an ~11 mi .gpx into runkeeper to mess around with the ‘snap to street’ function, but couldn’t get it to work well, the page kept crashing and the lines appeared to go everywhere when it didn’t. Does anyone else use this/does it work well?

Have just one badly traced run, so just thinking of re-running it

Yes runkeeper functionallity, it used to be a real saver for squiggly gpx traces. Nowadays i use another tool when i need it occasionally. For instance that first run in 2021 where garmin messed up

For me, I don’t need the auto snapping option. However, it would be very useful to be able to make small edits to runs to fix obvious errors on my lifemap. This could be either trimming off the start or end of a run, or removing a few bad data points from a run.

For example, sometimes on a run I get a random gps point or two some distance away from where I am running, and then then it returns to the correct location. Just like the run that goes out into the water in Kevin’s picture above. The rest of the run is fine but there is an annoying mistake on my lifemap.

If you have Garmin you can trim the start or end of an activty on Garmin Connect, and same in Strava. The problem is when it occurs in the middle of a run, as that lap in the Charles River did! No way to excise an error and stitch the two parts together, at least not without more advanced gpx editing tools.

But if you trim the activity, and it has already been processed in CS, will it be re-calculated to reflect the change?

But if you trim the activity, and it has already been processed in CS, will it be re-calculated to reflect the change?

Only if you delete it in CityStrides and then re-sync it.

Here’s today’s quintessential wish-I-could-clean-this-trace-up, a trail in a distant and very hilly part of the forest park where the GPS was noisy and way off. Will need to re-run this trail 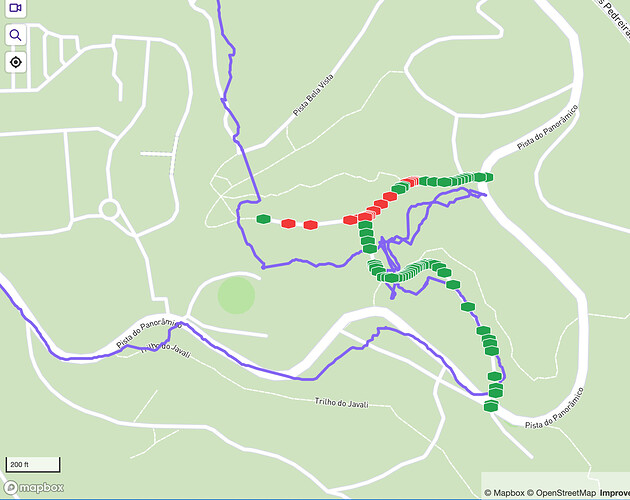 Just a heads-up, there seems to be a repeat of the early Jan tracking issues with some devices: Tech Tidbits: Garmin GPS Offsets Again and PowerTap Units Discontinued | DC Rainmaker. I had two that were basically unrecognisable this week