A lot of the discussion here is focussed on technical aspects, but I’m really curious how people go about the running part! Are you looking to complete 100% city coverage? Do you run nodes or streets? Do you have a systematic approach or just freestyling?

I am hoping to achieve 100% ‘runnable’ streets in Diemen. In Amsterdam I just try to get higher and higher. 100% is still far off…
I usually plan my routes using the lifemap/nodehunter and plotaroute, aiming for red nodes first. If I run through an area that I have already covered I tend to aim for really running all streets.

I’am trying to walk all the streets of Lyon in France. But the city disepread from the citysitrdes data base as all the Auvergne Rhone Alpes region. i was about 20% of the city. I’m printing a map of a district every day I know I will walk. with the walks I already did on city strides.
And I do some squares or I walk strit for 15 min.
I hope I am progressing on my project, I will see it the day Lyon will be back in city strides.

I try to run/walk all of the streets and trails - not just the nodes. I plan runs using the lifemap and Mapmyrun (for distances), now working on several cities at a time. I am also trying to run my state north to south and east to west on the lifemap. That is a lot harder than I expected.

i print out a section of the citystrides map and run the streets that i havent run before. very motivating and fun!

I actually had 3 cities at 100% before the big update.
Third city will probably require about three runs to get back to 100%.
Fourth city is at 38% and will probably take me a year to finish

I also try to run trails/paths that are not in citystrides, cause i don’t like empty spaces on my map.

Check out my map citystrides.com/users/2645/map

I usually plan my runs on my pc on gpsies.com and navigate from their app on my phone.

so the beta version of your LifeMap (more info) is quite faster: https://citystrides.com/users/2645/map_beta

I am running for 2 years now with citystrides and covered 6 surrounding towns/cities. 2 more are almost finished. The total coverage would be around the streetcount of Amsterdam.

Since the update i started running ’ loose ends’ runs to get the stray nodes here and there. I like that all the manual completions are gone now, i had quite a few for non street features. although i have a handfull back of those, since the OSM data is not correct.

Even yesterday evening i went for a stray node that was no street at all! a big mud wall was separating me there from a grassy path. (they just finishing the construction of a new road there) So a scrambled over the mud wall and ran along my planned course. If the nodes are irl not doable, i now manually complete them and adjust OSM accordingly. In time my manually adjust nodes will be deleted when a OSM update comes into citystrides.

For completing a city, i always plan beforehand in strava routes, combined with the lifemap. I run with my mobile in my hand to not skip any node, siwthcing between lifemap nodehunter mode and strava. I so got used to that way of running. I now have more 2 runs planned for 100% of city 7 and then 8 or so runs for city 8.

Will there be a life after this? The streets are slowly getting further and further away from home or work. I need to plan for a new house somewhere away from here i guess.

Thought the beta map only worked for me when logged in.
So your saying i can link to beta map for others to view?

@hjkiddk :That last is quite off topic. please search the forum first, there are better topics to reply and ask for lifemap beta questions. (I hope you get what i try to achieve, keep the threads on focus and on topic)

James started going off topic, and now you choose to go even more off topic

Would probably have been easier to let it go or perhaps have sent me a private message.

Thanks for sharing, some impressive running going on here!

I only joined CS in September but was pleasantly surprised to find that I had covered a good proportion of the streets in a 5-6 km radius from my house just by switching up routes out of boredom. I’m now using my regular runs to track down any nodes/streets I missed. If I have time I start my long run somewhere in virgin territory and start methodically filling in all the streets (it looks prettier than just nodes, and I don’t want to have to go back to fill in any I’ve missed 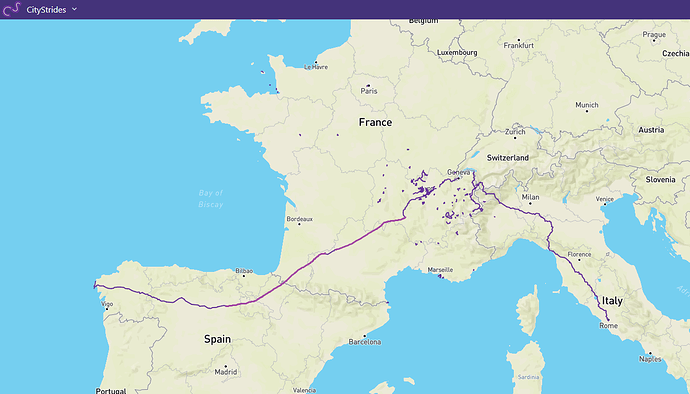 I’m trying to cross Europe, I love this map !
Going back to Italy next May

I was able to hit 100% in my fairly small suburb before the update, and now back down to 96% until I get them knocked out. I work downtown Kansas City and do most of my midweek runs there, so have been trying to take smaller sections and plan my routes using the RunGo app (is nice because it will give turn by turn directions from my phone as I am running). I also go by streets and not nodes but use node hunter to locate any missed areas or areas that may need to be cleaned up in OpenStreets.

do you think we’ll have to redo all the streets after the update? my region desepeared during the update… I had done 20% of Lyon…

I am sure soon you’re 20% wil be back. James is crunching the numbers for all members through the 2.0 update of loading OSM in another way into citystrides.

The node hunter has been a game changer for getting closer to 100%…Seattle has a number of street-alleyway hybrids, streets disguised as driveways, etc. It’s now really easy to check which of these need to be run (or attempted at least). As I get closer to 100% it will soon become necessary to go back and revisit to clean up missing nodes. And there are still some streets where > 10% of nodes are unreachable (usually a dead end with 2-3 nodes where the end one is in someone’s yard).

In an ideal world I would hit 100% of streets and 100% of nodes but there is still work to be done to clean up the openstreetmap data. With the new dataset one can probably get to 98% or so, much better than the original data.

As one of the original users I can say that I never imagined how much this community would grow and the idea that we would have an entirely new dataset seemed crazy 5 years ago. So I’m now convinced that we will eventually have near-perfect data

Made my first town!!!
100% of Altoetting explored by running.
Yes