This is potentially just a GPS issue but I can’t seem to get an answer on that front either. Run today, you can see from this screenshot my intended route was to capture the nodes, but the GPS trace of it is off which means none of them are completed, despite me clearly running down those streets. 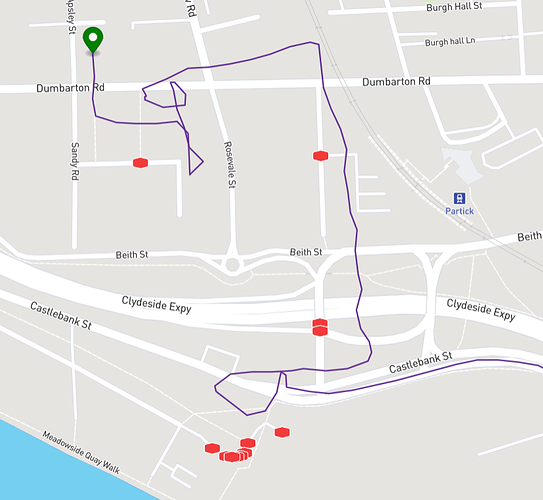 Is this something to do with how the coordinates are brought into CS or is it a Garmin issue?

No worries - I moved it to a new thread, since it’s a different topic.

What’s the map look like in Garmin? Is it the same wild tracking?

Ah, of course good point. Yes it’s the same wonky tracking. So I guess the issue is the GPS somewhere along the line. Weirdly the second half of my run tracked perfectly, including a few tiny streets that it logged without an issue.

I’m also interested in the answer, as I had tried futzing with my GPS settings on my watch. Seemed that the weather could affect it. I also had cleaner GPS traces when using my phone than when using my watch, but I’m not going to go back to phone tracking just because of that.

Interestingly I also saw that certain areas had more ‘GPS interference’, such as Kendall/MIT in Cambridge (see fuzzier lines near the bottom in the below photo) 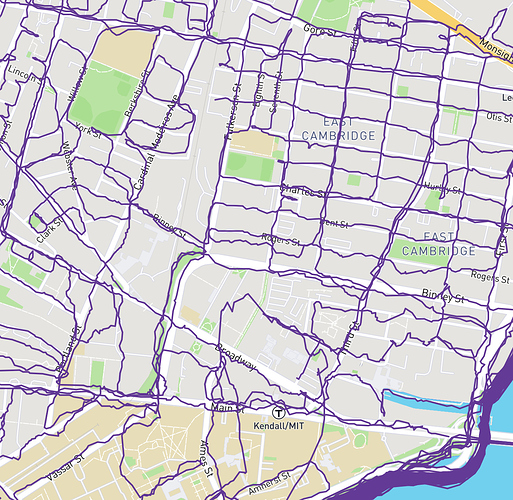 I’ve had similar issues, and waiting a couple of minutes after getting the GPS ready signal seems to help a bit. The idea is that the watch can localize additional satellites beyond the bare minimum (this would also explain why the latter part of your run is tracking fine). Unfortunately, I haven’t found anything to improve tracking in built-up areas with narrow streets, it’s my main reason to keep routing my runs through runkeeper rather than from garmin directly.

What’s this about ‘routing thru runkeeper’ (since I’ve never used it) - does it, like, clean up your GPS route and put it in nice straight lines without the noise or something? Asking because I’ve noticed some peoples’ Lifemaps are VERY neat and orderly compared to mine and I’m always wondering what the secret is. Even my best GPS tracking days have some noise and drift.

Yeah I’d like to know about that too! It would be great to find a way to snap my runs to actual roads, since I rarely actually run through the middle of buildings!

How to Edit an Activity Map

To edit an activity map, head to runkeeper.com, sign into your Runkeeper account, then click on the Me Tab in the upper navigation bar. Then in the submenu, select Activities, then navigate to the ...

I’m guessing it’s maybe utilising the ‘snap to roads’ feature noted here? How does that then sync to City Strides correctly?

It’s very easy to edit the trace in runkeeper, so if the watch has me doing mad rooftop ninja stuff I edit it to bring it back to the route I actually took. It’s mostly necessary in built up areas, if it’s just 1-2 storey buildings the trace is fine as is

Personally, I’d prefer that other people think I’m doing ninja rooftop stuff. At my age, anything super-human is appreciated.

I was getting really frustrated by really inaccurate GPS route tracking on both my iPhone and my Apple Watch. In the end I got so fed up I invested in a second hand Garmin Forerunner 235 and it’s made a huge difference. Previously I’d be missing nodes all over the place. Now even on overcast days when the tracking isn’t as precise as a clear day it’s still accurate enough for me to catch all of the nodes I need.

It will take me years to complete my city doing it this way, having to repeat random sections because of GPS drift is god-level difficulty way beyond my mileage

@itsafrogslife I noticed a big improvement going from phone (android) to FR245 as well. Still not perfect, sadly

Wish I could say my traces have been better on my Fenix5, but they really haven’t unfortunately. Here’s a representative comparison of two very similar activities, one recorded on mapmyrun on and the other on Garmin. Minimal drift with phone tracking, but with the Garmin it’s all over the place often showing me in the water or on the expressway, and this isn’t even one of the worst traces (I pruned the really egregious ones from my lifemap entirely)

I’ll also note that I already changed my settings to every second tracking and GPS+GLONASS following advice provided here, which may help others: Improving GPS Accuracy, Distance and Speed Readings on a Instinct Watch | Garmin Support

Interesting mix of views here. I am using a Garmin Forerunner and I have to say most of the time it is fairly accurate although at random points it just goes all over the place. Being able to snap it to roads would be really good but I don’t think that exists in Garmin.

Thanks for the suggestion of waiting a few minutes before starting - that could be it, plus I live in an area with quite high flats so perhaps it just doesn’t start tracking effectively to begin with.

If I’ve run a street but the dodgy GPS caused me to miss a node I’ll either look to see if I’m going to be round that way again so I can catch it at a later date, or if not then I’ll mark it as manually complete. With over 5,600 streets in Liverpool I can’t really be too picky about it!

I’ve found a few things can still affect the accuracy of the GPS trace on my Garmin Forerunner 235.

Ooh, hello! I’m another (occasional) Glasgow runner in Citystrides. Have you noticed how many roads with nodes are actually dual carriageways and not accessible to runners? At some point I plan to get more active in the Open Streetmap community and start to add my own edits (with the purpose of improving the data that underlies the Citystrides functionality…

On a different point, I was wondering if people had any thoughts on the following idea as a way to ‘fix’ run traces with really poor gps/satellite navigation issues.

One of the big problems I encounter in very built up areas (parts of London like Canary Wharf and The City, or in Glasgow around the city centre and in some of ther narrower lanes) is that the ‘gps trace’ as recorded by my Strava app (phone or watch version) is really inaccurate. I know which streets I followed, by my map trace can sometimes be acompletely different. Some nodes are nigh on impossible to catch.

So, in the Strava ‘route planning’ feature, I can replicate the route I actually ran, save that as a .gpx file, download it to my computer and then re-upload to Strava… for the purpose of importing into Citystrides and replacing the wonky recording.

Pros: more accurately reflects the run. Easier to see which streets/nodes remain in built up areas.

Cons: A lot of work. Feels a bit ‘fake’ (even if the intention is to improve accuracy). Might get accused of faking things by others.

Any other thoughts on this idea?

I feel like this is something that I should accomplish in the code (in other words, do this for you) … I know it’s possible to “snap” tracing to streets …

I might be able to rework the progress detection code to figure out if you’ve run along a section of street / along the path of some nodes (rather than what I’m doing now, matching directly node-to-gps-point)

I’m encountering the problem of running along one side of a duel carriageway and not hitting the nodes down the other side. I’m having to either return to run sections of a street again, or mark it as manually completed. Is there any way round this? I know I can sometimes run down the central reservation, but it’s not always the best running under foot! 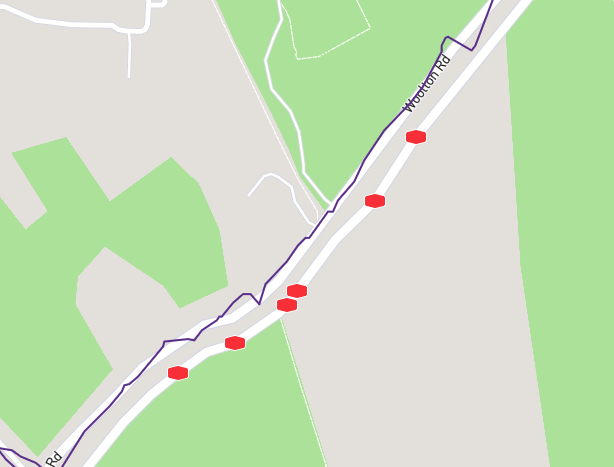