When there are nodes for both directions of a divided road 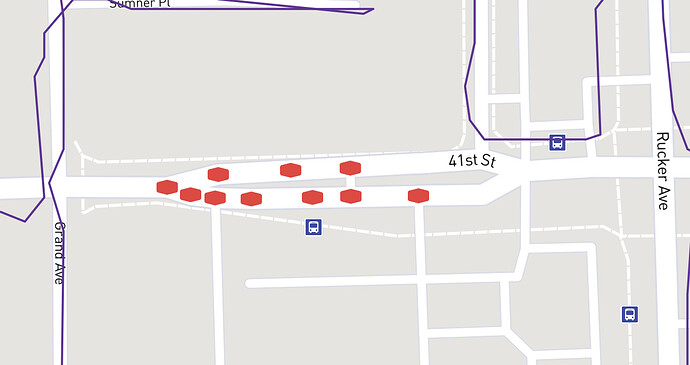 It’s your choice, CS ill check to nodes to green if you are close enough. something around 20 meters. Your example is one street for me, i wouldn’t double it. It’s just seperate drivelanes of one street.

I try to always run against traffic especially in cities, so personally I would just loop around. But run down the median if you want to eat the nodes most efficiently

I used to run down the median in these situations, but after going a few km with trucks rushing past at 60km/h only for GPS drift to put my track firmly on one side of the road I stopped bothering

. If it’s just a road with a small median I consider it done if I’ve run one side, if there’s a park or significant space between the lanes I’ll run both sides.
For collecting streets it’s enough to get 90% of nodes, so you could probably grab the one in your example by just running the nodier side

For me, I have done both methods above, run both sides, towards oncoming traffic and walked medians (they are usually overgrown, and I don’t trust running where I can’t see).

One thing I didn’t see mentioned, is you only need 90% of the nodes to “complete” the street. depending how many total nodes are on 42st St, running one side of that median may be enough.

But I have seen many people who want “all the nodes to be green”, and lines on every street of the life map. In fact, that is my goal too.