What is your most run street name?

Struck me that as I run in different cities around Portugal, and especially smaller villages, there is almost always a “Rua da Escola” or a “Rua da Igreja”. So I went to the Completed Streets tab of the right-hand side drop-down menu Sign In - CityStrides to take some guesses at the street name I’ve run the most unique times. As far as I can tell it is indeed Rua da Escola (School Road) at 13 times, whereas Rua da Igreja (Church Road) only pops up 10x. Rua da Fonte (Fountain Road) is at 12x, with an additional 6x for Rua da Fonte Velha (Old Fountain Road)! I also thought of Portuguese Independence Day, the 25th of April, which came up with Rua 25 de Abril 7x and Avenida 25 de Abril 5x. Some other ones I looked up clocked in the 10-12x range, but nothing I could think of beat Rua da Escola so far.

If I ran more in USA maybe it’d be Washington Street (3x) or Main Street (3x). Perhaps in your country it’s something different based on a historical event, common building, or geographical feature. If you’re curious like I was, go to your Streets page and do some research, and share it here

Even though I have run in 143 cities, they are in 21 countries, with different languages, so it’s more difficult to get the same names. In Sweden I’ve run 25 cities, and could only find one street name that has four occurrences, Hamngatan, which could be translated to Harbour or Port Street.
My guess is that the most common in Sweden would be Storgatan (”Main St”), so maybe I’ll try to catch these when I hit a new city😁

Sorry to immediately derail the conversation

The upper section of the top right menu should still include a “Completed Streets” link, does yours not? 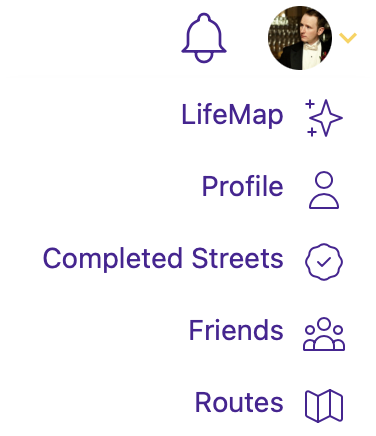 Oh yes there it is…I’ll edit to not spread misinfo! Somehow was blind to me and I got there the hard way by editing the URL and guessing lol

Fun topic! I have run “Main Street” [5x]. If we allow “variants” (e.g. Washington Street and Washington Avenue), then my record looks to be “Belmont xxxxxx” [10x], including Streets, Circles, Squares, Places, Court and Terrace.

Agree, fun topic. For me, Lincoln (21x) and Washington (13x) are the ones I notice the most. Every town here on Long Island, NY has one. Sometimes more.

I run primarily in Georgia & found my most common completed street name is some variation of ‘Peachtree’ with 32 so far across 7 cities with Atlanta having the most!

Fun Fact: The AJC Peachtree Road Race is the world’s largest 10k race & is held on July 4th every year in Atlanta with 60,000 runners!

Hmm, I see my list, but how does one “group by name order by count(*)” the results? Sorry, I’m a SQL programmer.

Do East/West and North/South variants count as the same street?

I have ~2100 streets, but the idea of paging through 176 times, looking for the same name, seems rather tedious. Is there an easier way?

Is there any way to extract them from CS to anything useful like csv?