View "marked as complete"-streets and ability to unmark them

I’ve marked streets as completed before fully understanding how CityStrides work. It would be nice to be able to view these streets, allow me to unmark them and make them incomplete again.

I second that, and i would like to unmark also when i have it marken manually before, but later if do run it, i would have it registered on marked with run x, and not still ‘manually completed’.

Can you share a link to a street that you’ve manually completed @petje / @aa28 ?

This is one I have manually completed, but since have reached 92% on:

You can open up “Completed Streets” in the top right menu or visit CityStrides while logged in.

I’ll leave this thread open for a bit, in case there are changes anyone would like in how I built it.

Good stuff, thanks! If I have understood correctly, 90% nodes completed should complete the street, right? I tried to unmark the one I linked above and now it’s listed as incomplete, at 92%. So that might be an issue?

It’s not a huge issue - I can just reprocess your entire account (unless you happen to know which streets were unmarked). I just feel like an idiot

… though you’d think I’d get used to this

Cool feature, i will do a lunch walk later today, where i will complete 2 nodes i have previously set to completed manually. It’s not private, and freely accessible. Good test for this.

Both should have this street marked as completed via the walk, correct? 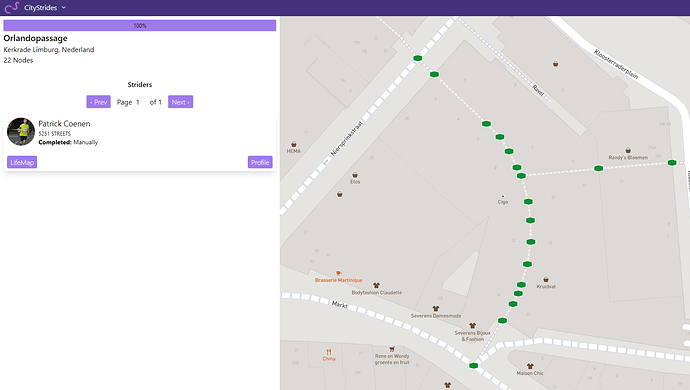 Is it possible to get this street to completed by run x? I cannot undo the manual completion as far is I see now.

ps: where is the ‘unmark’ button?

Yep, this is the same issue as for me. The unmark button is next to the streetname on the «manually» tab of the new completed streets page. However unmarking will just leave it incomplete.

You’ll have to first go to CityStrides and click the Manually tab. From there you can unmark the street as manually completed. When you do that, it’ll start a background job that will reprocess your account to find the new completion/progression data.

I will give it a go now. I walked the lunchwalk eand now whould have the last 2 nodes of the street actually completed. So unmark the manual;upload my lunchwalk and see if it gets to completed after the sync

edit: after going to completed streets and clicking manually completed. I filter on the actual street: homeruspassage. in the view screen of in the ‘go’-screen i don’t have a button to unmark the street. Am i missing something? 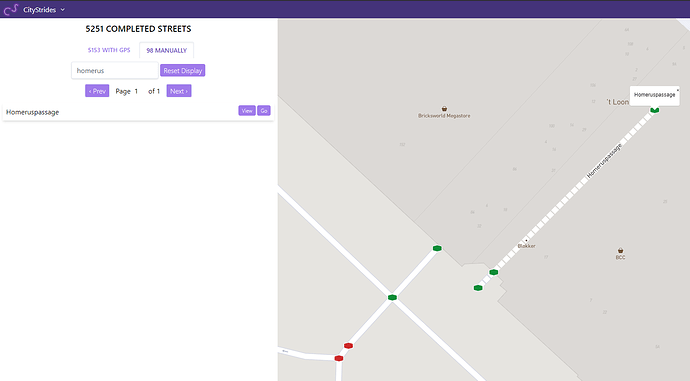 AAAAaaaaaaaaaaah, wait. The umark button is only there when not filtered!

Nope, if i try to reach the street i want to unmark, the unmark button disappears after the first page. @JamesChevalier: some prpogramming is needed to have the unmark buton in the screen when paging or filtering

Really like the new page with completed streets, Very nice

I have done a lot of editing in osm, marking unreachable parts of streets as private.
I then manually complete those streets i can’t finish without trespassing.

I’d lean towards the latter approach. Perhaps with some way to notify people that their manually completed streets were updated … or maybe just a blanket “hey, CityStrides street data was updated, go check your list”

Ow, then i need to do a lot of work. I had expected that the manually completed streets would vanish when the osm update would determine a private street or section. That would make sense to me, since the streets are unrunnable and are no streets in that sense. I should not have to undo a manual completion to get a non runnable street ‘runnable’ again?

If the change is that there’s an entire street in CityStrides that shouldn’t be here at all, then the update in OpenStreetMap will make it “invisible” to the query … This would result in the street being deleted from CityStrides. That should also automatically remove the manually completed street.

If the change is that a piece of the street is private, then the update in CityStrides will be that the street is just somehow changed (I won’t really have a view of what changed, how it changed, etc - I’ll only know “this is different now”). The exact same situation is going to occur when I finally get streets updated so that they don’t extend beyond city border - a piece of that street will go away.
So this “street update” scenario is where the two options come up.

There is also the idea: Remove 'manually completed' feature … so if that’s the goal then automatically unsetting manual completions on street updates seems reasonable. If completing streets manually is only a way around bad data, then if the data is fixed then it seems to stand that the manual completion should be removed.

lots to think about

So i unmarked a street. And a minute late i uploaded the track of this afternoon. The city completion was still 100% between those steps. I had an unfinished street again (of course) and the street is on completed. Nice!