Big update day for RI cities and I went through to look for new changes. Came across a street that says it’s been completed manually, although I’d tried to unmark all those some time ago. Doesn’t really make much difference, except I thought it was notable up against “hard mode”, where manually completed stuff shouldn’t exist. Further, and the reason I though James may want a look, is that the street in question (Division St Warwick RI Division Street - CityStrides) doesn’t show in the “completed streets” list. Possibly related, I thought it strange that only a few nodes out of a pretty long street showed when looking at the street? Didn’t find these exact conflicts in old threads, if it’s been resolved elsewhere I’d appreciate anyone’s help! 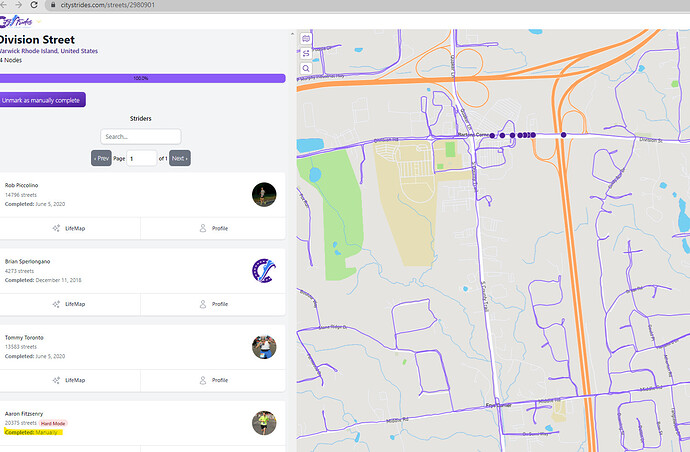 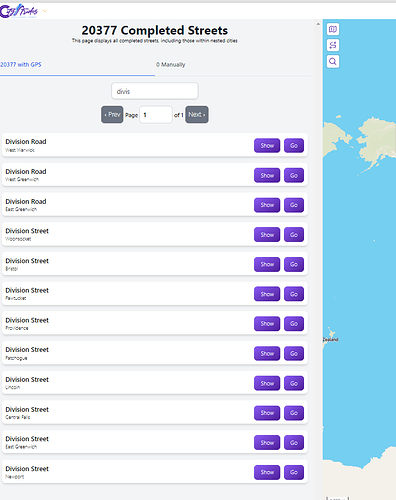 Adding here since it’s kind of related? With these updates some roads were updated with good intentions, but conflicts. Named service roads connecting multiple driveways were reclassified as driveways, removing them from the CS street count. Now though, I’ve over-completed some cities! FWIW, I kinda like the idea of an over-completion option for a place that has runner-friendly named track roads and such that aren’t truly streets, in line with the “adding trails” discussion. 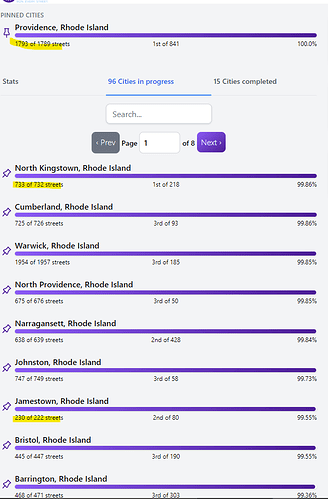 Semi related: After a city update, I’ve had a couple of streets not properly mark as completed. If I go to the street page, it shows as 100% nodes completed (I’ve enabled hard mode) but shows as incomplete on my city list. In these cases, I’ve waited at least 24 hours after city update to allow time for any slow re-processing. Then I’ll go to the activity page that should have marked that street as complete. Delete that activity from citystrides and wait until I get confirmation notification that it has been deleted. This may take some time as the deletion is pretty slow. Lastly I’ll select to sync that individual activity from Garmin (Settings > Activity Trackers). This single activity re-sync is pretty fast usually. This has always then correctly marked that street as completed. May be worth trying for Division St.

Good input! The situation here is not that the street isn’t reading as completed (I re-ran it to complete a stray node, went back and tried to “unmark” the manual complete). I still get the completed street in one screen, but it doesn’t exist in the second screen.

Just recommending as a backup option. The re-process may correct that issue. It’s possible some of the various processes are timing out and thus weirdness in UI.