Streets and Cities not updating

I joined yesterday. Imported my activities from Strava and after a couple of hours the activity total stopped increasing so assume the sync finished, but none of my towns/cities here in Australia mark as having been run and none of the streets either. Even though my lifemap looks correct and complete. Any ideas?

Australia is not thoroughly mapped in OpenStreetMap… it’s possible that your cities aren’t in CityStrides: Australia - CityStrides

My area is very thoroughly mapped. I am an active contributor

How can I assist adding to CityStrides?

It’s really all about whether or not cities exist as relations within OpenStreetMap. In many cases across Australia, the cities only exist as nodes. If you search Nominatim for a city name, the result needs to include the text “Administrative” within its result.

In this example for Bathurst, you can see the second result is the usable source. In many cases, this entry doesn’t exist for the city. 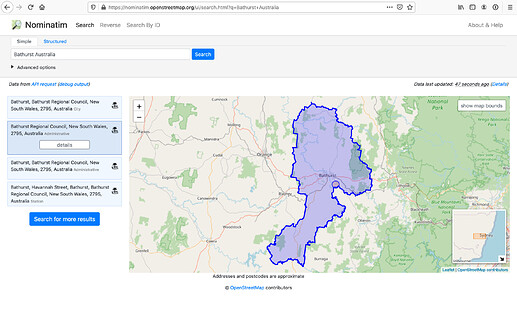 Which region of Australia are you in? Can you share some OSM links for cities that look like they can be imported? Maybe my initial import of a region was just looking at the wrong admin level…

They appear to meet your criteria, but not sure.

Yeah, these are all valid. The key pieces are boundary = administrative and admin_level = # … The admin_level is the weird one, because its value can vary. In many countries/regions, all cities exist at admin_level 8 … in others, cities can be all over the place. It looks like 6 & 10 are common levels for Australia.

Logan City is at 6 (same level as Gold Coast), and doesn’t seem quite as large as Gold Coast. Then Tamborine Mountain is 10 - same as Tweed Heads, but it seems a bit larger.

I’m trying to understand whether or not everything at admin levels 6 & 10 are going to be valid cities. That would help me bulk import…

Level 10 are predominantly towns and some suburbs. This would give Queensland and indeed Australia good coverage if they were imported. The states all seem consistent.

Apologies, I can’t tell from your message if you think it’s best to import level 6, level 10, or both.

No, I do not. I think import level 6 only. Level 10 areas in country Queensland will be very large.

The admin level 10 places seem much smaller, like Svensson Heights

Sorry! Was out having breakfast when I replied.

Level 10 should import not 6

If there are any individual places in admin level 6 that are worth of importing as a city, I can do that…

But yeah this is going to help out a lot! 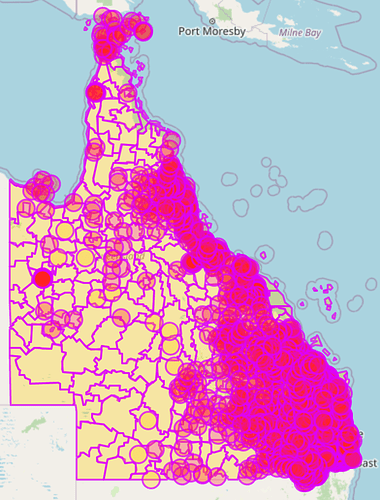 Brisbane City is the State Capital of Queensland. I think that already exists as a city in CS though.

Logan City is not a city. It is a local government area

Ipswich City IS a city. Not sure why this is a 6, but definitely worth importing as a city. (Edit: No, again Ipswich City as a level 6 is correct. There are suburbs at level 10 including Ipswich representing the city centre), so do not import)

Townsville City is a local government region. There is a city called Townsville, so I expect there is a Level 10 Townsville too

The remainder as not cities.

Sounds good…
Australia is already filling up in CityStrides. It could take some time, though.

There’s a whole thing about how OpenStreetmap figures out administrative levels. It can be common to have most cities in a region exist in one admin level and then have one other city at another level.

I’m going to let this admin level 10 import finish first, then I’d be happy to add some individual admin level 6 places - maybe later in the week.

Thanks for your help on this.

Thankyou so much James. A lot of us Aussies will be very happy ‘gamifiying’ our running… even more.

A final question. Will existing runs automatically process to streets and cities or do they need re-importing?

A lot of us Aussies will be very happy ‘gamifiying’ our running… even more.

Thanks again for your help - I’m really psyched to get Australia properly added to CityStrides. It’s been on my list for a long time.

Will existing runs automatically process to streets and cities or do they need re-importing?

Everything will happen automatically - no need to do anything other than wait. Which is pain enough, really.

There’s a whole system of background jobs that create data & match the new nodes with all the existing activities & calculate progress in a way that properly attributes things (if you finished a street in, say, August of 2010 and you also ran it last week - even though I’m adding the city today, the activity from 2010 will still be the one that marks as completing it).

Alright, all the cities are added … the borders are being generated now, so some cities might not have a border yet - could take some hours for that to finish.

It’s been a while since I’ve bulk-added cities like this, so let me know if progress calculations don’t look right or if anything else looks wrong/missing.

Ok. Nothing changed to my cities progress yet and no new cities appearing in my profile. Will give it a couple of days.

If I go to the global city search I can find cities that weren’t there before.