I’m going through my incomplete streets (so many surprises in that list!), I found an example where a street shows no red nodes, shows 100%, but has a Mark as manually complete button. It isn’t complete? What to do? 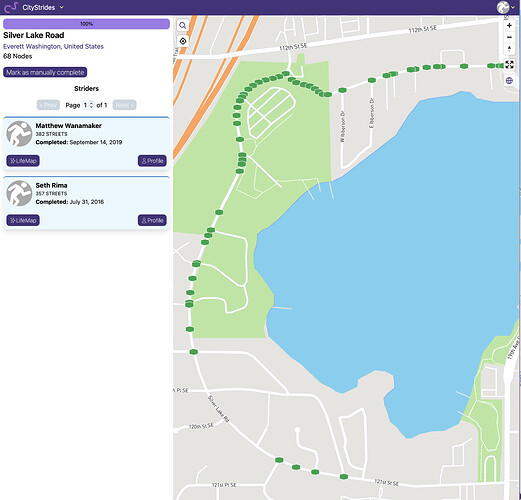 Hi!
Have there been changes of these roads in OSM? I have the same issue, just the other way round. Incomplete streets are in the complete list. That is because I marked parts of these roads as accessible. When my city was updated, the nodes and streets were correctly updated, but they were not moved to the incomplete list. Maybe you (or someone else) have deleted some parts of the road/marked inaccessible/private? If that is the case, the roads should be put in the correct list with the next update from OSM.

I have the same issue but weirdly the street is completed in the parent city just not in the nested city.

To note though, there have been no OSM changes to the street and the parent city has been updated more recently.

I don’t know anything about nested cities unfortunately. I haven’t edited any streets in these areas, I don’t know if others have.

I finished today, and I have four incomplete streets all showing 100%. Is it a clue that the city shows 99.51%?

Here’s my profile for this city…

There was an issue in the code used for the previous updates that sometimes caused this issue. On the street page you can see the number of nodes mentioned does not match the nodes shown in the graph. James thinks he has fixed the issue, but for that all cities need to be updated again. This seems to be slower than before, so we are all eagerly awaiting the update of our favourite city.

For now, you can manually complete the city. Once the update corrects everything and CS calculates you have really completed it, the flag will be cleared.

This shouldn’t affect your total completion, but maybe the completed streets with some uncompleted nodes are messing with the numbers? (E.g. Pine Street or 39th Street)? Just speculating here…

Thanks Inqu, Pine Street was incomplete? I see that now, but why does this street show as complete if if has incomplete nodes? Grumpy face.

It is frustrating to rely on this site to help us know if we’re complete or not, only to have it be unreliable. I’m off to find these incomplete nodes!

why does this street show as complete if if has incomplete nodes?

They count as completed, when you reach 90 % of the nodes (About the Node, Street, and City Data)

17 posts were merged into an existing topic: Many completed streets say incomplete