Street has two names in CS, not in OSM 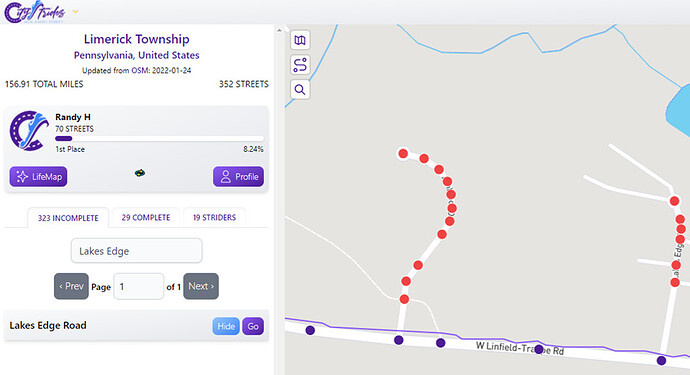 image975×531 73.5 KB
[yes, I am absolutely certain that I clicked Hide on Ashbrook Drive before this step]

I’m an OSM newbie, but I at least tried to look for something to explain this. As a guess, perhaps Ashbrook was at one time mis-identified as Lakes Edge in OSM, CityStrides brought that over, OSM was subsequently updated, and CityStrides now thinks that way has both the old and the revised names (??). What would purge the CS database of a previous name?

here’s the OSM map for this little area: OpenStreetMap

Check out this thread. It’s something to do with how CS is pulling in the data from OSM. I’m not sure if James has had a chance to look into this recently.

All of these bad nodes were created in 2019. These way records were updated in OSM since then, so maybe those updates corrected the issue & the city update process didn’t pick it up for some reason.

@JamesChevalier I have given you a couple of examples in the other thread Street with two names after update. Can you fix those as wrll?