A city I am running just updated a few days ago and in the update some weird things happened. Some are the all green but says incomplete, which I have read about a lot, but one things that happened that I can’t figure out or find something exactly the same is this:

There is a street I had previously run called Whippoorwill Lane, that is now showing as incomplete zero nodes in the middle of the Atlantic. When that happened to me in the past it was for a street that was unknown to me and eventually sorted itself out. In this case Whippooorwill is still on the map (see photo below) and in OSM it seems right. There was an OSM change as I fixed the road to indicate what was street and which were driveways, so it did update.

In summary, the street still exists on the map in OSM and is listed as an incomplete street, but if you click on show nothing appears and if you click on go, it is that 0’0" coordinate view of nothing. 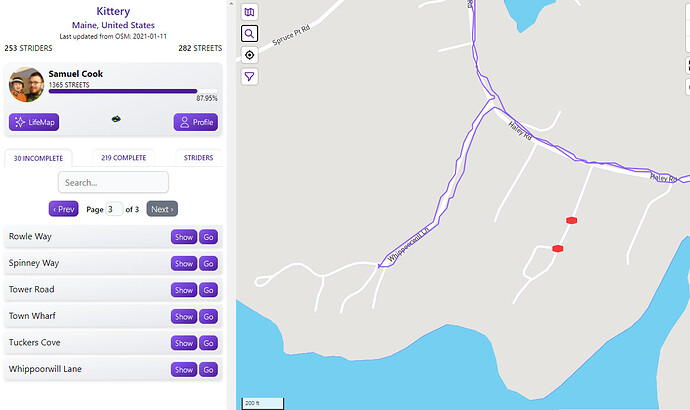 Putting this here as this was the first topic that’s similar to what I found.

Found a “off the coast of Africa” street. Base Station Road in Thompson and Meserve’s Purchase New Hampshire

Base Station Road in Thompson and Meserve's Purchase, New Hampshire -...

and also Base Station Road in Sargent’s Purchase, NH

I can’t remember if that’s something you have to fix or I have to go into OSM and fix.

There’s a big thread about zero node streets here: Street has zero nodes where I thought I fixed all this.

I notice that one of the streets reported by @Jason is in a city also updated on February 15th. I’m going to poke around in that code again - I have the idea that forced early exits are causing trouble (I use these during deploys, so I don’t have to wait for the full city update to finish – some can take 12+ hours).

My issue is now correct. Whipperpool Lane came back on the 2/15 update. It was odd that it showed as having lots of nodes, but then did not actually exist in the database, but now it is back!

I don’t think anything is wrong with how the code handles system shutdowns, because it immediately re-queues the city for another update (so it wouldn’t be wrong/broken for very long).
What’s still confusing me is why the system deleted nodes for these streets. There don’t appear to be wholesale “node rewrite” changes in OpenStreetMap.

Either I am not understanding the issue for this Base Station Road or I just happened to look at it after it’s automatic update. Let me know if anything is still wrong with that street.

It’s fixed now, so must have been the update. It passes thru 3 towns and it was fixed in the first two I pointed out on March 16. Then I discovered the 3rd town on March 20th had the same problem as the first two. It must have updated immediately after I posted about it. Sorry about that. Thanks for the fix. Now I can add road walks into my summer hikes to get that street.