There is a street in the current town I am running - Andover, MA - that is private property with trespassing signs and a gate blocking it. It belongs to a manufacturing company. Can it be removed from citystrides maps so I can complete this town? The name of the street is: Executive Place, and part of Burtt Rd is including in it. Attached is a photo of the area - the red nodes are in the private property area. 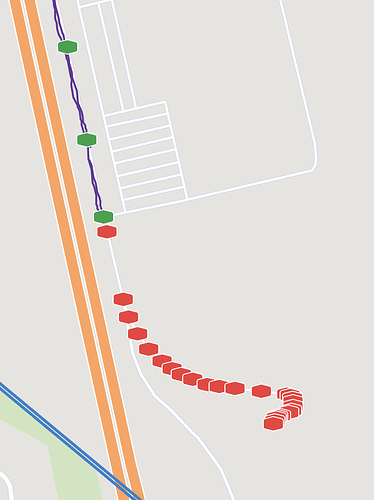 The street and node information in CityStrides is taken directly from the information in OpenStreetMap (OSM). Anyone can edit OSM by going to OpenStreetMap.org and creating an account. There is an update process that runs about monthly updating the nodes and streets here based on any changes found in OSM. However, the process is in beta, so it’s not perfect. Yet. (Don’t get confused about the pictures of a map on this site. That’s derived from a different website that also uses OSM as its source. This means that the nodes might not be on the drawn streets since both sites use different update cycles.)

However, I need to warn you that editing OSM is addicting. I started off by editing all the road errors in my city. I was making an edit a week on average. But then I started making other changes. I’m now adding businesses, churches, and civic buildings. I’m deleting buildings that have burned down. I’m now making at least one edit a day.

If you do start editing OSM, just realize that your edits affect far more than just CS. OSM (since it’s available to anyone for free) is used as the underlying map for a lot of sites and services. So if you fix the map on OSM, you’re fixing it for everyone.

Hi Margot, if you want to go ahead and fix the issue yourself please have a look here, it should have all the instructions you need. Good luck!