Should I fix this park? area=pedestrian?

This “street” is actually a small park. If you check it out in OpenStreetMap, the only thing I can see that might be wrong is the tag highway = pedestrian, which I think should be area:highway = pedestrian. Edit: after looking at examples, I don’t think that’s true anymore:

Specifically, it [area:highway] is not the same as highway=pedestrian + area=yes, which represents a non-linear area, such as a square or plaza, where multi-directional travel is possible.

Judging by the examples on Tag:highway=pedestrian - OpenStreetMap Wiki, perhaps on the other hand this is a valid “street”, and should be included?

Does anyone know if that would fix (and remove) the park area from CityStrides?

For the record I used to love heatmapping buildings, but figured I’d contribute to high quality data.

This type of tagging seems to have become common for similar place here in the Belgian OSM community, so I think this is tagged correctly on the OSM side.

As for citystrides, they are always a bit annoying to run since running the edges is… weird. On the other hand, it is a runnable area, so maybe there is a way to make them be in CS, but not have it be the nodes at the very edge. Perhaps a path down the middle or some such? Would have to be generated on the CS side though, so might not be worth the effort.

I can’t speak to how it should be handled in OSM, and Ward has some good points from his experience.

I think I should update the query to not accept areas as streets, though.

It’s hard to say. From the OSM docs they make it sound like any large courtyard, or linear, pedestrianized streets could be tagged area. I am tempted to say they should be valid CityStrides entries, as Ward suggested. This one could probably be removed since it’s more like a park, but I don’t think blanket banning areas would be safe?

Nice catch on “linear, pedestrianized streets could be tagged area”. I’ll hold off on blocking area.
The problem now is that I cannot do one-off removals, so we’ll need to either find some consistent tagging to block on or edit the way to adhere to an existing blocked tag (while being safe not to incorrectly tag OSM for CityStrides purposes).

I’m basically always in favor of not reducing runnable OSM designations from CityStrides. There’s a lot of largos/plazas/esplanades/parks that this would needlessly eliminate. So you have to run the edges of a pedestrian area sometimes, that’s fine!

Yeah, maybe just a solution is to highlight these objects as “areas” in Citystrides, instead of “streets” (or a label). Provided they are runnable, at least users will understand the data is accurate, and the fun is running the contour.

I don’t see any real problem… if I run all streets in a part of a city, and there is this kind of area in the middle of them, I see no reason to avoid it, I’m happy to run, and it makes my LifeMap look better!

I had my problems with pedestrian areas in the past, and i myself created one yesterday here locally. The probelm is that you don’t run a street, but you must catch all nodes making the area. That is sometimes really strange, running into a far corner or something. 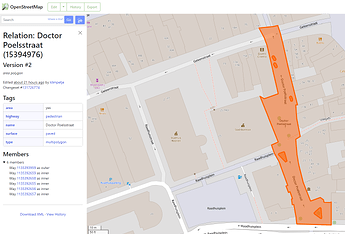 the above one is fairly runnable,
but for instance this one is aonther case: 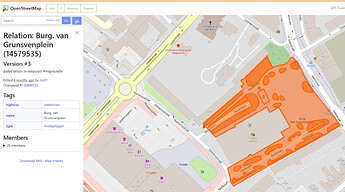 This is the only time I have no issues minmaxing a street and just hitting nodes. I run through the middle and only add detours to catch out-of-the way nodes rather than running the perimeter.