Roads without names, no nodes on hiking trails

Hi, been using and supporting CS for quite a while now, really nice gamification of running every street so thanks for that!

I’m close to ‘CS completing’ the city I currently live in but there’s a lot of roads that you can run, that have no name and therefor no nodes on them.
These are often specifically created for walking/hiking/running courses or paved agricultural roads heavily frequented by runners.
I wonder if there is any way to tag them to make them appear in the next OSM update for my city?

I’d rather not resort to giving them unofficial names and pollute OSM.

I have those also regularly in my cities i am doing/have done. I just run them anyway. Who knows if they get a name in the future. And it’s fun, a good experience getting to know the details of that city. And a line on the map can be run , also without nodes in CS!

Hi Patrick, yeah I am doing the same ‘as a runner’ but since I have spent a lot of time in OSM to fix roads/properties, I wondered if I could improve CS as well for my fellow runners out there.

Got some friends (in other areas) onboarded incl a subscription to see the nodes, yet so many of the active runner roads (often in nature, unpaved) are not counting towards their completion target and a few already stopped their subscription because of this.

True, improving OSM is another hobby i have, even before CS existed. After each run i modify the real life situation in OSM when i see it necessary. But one just can’t name a street/road/fieldway if it has no name.
The site exists because of “running every street in the city”. fieldways/agricultural roads just don’t fit that in the way this site is set up.

So for me the only thing is:

I agree with everything @petje says here. Part of the fun of running places that aren’t yet in CS because they don’t have a name is learning that it actually does have a name that other map sources weren’t aware of. In this way we make OSM the most accurate and increase its usefulness not just to CS, but to all other applications that use it as a backend. Plus, when CS incorporates the updates you will eventually get the credit for it

And if it doesn’t have a name, and never gets one? It’s still a cool purple line on your LifeMap that other, less adventurous striders in your area will noticeably lack!

Definitely, if they have no name, how could you put them in an alphabetic list…?

I’m gonna ssume every street has a unique ID in the database, since names can be duplicate in some cities.
In the list they could just be shown with their unique ID instead of a name, the name is just a label shown for that ID.

With the OSM filter (somewhere on this forum) you can get the streets without a name ([!name] instead of [name]) and that way the nameless could be inventoried if they have the required properties.

I am interested in adding trails, but I do know that they’re much less accurate in OSM. This would probably increase the amount of support work I’d have to do…
(I think) I’d also want to keep that data separate from the existing street lists. This may not be too troublesome, though…

I am interested in adding trails, but I do know that they’re much less accurate in OSM. This would probably increase the amount of support work I’d have to do…
(I think) I’d also want to keep that data separate from the existing street lists. This may not be too troublesome, though…

Hiking trails indeed are one of the nameless kind that could get nodes added for runners.
We have a lot of agriculatural and paved forest roads that will only get names in a few years or decades when the first house is built alongside, till then it’s just “that road between A and B”.

Personally it doesn’t matter much since I just run everything as Patrick said, but I’ve heard the argument several times now from friends I hyped into getting a subscription to hunt nodes, only to discover their regular running area of several square kilometers, hardly has any.

I have often thought the same thing… What’s in a name? Is a name really required?

Perhaps “trails” could have a “find radius” great than 25m (if I’m remembering the number correctly)?

Actually I think that’s not correct, there is no unique ID for a street. In OSM the concept street does not exist. There are only ”ways” with different attributes and tags. And Name is one attribut. If more than one way in the same city has the same Name, CityStrides group them together as a Street. I have some examples where the same street name exists on two different streets in my neighbour city. CityStrides doesn’t understand this, and will consider them the same street, just in two locations. So if there is no name on all these ways that are of type trail or path, CS will not know how to join them, which ways should be connected to each other to make one trail, or two trails, or three?
@JamesChevalier correct me if I’m wrong? But of course all problems can be solved, I just want to point out it might be more complex than you first think…

If we want to get very specific, the only things that ‘exist’ in OSM are nodes, lines, and areas

When you start running just trails with Citystrides

And if it doesn’t have a name, and never gets one? It’s still a cool purple line on your LifeMap that other, less adventurous striders in your area will noticeably lack!

Can’t argue with this!

I think you are right. So adding trails that have no name will end up creating 1 ‘street’ consisting of all of the trails. I expect that striders that have run a certain trail (however that is defined) would like the satisfaction of seeing it completed in CS. To me that seems impossible with the current setup of OSM and CS.

Imported some of my long distance trail runs into CS today to see how it looks on map, didn’t gain many extra streets but the comparison is interesting 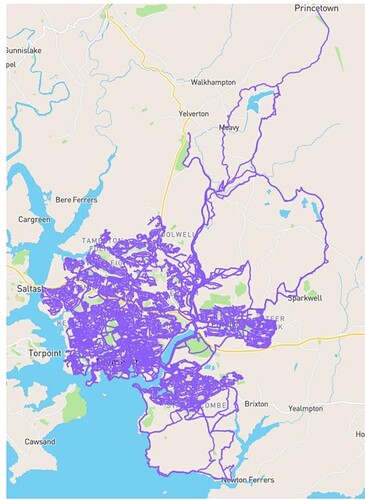