Really far to the closest nodes

Hey Everyone, right now I’ve finished basically every node within a 30 minute drive of my house. Is anyone else in a similar situation? What do you do now?

I’m struggling with Stockholm right now, 2400 done, 1900 left. But as I live in the easterly suburb Lidingö, at the black X in this picture, it will always be 30-40 minutes drive for the remaining parts. Will probably take me all of 2023. And apart from gas I also have to pay a ”congestion charge” everytime I go to the south part of Stockholm 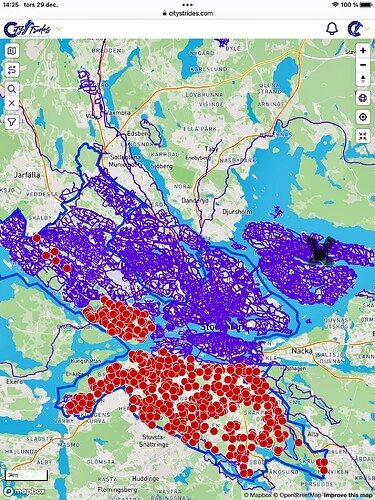 I’m not 30 min away but it won’t be all that long until I am. Because driving takes up a larger amount of time I just limit my mapping to a few times a week now. This is why I suggested some alternative functionality to CityStrides such as being able to run cities multiple times. It would be nice when I don’t want to drive far to just see what I need nearby for completing my hometown city again. I think James needs to find some interesting ways like this to keep things exciting because it really doesn’t take all that long to get the nearby stuff and sometimes its nice to just run out the door with a purpose vs driving somewhere.

I’m in the same spot now with runs that cover new streets requiring at least a 20 minute car trip each way or traveling that takes me someplace new. After 2 or so years of looking to complete streets/towns, it has become refreshing to just go back to my old local runs without having to do advance planning along with the time/expense of travel.

Vote for this idea, or add better suggestions for engaging in a city again:

Throw this nerdy idea out there. Obviously we can track our progress on the first run of a city…but how sweet would it be to see what we need to do for round 2?? Of course you could do this over and over again forever! I know you can filter by a date range to kind of fake this but if instead you could toggle a city to see what you need to run every street a 2nd time that could be fun. Round 2 could start right after you hit 100% (meaning you would have to rerun everything even if you ran it …

I think there’s something out there that would be engaging without having to drive for new streets. I’ve even thought of going so far as generating a random number (representing all the streets in the city) and then running that street (or a portion thereof) again.

Closest nodes are about 30min of running for me or 15min by bike. Why do you go by car to those streets? Citystrides is about sports, not about wasting gas!

Quite obvious🤣. The parts of Stockholm I run now is 15-20 km away from my home…. That would be very long runs without a car🙄

lol, what a silly comment in an attempt to shame others. Its obviously not feasible to run to roads 20-30 min drive away and also run new streets unless you are running marathon like distances to do so. You do you, the rest of us will do whatever we can do with our own levels of fitness and limited time!

I agree that completing Stockholm is a harder challenge than some other villages. Splitting it into districts or providing another badge for those extraordinary achivements

I drive 20-30 min pretty much every time I do a CityStrides run! I find this totally normal! Lol!