Ranking by City not showing everyone

The new ranking by city is cool, except I was #1 in Brisbane, Australia but now it shows i’m number 2, however it doesn’t list #1?? 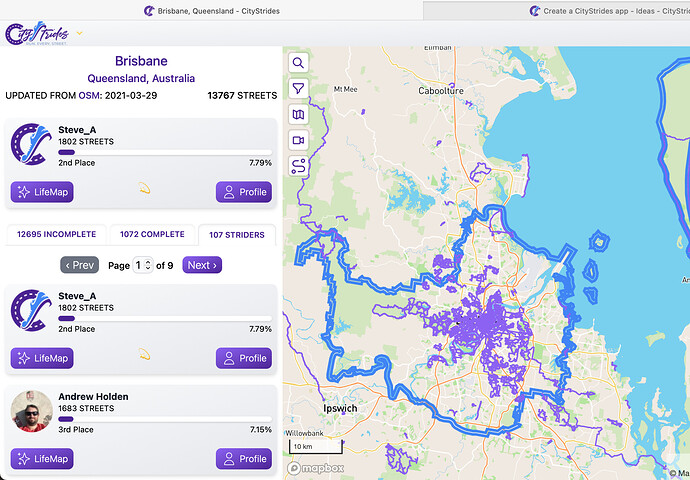 Man, I thought I was first in Springfield MA…now I see I’m in second place to a stealth runner, with no idea if I am 1% behind or they have already finished the city long ago.

@JamesChevalier would you consider adding a “lead runner is xx% complete” label for towns - perhaps under the ‘Updated from OSM’ line on the city page? It would seemingly be easier to do it for every town instead of programming it just for those towns with stealth runners in the top spot.

There’s a case to be made for showing all stealth striders in the rankings as having them listed doesn’t compromise their privacy (at least not more than the status quo). It’s always been possible to deduce their presence at city level (difference between total striders and those listed) and with the rank added it’s easy to get a good idea of progress as well. Why not make it transparent and create a level playing field?

I don’t see the use of scrolling past many placeholder user cards. I can’t display their profile information, so it would be

a list of empty blocks? I’m probably not seeing/understanding something…

These new rankings are certainly bringing up new and interesting conversations.

I think it would be interesting to show all stealth profiles as well on the leaderboard. No name or clickable profile, just the rank and % of streets completed, so other can target their score and what not. If not, then remove their rank completely I’d say.

Also I noticed, if 5 people have completed a city, the next person closest to completion will have 2nd rank, despite being number 6.

Also I noticed, if 5 people have completed a city, the next person closest to completion will have 2nd rank, despite being number 6.

Yeah, I built this out so ties don’t push people down the list. I was thinking along the lines of competitions with first/second/third places. If there’s a tie for first, you still have a second place. Maybe that comparison doesn’t fit here?

I don’t see the use of scrolling past many placeholder user cards. I can’t display their profile information, so it would be

I agree on not listing private users to avoid cluttering UI with blank cards. I do understand it can be a little confusing though if some of the top spots are taken by private users.

That’s what the Olympics does at least. Source aka Googling and then clicking on one of the first links

… a tie for first place results in a shared gold medal . Both teams receive gold, and the team that finishes behind them receives a bronze medal. A silver medal is not awarded.

Maybe I misunderstand what you are saying

I think the main value of showing everyone would be to see how far behind or in front one is in relation to other striders in the rankings (“can I catch this person?”). For me there is no real difference between mystery striders and having a name displayed in that regard: the person exists and their presence affects my ranking, the name or the other profile stuff doesn’t matter that much to me as long as I can see their completion status

On the topic of viewable profile info: it would be cool if the Lifemap button was greyed out for those who don’t share it (before the ranking was introduced the same would have applied to the profile page, but with the ranking info every strider has at least that info viewable

I really like that I can now see some information about how I am placed compared to the whole population and not just the people with public data. If I am in position x and the next person I can see data on is position x+5, say, then I’ve no idea how close to overtaking me the 4 intervening places are. It would hence be good to be able to see what percentage completion they are all on. I agree that scrolling through lots of screens of “anonymous strider” entries might not be helpful generally though. Maybe an option in the UI to toggle on/off the display of all entries in the list vs an abbreviated list of just the people with public data ? Really looking forward to seeing how this terrific new feature evolves.

Stepping back & rethinking the display a bit (not tying myself to the ‘card’ idea) I came up with this idea: 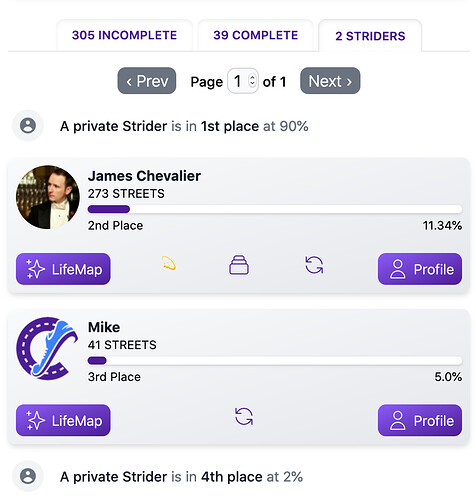 My gripe at this point is that I want to include the completed street count as well. It’s bugging me that all the user cards display the total completed street count for the person, but don’t state that. Instead of saying “273 streets” for my card, I think it should say “273 total streets” (or something similar that conveys this is my total count & not the count within this city).
In that case, the ‘private Strider’ text might change to “A private Strider is in 4th place at 2% with 4 streets”.

It definitely doesn’t seem as bad as I imagined it, and having that info is useful.

I endorse this idea. Thank you for considering!

I’ve adjusted the street lists based on feedback in this thread - that’s released now: Updates on April 30, 2021 (Release 88)

Thanks for helping out, everyone! It was nice to have the opportunity to change my mind a couple times based on your explanations.

A very satisfying update, thanks James!

Thank you James - this is a very useful feature!

Of course, I liked it better before I saw I’ve got no chance of being the first to complete Springfield

I’ve been going this entire time thinking I was first place in my own hometown …. nope

I wondered how I changed from 10 to 11 in just a few hours; that was because you changed how you handle ties (correctly now; one of those minor peeves I usually try to suppress

) And I wondered how our city went from 140 to 379 striders in that same time period; that’s because you are accounting for the private striders. Interesting that I managed to catch it in transition! Thanks for all your hard work.

Take heart, maybe that’s a person who moved away before a few streets were added and they’ll never manage to get those streets and you’ll end up beating them!