There are quite a few streets in my city (Glasgow) that once upon a time were streets but the housing has long since been demolished and the streets left for nature to take over again. I ran one such area today which had six streets listed (all with names) but in reality they are little more than tracks through woodland: 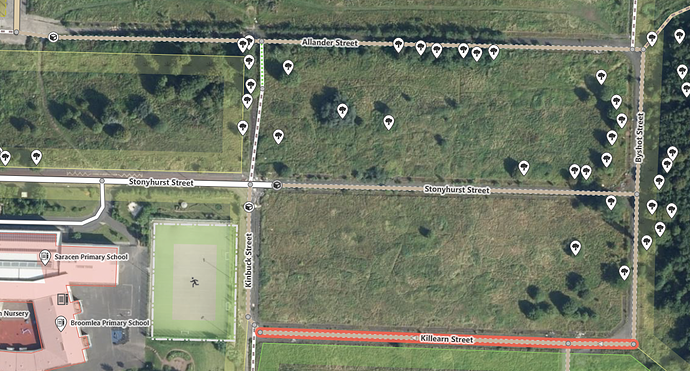 On OSM they are listed as “unmaintained track road” but is it because they have names that they still pull through into City Strides? They are basically impossible to navigate and not very safe.

I’ve marked them as manually complete but I hate doing that, feels like cheating!

is it because they have names that they still pull through into City Strides?

Others with better OSM understanding than I have should chime in.
I don’t know if removing the name is good for the entire OSM world (way more than just CityStrides uses data in OSM and it’s critical that we leave things in a good place for others).

I would not change anything on the OSM side for the reason James indicated, and mark it as manually completed if it’s not something you’re interested in running.

Maybe in the future it would be nice to have a way for us to annotate certain roads on the CityStrides side, specifically ones that are ‘technically’ runnable but actually unsafe. I have encountered that with a few roundabouts and highways in Lisbon that maybe are runnable if you feel like running in an uneven gutter alongside cars entering and exiting the highway, with no shoulder. I have a feeling the people that completed those roads may have done them in the context of a race where the road was temporarily closed…

Thanks for the replies - makes sense not to meddle with OSM too much, I just wonder at what point a tiny track surrounded by forest stops being a street that’s worthy of a name and who gets to decide that!

I have encountered that with a few roundabouts and highways in Lisbon that maybe are runnable if you feel like running in an uneven gutter alongside cars entering and exiting the highway, with no shoulder.

I think this is a good suggestion - there’s a few bits of roundabouts / slip roads where technically it is possible to run but I would be running into 60 mile an hour oncoming traffic, so obviously I don’t!

I’d recommend checking with your city/county/council or equivalent government body to see if they have a “Planning” department. Usually that team will have a city map you can reference for current streets. They may also have maps that show future developments as well; ya know, to plan to run later.

Based on whatever records the government has and considers a current street, I think it’s then fair game to make an OSM change.