The impact of the highway=track removal is huge, and, at first sight, disastrous.

Can you elaborate on the reasons for this change?
I mean, those ways have names (at least the ones that were in CS until now), they are obviously runnable and they are often the most beautiful roads in a city.

James, Most of these tracks and Class VI roads are very accessible and runnable. If there were any that were posted and/or gated, I was taking the same approach as residential roads by changing in OSM to gated and/or access to “no” or “private”. I would personally like to see them stay in the list of runnable streets.

and, at first sight, disastrous

Most of these tracks and Class VI roads are very accessible and runnable.

Oh, ok - just some OSM edits needed to clean the bad ones out

Can you elaborate on the reasons for this change?

It was likely either Unmaintained Track Roads or Should "highway=track" records exist in CityStrides? or me spotting actual high school / college tracks in CityStrides tagged this way & filtering them out.

I’m fine with re-adding the track tag. I’m pretty sure I filtered those out after seeing proper tracks in CityStrides. I was flying blind with OSM tags for a while.

Do you know the name of a street that’s missing now? I might be able to find that in OSM and see if it’s tagged in a way that would remove it from the site. Maybe it’s the same “track” tag issue.

Hi James, see some examples in the attached screen print…

It appears your global removal of zero node streets worked in my city. I just checked the first ten pages of uncompleted streets and all of them showed up on the map. Last time I checked (last week) I found one on the third page. The last update was two weeks ago, so it was not fixed by the normal update process.

I still have at least one uncompleted street which should be marked complete, and the number of completed and incomplete streets don’t add up to the total number of streets. However, I’m only at 66% with 18 pages of streets to complete, so there’s no rush on this. Let’s see if the next update fixes the issue rather than trying to address it separately. At this point I can only consider getting new streets on weekends, so it’ll be a while before I complete my city.

You are right, those streets were changed only 5 days ago. I did however find another street (Kunaweg in city Haarlemmermeer) that was updates last 11 months ago. Also that street did appear in Citystrides last week (with zero nodes) and has now disappeared from Citystrides. So that should be a different issue?

@JamesChevalier
Is there anything I can do to get the incomplete streets into the incomplete list. Any refreshing somewhere or so?
I have started to look for them manually, but it takes forever to go through all streets. As long as the street is in the complete-list, they corresponding node don’t even show up in the node hunter, even if the street ist below 90%. So it is a real hassle to find the incompleted streets among the completed ones.

Hi James today I noticed that ther were more zero nodes streets in Amsterdam? Is that still temporarily?

Today this city has been updated again in Citystrides. 35 ‘new’ streets appeared in the city and my completion percentage went down to 97,5% (from 100%). The old problem (zero nodes) is now also back again. Nearly all of the 35 new streets have zero-nodes. In OSM all new streets look ok to me so I cannot figure out why they look incorrect in Citystrides.

Hope these details help you to improve the import routines from OSM.
In the meantime I got 35 new streets to run, that will keep me busy…

today I noticed that ther were more zero nodes streets

@p.gomes, I noticed the same thing. I also noticed my city (Keller) had an OSM update on 10/20/20. So I think the OSM update brought back the 0-node streets. @JamesChevalier had posted that he ran a global delete on 0-node streets, with, I presume, the knowledge that the next update will pick them back up. Looks like that happed, but they still have 0 nodes.

@JamesChevalier
Meanwhile the data was updated from OSM again (on 2.11.) . Unfortunately the incomplete roads are stilll in the completed streets-list. OSM-data seems be updated correctly though.

If this cannot be changed, can you at least make the missing nodes visible in the node hunter?

Unfortunately the incomplete roads are stilll in the completed streets-list.

Is it possible for you to share a link to a street that should be incomplete, but is marked as complete?

Hi James, I am loving the more rapid updates to incorporate OSM data. During the past few months I’ve been living in a rural area of Portugal and updating the OSM to add new streets, and it’s been a lot of fun adding this surveying element to my runs.

I am having a similar issue as others immediately mentioning above that the new roads are incorporated into CS but not marked as complete, remaining on incomplete despite all nodes completed. Here is a recent example: Rua Carril Fundeiro in Carvalhal, Santarém - CityStrides 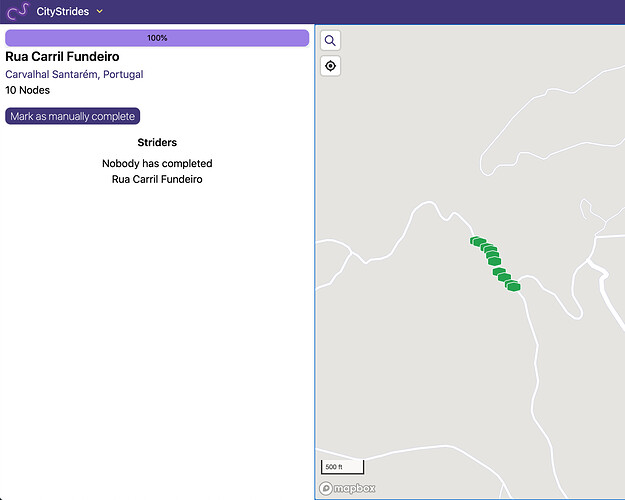 I think I just found a huge area where progress was not being recalculated.

I hope to get this updated code released today, so that the next update properly recalculates your progress.

Yeah, I have two examples, that I have found so far. I already put the links in my first post about this, but they have still the same progress. So these are the same links as above:

HI @JamesChevalier, if that helps, my city shows 1324 streets but the total of complete + incomplete is only 1281, and that number is the same for everybody in my city. Of course, different ratio of complete/incomplete, but all of us 1281 in total. Thanks!