I was about to ask the same question as Liverpool hadn’t been updated since the beginning of October. But a new update has just completed so including three months of OSM updates, so I’m a happy bunny!

Keeping my fingers crossed for an Islington update soon then! By my reckoning I’ve only got 2 streets to go, but CS tells me 47! Hopefully an update will remove the ones I’ve made private in OSM and iron out the bugs of a load of completed ones showing as incomplete. Though I imagine there will suddenly be some new ones spring up too!

Good to hear that cities are starting to update again. I’m hoping it doesn’t take too long to cycle through the rest of the cities.

It is currently one October 10/11 and going a bit faster than a day at a time (so maybe a 28 day cycle). That is my back of the envelope observation.

The update code back up and running … it was off for a while - can’t recall exactly, maybe November to late December?

When I turned things back on I noticed that my OSM data server (I self-host an Overpass API server) was broken. That’s why some cities got updated but didn’t include recent OSM changes. That’s fixed now, though.

It appears to be going through 50-100 cities per hour. I think it can go faster - it’s mainly held up by the reprocessing that has to occur after cities are updated.

I’m not certain if the “zero nodes” issue is resolved.

Yes, I would expect it very soon based on what I have seen in cities I track.

I’m curious about the import/update order too. I seem to recall reading “it’s the same order as the very first initial import”, but I don’t think that order was ever mentioned.

I’m not sure if my issue is the same as the zero nodes issue. The streets that show as incomplete have nodes and they’re all green. When I click go on all of them, they just go to that street and there aren’t any in the sea?

When I click go on all of them, they just go to that street and there aren’t any in the sea?

It only updates cities that have people running in them. It sorts that list by the last updated date.

Not sure if it is related to the zero node issue, but there are a few now that show correctly as far as there not being any red nodes, but when I go to it, there are more nodes listed than there are shown. Maybe that is a boundary issue… see below. All of the “uncompleted” streets are shown and there is only 1 that has any red nodes. The others should actually be complete. 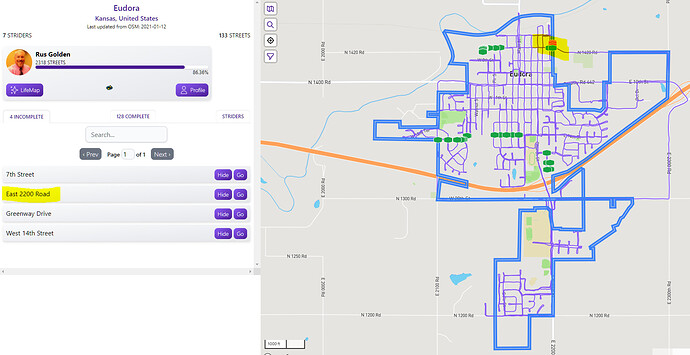 The 2 cities I’m running were updated

@JamesChevalier there’s still the issue in both that my total number of complete + incomplete streets does not match the total number of the streets in the city. The issue is happening to all the striders in those cities.

Hi, @r.weide, the 162,745 figure is a count of all the cities currently in Citystrides. I think James is only running the update process on cities that have somebody actually running them so (hopefully) the actual number of cities being updated (and therefore the update interval) should be far less.