Nodes at intersections, but not mid-block

I am getting a number of completed streets because I have run the crossing streets, because there are no nodes mid-block. Because of this, I can complete the street, while actually only running crossing streets. See the N/S streets in the image below. Given that I want to run all streets, not all intersections, is there a fix for this? 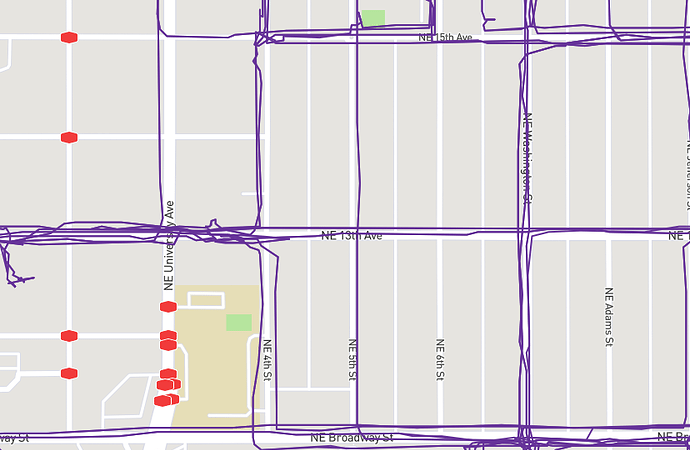 No fix. your personal CS map is what you make count. Each individual will decide for him-/herself what is a completed city/street. In these situations above, my lifemap dictates for me personally that there should be a run-gpx line on each street. So maybe you also want to go and fetch those missed (but completed all nodes) streets and reminisce afterwards how cool your lifemap looks at the end

I can think of some scenarios where you would legitimately not have coordinates between two nodes (curved roads).

I have no idea whether or not it would be acceptable to add nodes to streets between intersections - assuming anyone would even want to do that.

Could you update the streets in OSM to have nodes up and down the streets and then the next update should push them through as incomplete again? Or once they’re marked as complete would they stay this way?

I’ve adopted @petje’s philosophy. You can hit 100% and legitimately say, “I have run on every street.” Or, you can use the LifeMap as a guide, and run the length of every street.

I have two streets left to complete my city at this level.

But, there is also the concept of every node.

I am also hoping to turn every node in Keller green.

We don’t control OSM. You’d need to manually go into OSM and manually add nodes to every street.

CS uses the data in OSM, which predates CS by a lot. OSM is also used by a bunch of other web services, so be very careful thinking about making changes to OSM to make your CS experience better.

I’ve also noticed the same problem, and I’m using the map as a guide. You can also get credit for street parallel to the one you are in if the nodes are under the 20m threshold!

Regarding not having nodes in the middle of the street… what about having CS add nodes automatically between every two imported nodes?

You can also get credit for street parallel to the one you are in if the nodes are under the 20m threshold!

what about having CS add nodes automatically between every two imported nodes?

Adding intermediary nodes to OSM itself would not improve the map. So I concur, we should not consider that approach. Plus, it would be very manual.

It seems to me, although I’m certainly no expert, that if the nodes represent linear segments of a street, then placing interpolated points along them ought to not cause things to break, including along curves as curves are represented by line segments approximating the curve, so the nodes are closer together along curves. Curves therefore probably do not need extra nodes, but I don’t know if adding them would be harmful.