user link: Otley, England - CityStrides
I’ve run the below rod (twice) but it’s these nodes show as ‘to do’.

I would understand if the GPS line missed, but this is plum though the middle. Any ideas? 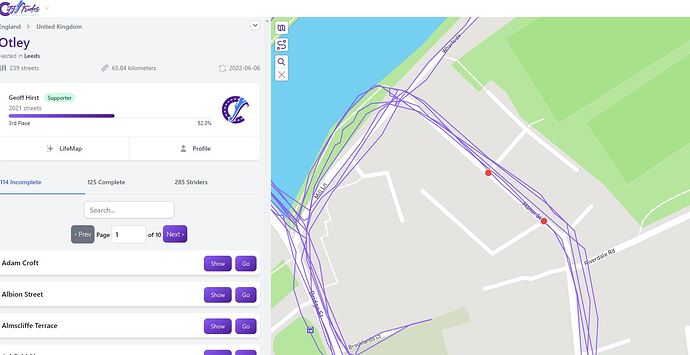 I know I can mark as complete manually, but if there’s a bug, then better to flag first.

I don’t think this is the case here, but I believe if you stop an activity in one location, and restart after a distance, the activity will join those points together, but no nodes in-between would be captured. Your example here just looks like a glitch.

I can confirm at both runs where continuous, but good suggestion.

All your passes seem to be long straight lines, with the endpoints (=GPS recordings) only at the end of the street., further than 25m from the nodes. Either to go slower or do some of the side roads to get some additional GPS recordings would be the solution, I think. Some watches are also a bit stingy with GPS recordings to save the battery, so it might also be helpful to have a look at that as well.

Good day, I had not spotted my replacement Garmin (a while ago) was on Smart Record. I’ve amended to every second. Might be as simple as that.

Yes it will be that simple.