Out of curiosity, is there any way to set the Node Hunter to only display nodes left to complete for a specific city? The city that I am working on (Walnut Creek, CA) has really funky boundaries, so it’s tricky when running near its boundaries if I’m logging streets in Walnut Creek or in an adjacent town. Thanks!

Out of curiosity, is there any way to set the Node Hunter to only display nodes left to complete for a specific city? The city that I am working on (Walnut Creek, CA) has really funky boundaries, so it’s tricky when running near its boundaries if I’m logging streets in Walnut Creek or in an adjacent town. Thanks!

I came to the forum just now to search for the same info. I don’t think there is. That would be a very helpful feature for me, too!

I became a contributor recently, and the Node Hunter feature is great (even without your suggestion to make it even greater).

I think this idea has already been mentioned: Node Hunter in the city view

I noticed because I wanted to vote, but I have run out of votes and the other one already has my vote

I realized this after merging the topic … which I’ve since “un-merged” … I really made a mess of it - sorry. I’m going to see if I can clean this post up a little bit @phil.klotzbach

Anyway, this is slightly different from that topic. The other topic was about getting the Node Hunter feature onto the city page. I’ve done that, so I’ll go close that other topic.
This topic is about making the displayed Nodes only those within a chosen City. So, some kind of “city selector” interface attached to Node Hunter that would limit the displayed Nodes to those that fall within that city’s border.

I was thinking maybe not necessarily “fall within the border”, rather “are associated with city.” I have found a few streets that actually have nodes that go quite a bit outside the city.

I’m not sure if this is something one should try to fix in OSM, so I welcome your opinion.

Until, nodes obey city boundaries, I want to see them outside the city. There’s a good chance I may try to run that street, trying for 100%, and to get a start on the next city.

I havent seen this thread before but requested the same thing in response to the change in looking at incomplete roads for a city. I have to click on each road individually instead of being able to just do them all at once, James said thats what node hunter is for but me and several others point out that it will show you nodes outside of the city or other problems. I know I have several times clicked on several dozen roads to try to figure out whats left and what goes outside the borders. Letting contributors select all roads for a city at once or allowing you to limit node hunter to the selected city would be very helpful.

The problem is that the current database doesn’t know which nodes are inside and outside the city. (The map is not generated by the database but by a third party resource.) So the node hunter can’t return information about whether a node is inside or outside the city.

HOWEVER, before Covid19 and the explosion of people joining the site, updating the geographical database to take into account city boundaries and updated road information on OSM was high on the priority list. Once the Garmin integration is released for everyone and the Strava backlog starts to seriously shrink, I expect this to become the next major project for Strides.

I disagree, the database knows what streets arent completed for that city so it can just call the method for each uncompleted street to show the missing nodes (granted it would show the green nodes of those streets as well but that seems like a good tradeoff). Some nodes outside the city will show up but you have to do those for the city to be complete anyways (until that bug is fixed)

I’m not sure who you’re disagreeing with. Or what you think is wrong.

Hi Fred, I’m disagreeing that it doesnt know which nodes are inside/outside the city. It knows what streets belong to a city to complete it so from that it knows the nodes that belong to a city. You said node hunter couldnt return that info which doesnt make sense to me based on that info. Now if you are strictly saying it doesnt know which ones shouldnt be outside the boundary I’m not sure its relevant because you have to run them anyways so you want to know what they are to finish the city. Its often I have to figure out which nodes pop out of the city to run them which is why having node hunter show just the nodes I need to finish a city is helpful.

I think I misunderstood what you were saying.

Node hunter does not know or care about city limits, which is what I thought you were concerned with. Since each city’s nodes, whether actually in the city or not, is associated with that city, node hunter will display any you haven’t run for a specific city (subject to the 1000 node display limit), whether inside or outside the actual legal city. And each city is a separate entity. (This leads to the duplicate street issue.)

At some point it looks like the nodes will be refreshed for each city, removing nodes that aren’t on publicly accessible (or non-existent) streets, while adding nodes to streets that weren’t originally imported. And the nodes outside city limits will also be removed. This is why errors in the data need to be corrected in Open Street Maps. This will also get rid of many of the duplicate streets. (It won’t get rid of duplicates in nested “cities”, and without a complete redesign of the database I’m not sure what can be done about those.)

This is why I’m focusing on nodes inside the city at this point.

Just wanted to add my support for a ‘city specific filter’ for the node hunter. I also live in a city which has copious (and sometimes convoluted!) boundaries between different boroughs. It’d be good to toggle for nodes in a target ‘city’ only when near a boundary

I was looking for this feature also, it’s a tedious work to find the necessary nodes left, with our cities that seemlessly flow into eachother

Now I look at which street are at the border, I look them up in the incomplete streets list, click on them and see of which nodes they consist coz sometimes I have to run quite a distance outside the border to complete them for that city.

Adding my support for this feature as well. Even having node hunter available on the city map itself instead of having to go to lifemap would be useful even if it didn’t filter at city borders.

The city page should include NodeHunter… Maybe you’re logged out of CityStrides?

My lifemap on iPhone in Chrome browser with node hunter available.

design … The NodeHunter button is trapped under the ‘info’ button.
I’m working on a redesign now that pushes the CityStrides-specific buttons (Filter, NodeHunter, Live, etc) to the top left. 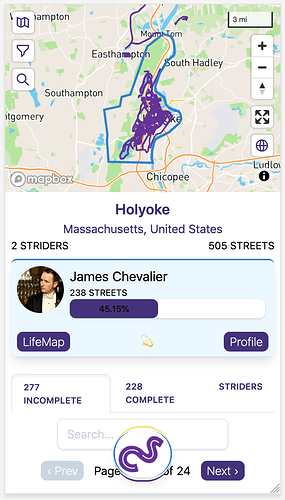 Ability to get full screen map in city would be useful too. When looking on phone I have two tabs open on my browser to make sure I’m hitting borders of town in city map and current location in lifemap with nodehunter running. Clean up on the city map would be very appreciated. I tend to plan my route on the fly and not ahead of time so looking at the map a lot.

And I just totally confused node hunter with “Find my location” That is what I really want on the city map.