Hello, still newish around here and learning. i had a run from this past week that just synced with the lifemap and i see there are 2 nodes that were ‘missed’. Its clear its because the gps data was slightly off the road, but from what i’ve read it should grab them as complete if within 75m of the nodes…seems very unlikely i was >75m away. I know i can mark the street as manually complete, but aside from not wanting to do that, it also would mark the rest of the street as complete, which is just inaccurate. Is there a way to mark individual NODES as complete? 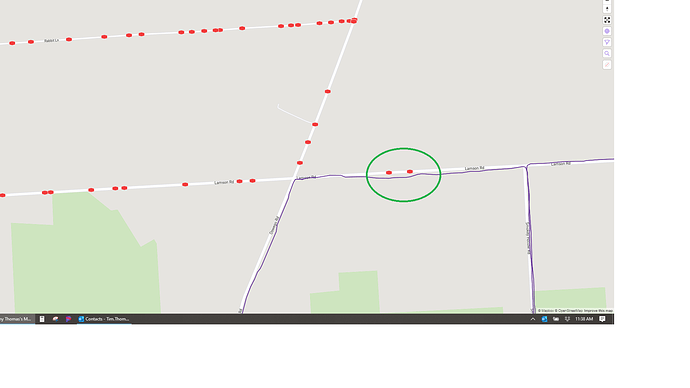 (Edit: google maps distance measurer shows its only ~ 110 feet away from the node, so well within the 75m boundary)

No way to mark nodes as complete outside for the manually marking the street option. What kind of watch to you have btw? I know I have had issues with my Fenix with all the GPS tracks shifting left and had similar problems as this (I just ended up rerunning the few sections where it mattered). I switched it to my right hand and I get much better data now. I started a thread on Garmin support and this seems like a very widespread issue.

About the Node, Street, and City Data

Nodes : if you run (ie your GPS data has a point that is) within 25m of a node, it is counted as complete. You may capture nodes on streets you weren’t running on, or miss nodes on a street you did run based on this logic

As Dallas says, your options are:

@dallas.devries switching from your left to right hand fixed the accuracy of your GPS data?? I’ve never heard that before. Might be something to try at some point.

ahhh…its 25m. i must have converted it in my head to 75 ft and then thought it was 75m. So it seems its working as intended since the track was ~110 feet off from the center of the road. bummer. thanks for the clarification.

I have wanted to change that code from the moment that I wrote it.

@davemorin here is the thread I started on Garmins support site. If you look at your GPS tracks you’ll be able to see pretty quickly if its affecting you or not. Some Garmin devices work fine but I know it happens on my Fenix 5 and Fenix 6 Pro and several others having same issue. Some are posting some more extensive testing they have done with how they wear their watch.

Good link @dallas.devries. I was happy to read “My 5 year old Fenix 3 and my 6 year old Forerunner 220 both do a better job from an accuracy POV.”

I’m using a FR235 and have not had a problem. Missed nodes have been my fault.

I agree. Granted I’m new, but I hope I don’t ever feel compelled to do that. Would be cool if manually completed showed in a different color.