Street in progress, but 0 streets completed?

just a question, i did this run yesterday, a big 23 miler, and i guess i expected 70-100 new streets completed, since i didn’t run here before. I see 15 streets in progress, but 0 in completed? some hiccup in the scripts?

i don’t think this is about lag due to lot’s of traffic on your servers, since ‘progressed’ is calculated…

Yeah, the system finally caught up with the work last night.

This is a perfect test for Node Hunter! Can you zoom into that area on your LifeMap and then click the magnifying glass icon on the map? That’ll show you unfinished nodes for any streets you haven’t completed … I’m interested in whether this area has lots of unfinished nodes.

In the meantime I’ve also rerun the sync for you. I’ll take another look after work today.

Wow! first time i use this lifemap node hunter! COOL! and yes there are red nodes, also some red ones that should be registered to nodes run.
below a printscreen of my mobile just 1 minute ago.
The nodes west of the green area ‘heiveld’ should be added to my streets run of course. also those to the north.
But more to the east are nodes i still need to catch! really cool this way. 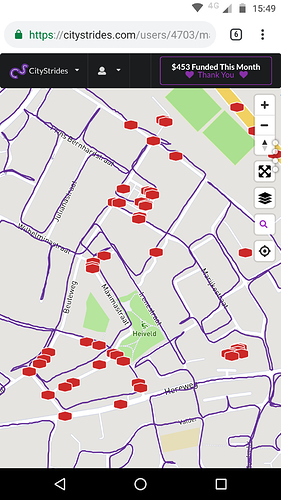 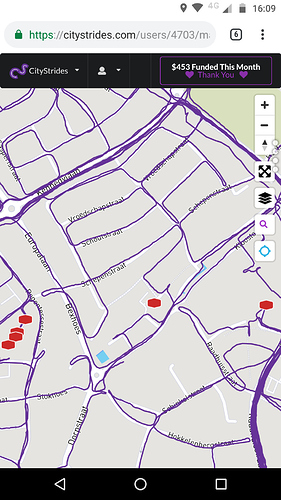 citystrides_node_hunter_wrongly_red1080×1920 548 KB
In my opinion these reds should be green instead. It’s clearly visible i have gps tracks very close or even covering those nodes. So are these false negatives?
petje (Patrick Coenen) November 20, 2018, 8:54am #6

Hi @JamesChevalier in your reaction above you said that the run was re-synced? shouldn’t the ‘streets completed’ be filled by now? or is there some server waiting time involved here?

Woah cool - this is really useful!

Can you provide me with Street names for some Streets that you believe you have completed but are still displaying Nodes in Node Hunter?
In your last screen shot, for example - those four Nodes on the left look like they’re attached to a completed Street. Your first image also has a lot of Nodes that appear to be completed.

I’m pretty sure that this is tied to an ongoing issue with my code… I’ve got it in my To Do list as “solve issue where path is not within 25m of node, but is on a street” & I can further explain it as:
Each Street is made up of many individual Nodes. In the same way, each Activity is made up of many individual Paths (horrible name that I blindly adopted from Runkeeper because they were the first run tracking service I worked with).
My code takes each GPS coordinate (Path) from your Activities and checks to see if there is a Node that is within 25 meters of it. If there is, then it marks that Node as complete. The idea here is that I’m accounting for some GPS drift / running on one sidewalk or the other down a street.
This has a funky edge case where you might have 10 GPS coordinates down a Street and that Street might have 5 Nodes that are spaced out in a way where you could conceivably run down a street and not match any Nodes.

So if you share some Street names with me, then I can compare the Street Nodes with your Activity Paths and see if this is what’s happening…

First i think it would help if you could get rid of the ‘manually completed’ nodes. They are polluting the view on the nodehunter.

That one you mention with the 4 four completed nodes is the stadhouderstraat in the city Brunssum. That one more on the right is the sint brigidastraat.

The first printscreen is from my last run on sunday, and as i mentioned, som detection failure is visible in the nodehunter. i did at least 50-70 new streets for completion, but they are not showing up. 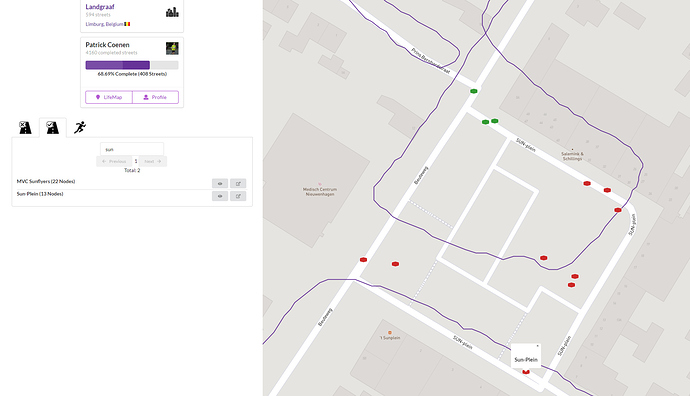 citystrides1944×1116 252 KB
This is one of those streets where a lot of red dots are in the nodehunter, The street is flagged as completed, but the nodes are still all red!

Happy code-digging there!
(and maybe you could have al ook why the streets aren ot visible under my run as completed? I’ve done a LOT new ones with that run, but nothing to show when i analyse my run.

Do you have private activities that cover that area? Maybe I’m not seeing everything.

If you’re viewing Heigank, do you see many red Nodes?

One thing I’m realizing for this activity is that there may not be any completed streets because they were already completed by other activities.

I’m noticing that it lists all of those streets as completed manually. I don’t have a way of seeing when those manually completed streets were marked that way.

On that ‘streets completed’. I get it now. I totally forgt about the following:

I did the 36k on sunday with 2 phones (battery life was not enough for 3,6 hours constantly looking to the map) and in the middle a short break to refill my suplies and switch phones. In that time i registered my run with strava and saved as private run. My polar watch registered the complete run, and after completion, i deleted the private strava run and uploaded the complete run from polar.

So the private runs in strava have already completed all those streets but since i deleted them, i don’t see the intermediate private and deleted run anymore in citystrides.

On those nodehunter things:
For stadhouderstraat for instance, that part with the red nodes is because this is a parking ally with a big fence in the middle. Since i couldn’t compete this in a normal way i did the leftover by manual completion. I think i flagged that street with ‘partly not accesible’.

So for me, it would be helpfull if my manually completed nodes would be invisible in the nodehunter, since for me that’s done in the sense i did what i could in a normal running way.

Another thing i posted earlier were those many red nodes although the street is mentioned as completed.

Sun-plein is one example of last sundays run. 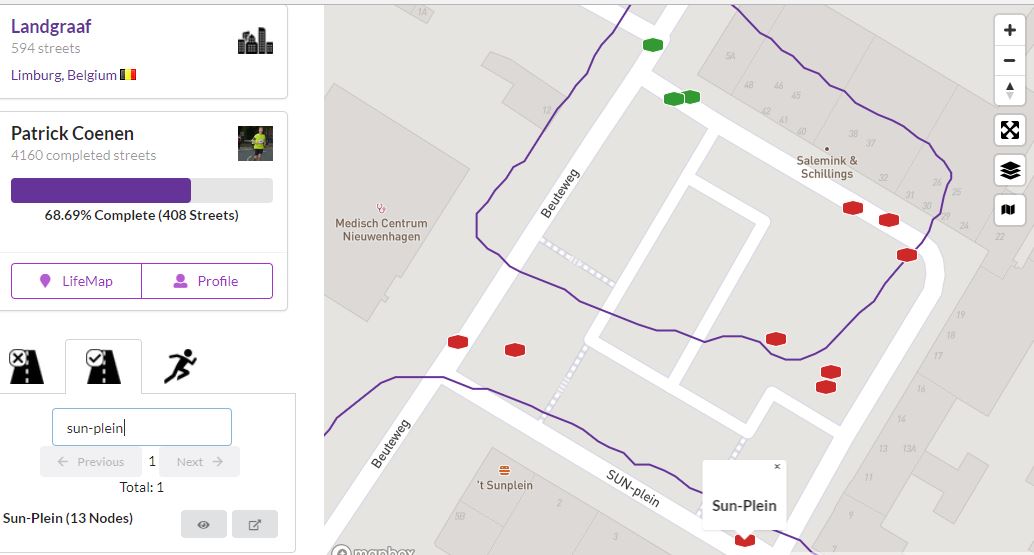 and now again i see why: 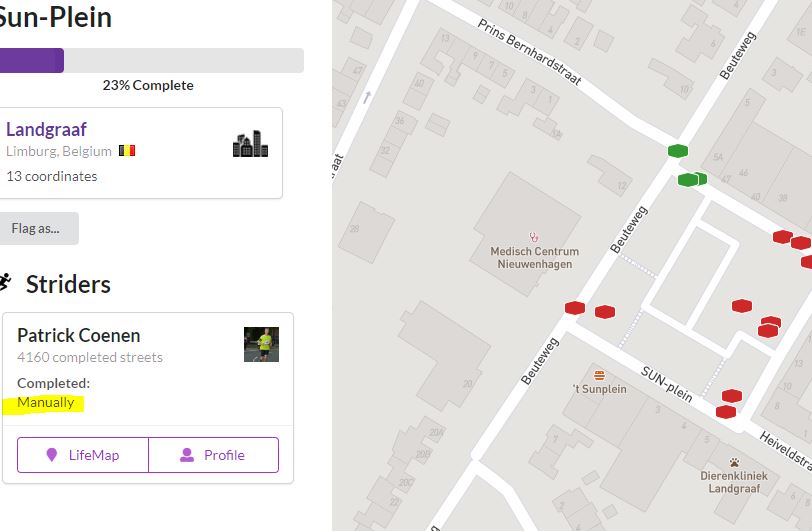 *Slight panic mode*
I now discovered something! 2 post before I explained that my private intermediate strava registrations were used to cover the sunday run that i then deleted when finished. And an hour later I uploaded the complete run to strava via my polar registration result.
Because all those streets are registered by a later deleted strava run, they ALL have now Manually completion!

No resolution on anything, yet - just a quick update with some more details…

Marking a Street as “Manually Completed” doesn’t do anything at the Node level. It only adds the Street to your collection of CompleteStreets. So that’s why all of its Nodes still appear as red. This was a decision I made on purpose, and I’d need a lot of convincing to change it.

The data structure looks like this: Street, Activity, User, and CompletedStreet to join the three.
When a Street is completed, it associates the Activity responsible within that CompletedStreet relation. If that associated Activity is deleted, the CompletedStreet record is left as-is.
This is good news! I can cook up some code that iterates through people’s manually completed Street, checking to see if it can be associated with an existing Activity. I can then also run this same/similar code automatically when an Activity is deleted, to make sure that there’s always a valid connection.

About that nodes to completed when manually done. What about a setting in the user profile? When a user clicks on an object to be manually completed, the logarithms could easily put those nodes to green if the user chooses so in his/her setting switch. Although the nodehunter functionality is great, it is still the ‘non street’ data that keeps being in the way visually if there are still nodes to hunt in an area/city.

I’m noticing that it lists all of those streets as completed manually. I don’t have a way of seeing when those manually completed streets were marked that way.

And I am 100% percent sure i didn’t do that myself. I covered those streets last sunday and it was the first time in my life I was on those streets iwth a gps tracker. I surely didn’t flag them as completed at home on the desktop.
But i am convinced it has to do with these intermediate private strava registrations that i deleted after the run was finished and uploaded the complete run from another source to Strava.

That is also clear, because the nodes are not red in the nodehunter!

How do I find the red nodes hunter on my life map so I can see which ones I’ve missed?

If you have access, it’s the magnifying glass on the left side of the map.

Hi @petje, real beginner question here: what’s the difference between green and red nodes? I am guessing green means completed and red is not. However, on the Node Hunter tool for my area, if I zoom in, I ONLY see red nodes - even for an area in which I’ve completed some streets. So I’m confused and not sure I’m understanding the basic premise here of the colors. Thanks in advance & happy new year.

Yes, green is covered, red is stil to cover. And in the lifemap you only see the nodes you still have to cover. But as you look to a complete or incomplete steeet, you see the green and red nodes together. Hope it helps you.
Good running in 2021!