Perhaps it is the new map, not sure, but it seems like lately the lines take a day or more to show up on my Lifemap. I use “sync now” and get credit for the streets and the nodes go away however the activity doesn’t update onto my Lifemap for quite sometime.

The reason this is important is I literally do my activity turn by turn while looking at the Lifemap. Today I cannot see my activity from yesterday so it will be hard to be sure I got all the streets. I do not trust the nodes only because my goal is every street not every node.

I guess my question is, what’s the delay and is this the new normal?

The delay varies and is graphed out in Status as “LifeMap Delay”. It’s not common for it to stretch out past “minutes” into “hours”, though, let alone a day. There’s probably something else going on.

Your public LifeMap (we all have two versions: public/private) has the area filled in: 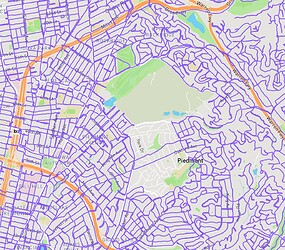 Is the area filled in for you from another device, while you are logged in?

Of course right after I posted the comment it filled in.

It was 16 hour delay. I have noticed lately that it is much longer than usual. Perhaps it’s how big this thing is getting!

I’m currently trying to fix another issue that we had discussed before with my Grand Canyon hikes not showing up but after lots of reading here I might be able to fix in myself. Question: Will my Lifemap grab really old activities (2016) if I edit them in Runkeeper now and then sync? I deleted an activity in citystrides that may have been “in the way” of the real activities. I tested it out first on a race that I ran in Sacramento but forgot to shut off the Runkeeper and ended up with 56 miles on the freeway. That one corrected so

It was 16 hour delay

That’s highly unusual/unexpected. If you notice a delay that’s longer than Status suggests, please try viewing your LifeMap on another device while logged in & let me know what you see.

Will my Lifemap grab really old activities (2016) if I edit them in Runkeeper now and then sync?

I think it should update in CityStrides if you:

That should re-sync the fixed activity & reprocess it to update your progress.

I’m having the same issue again @JamesChevalier ,very long delay to get the lines to show up. the activity syncs pretty fast and I can see the total streets but the lines can take minimum 4 hours to over 24 hours. Also, according to the lifemap delay it should be zero delay.

Yesterday’s activity is still not showing on my lifemap. although the other day it was like 16 before I finally said anything on here (above) and then it showed up moments later. lol

Is it at all possible that your LifeMap was updated after saving a new activity?
I think I still have an issue where the job that builds the LifeMap can run faster than the job that sets up the data that’s used to build the LifeMap.

I’m working on a fix for this issue, but in the meantime let me know if your LifeMap is effectively lagging by one activity.

Yes, it appears to require another activity to complete before it will fill in. When I completed one yesterday it filled in both at the same time very quickly.

I just finished one for today that is not filling in yet but the nodes are updated and the completed streets are listed.

I guess my tactic will have to be to alternate areas that I work on because I rely on the lines while I’m doing an activity to make sure I don’t miss anything. I’m one of those weirdos who is doing every street not just every node.

Yes, it appears to require another activity to complete before it will fill in.

Alright, that’s “good news” in that I’m on the right track.

I guess my tactic will have to be to alternate areas that I work on because I rely on the lines while I’m doing an activity to make sure I don’t miss anything.

Yeah, that seems like a solid plan. Another idea (until I get a proper fix out) is to track a cool-down walk as a separate activity after saving your workout. I think that might be enough to jiggle the handle.
I am currently working on a project that will fix this issue, but it requires that I set data for all 28+ million activities.

It’s tough to estimate, but I’m really hoping I can push things through in the next couple weeks.

I’m one of those weirdos who is doing every street not just every node.

I think they’re the weirdos

and I’m really looking forward to the day I finally wrangle the data and code to get things working without nodes (or at least no outwardly-visible nodes).

I want to make you all run every single bit of street.

I love hearing about people enjoying CityStrides but this just

takes it to a whole other level. It’s impressive that your response to a, likely, brutal day of work is running/walking. I’m happy to hear my work helps you.