Was looking at leaderboard in Germany and found 3 American cities in Germany ?
Here’s one in Hamburg 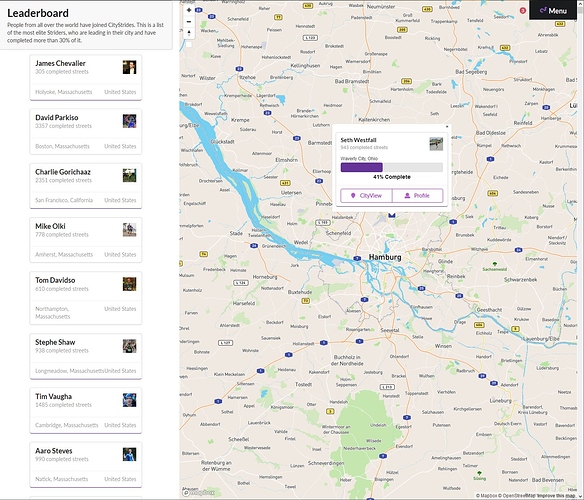 Back when I imported all this data, I did so in an un-monitored / automatic way

I used a tool that gives you latitude/longitude for whatever you provide it - in my case, it was the city/region/country name set. I’ve seen a few cities are misplaced… This example is the worst I’ve seen - usually it’s just a situation where a city is supposed to be in e.g. Belgium but instead it’s showing up in Luxembourg.

And almost all cities of the south part of the dutch province of Limburg are (still) in the belgian country, which is of course not correct. (i know you have enough to do, but who knows, one day…)

yes, exactly that region. There is a dutch limburg and a belgian limburg (they used to be one, in the time when belgium belonged to the netherlands), and all the dutch cities are now marked with the belgian region now.

There’s still a couple of misplaced cities.
Only striders in Russia and Taiwan are wrong.
The northern most in Germany at Flensburg is wrong.
Just west of Hanover in Germany…