Include city street count in the list in profile view

When looking at other strider’s profiles I never know how impressed I should be unless I click through the city list since the percentage complete ranking doesn’t give any indication as to the size of a city. It would be nice to have the street count added to the completion metric, along the lines of xx.xx% of yyy streets. 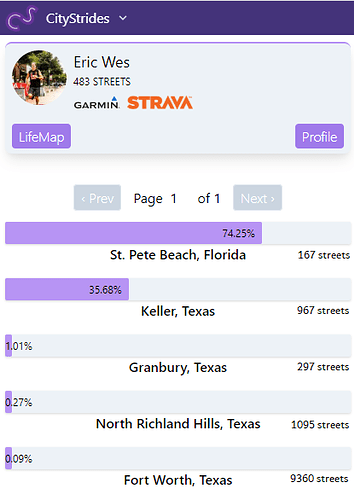 I personally would like to see my count out of the total as well as my ranking.

With zero performance issues, I can toss the street count in there. That’ll go out in the next release.
When I have a moment

I’ll see how I can include the completed street count without destroying performance.

I don’t have a “ranking”, exactly. I have a total count of Striders, ordered by percentage complete, so I have some semblance of ranking outside of the 100% folks. If e.g. 10 people complete a city, there’s no discernible difference between rankings 1-10.
It might be possible to back-fill data that can determine ranking by adding a completed_at value which I can probably source from some wild db query that gets the start time for the activity that created the last completed street for the city.

I’ll leave this idea open, so I can work on it when I’ve got a bit less backlog urgency.

I realize many people could occupy first place but thats ok! It would be fun to see! I’m definitely more interested in my completed count out of the total than the strider ranking.