I would love to see two %scores, one including manually completed streets, which may take you to 100% in your city and is totally up to you to decide what you find reasonable to set manual complete and one excluding manually completed streets that you can use to honestly compare with other striders in your city.
In my city there is a strider who runs much further than me but also who puts many streets to manual completion which is his good right. However, me being a bit competitive I would like to honestly compare between striders as well.

I’d be interested in what people choose to mark manually complete that they didn’t run. For me it is only private drives or non-existent streets that I then edit in OSM so they wouldn’t appear in CS when the map gets updated.

There have been discussions on when to manually complete before. For many people that is a personal choice and it will be a difficult to impossible task to come to a consensus on that. I have put only two streets on manually completed because I am at 88% and the last nodes cannot be reached without putting myself in harms way. Others put manual completion when they have ran through a street. That is why I am proposing to have two % One including manual complete which will be everybody’s personal choices and one without manual % complete that can objectively be compared.

@RichardRichard, I understand the idea and why you’d want to see this, however my personal view here is that I would prefer not to see the two metrics.

Of course this allows for liberal completion of streets, with the most extreme scenario being simply marking everything as complete manually without actually having done any, and claiming 100% of a city. While I understand why that would be annoying to see someone on a leaderboard that has done that, I’m fine with that personally.

I’ve made the decision to not mark anything complete. If I cannot run the node, then I go to Open Street Maps and fix the map. Now I’m working on my patience, waiting for the mapping data to be updated thus generating the nodes (and deleting the nodes that are impossible to get to).

Fredrik - that is my way of operation right now too.

I do what I can, knowing that a number of streets that say they are not completed will be once my OSM edits are brought into CS. One of these days James is going to update the maps and my list of completed streets is going to jump a bunch.

That is a change from when I first started on CS. The old data was SO much worse that you had not choice but to use manually complete at times (nodes off by 100s of yards at times)

Removing the manual completion and forcing people to use OSM in order to get 100% is in my opinion completely ridiculous. Hey come join CityStrides, part of your subscription to using the site is learning the ins and outs of changing an open source mapping tool!

I’ve found that the more rural the area the more manuals needed. I have 28 manuals (out of 4000+) If I didn’t do any tresmapping I would probably be well over 100 manual completes. There are a tremendous number of private drives around here on the map as well as random driveways that aren’t streets. If you’re into updating OSM, cool…you do you…but I think its unreasonable to expect everyone else to learn the nuances of mapping or to force them to update OSM. Anyways thats my take.

@fredrik.coulter, @jpbari, @dallas.devries- I didn’t mean to turn this thread into a debate about OSM updates vs (/in addition to/instead of) Manual Completion- that place for that is in the link in my previous post in this thread. I only meant to bring that up to explain my perspective on @RichardRichard’s original idea.

What do each of you think about the specific idea of having a second completion metric shown as he originally outlined?

I agree with your take that having this feature would be mostly redundant. A compromise solution that wouldn’t clutter the layout might be to have the Completed Streets page from the profile view accessible for everyone. It’s not quite what @RichardRichard is asking for since the streets are not linked to a city, but it would be sufficient to show how much a strider is using manual completion.

I don’t run streets that are too dangerous to run - e.g. major roads with no pavement (sidewalk) I would manually complete them but couldn’t alter them OSM for obvious reasons! Everybody is different in this case so see no point in having 2 different scores at end of the day this is just down to individual choice and circumstance

From all the replies it is clear to see that the percentage completion based on the current system where manual completion is included doesn’t give a fair comparison between striders within one city as the choice for manual completion is a personal one and where some people go to OSM (like me) and some dont.
Hence, if you want to compare between striders a better system is needed. My idea of having two scores, one including and one excluding manual completion seemed to me easy to implement but if people have better solutions, I would be glad to hear them.
Adding maybe some clarity, take a look at this street. OSM wise the nodes are placed correctly. However, you need to do a couple of strange turns to hit all the nodes ( as I did) but somebody else may say that he has traversed the street and mark it complete. These kind of streets with nodes are common in Netherlands, maybe not in other countrys. Halleyweg in Dordrecht, Zuid-Holland - CityStrides

I look at that street you reference and my first reaction is that it is set up in OSM incorrectly. The off-shoots between the buildings seem like they should be service=driveway, service=parking or similar and in my mind should be changed in OSM to reflect that. Some don’t have the knowledge or desire to fix the OSM, I get it, and that is one of the reasons manually complete exists.

I admit that the areas the I run in don’t seem to have a large number of striders using the manually complete button, either due to the nature of the OSM data, the relatively low number or Striders, or maybe I just don’t look at the records of others enough to notice it.

In that way, I feel much like @davemorin does, that the vast majority of those two different metrics would be identical, so a “need” to fix it doesn’t exist in my opinion.

This solution also ignores intent. If a Strider were to run a street like the one you mention, not run the driveways that are included and then both go mark it as manually complete AND fix the OSM, even once the updated OSM data is brought into CS, it would still be marked as Manually complete (as far as I understand it) So that Strider will have actually run the street, but you are lumping all manually completes together.

I have marked one street manually that no longer existed and was now gated. The only other person who 100%ed the city it’s in had also manually marked it. I updated the data in OSM.

I’ve considered manually doing others where the last node is hard/impossible to get to…but then I just got a little ambitious. There’s no adrenaline rush like sprinting through well-marked private property…I save those nodes for rainy days.

Recently I ran 6 miles just to get to the small neighborhood with the street I had wanted to do and, when I got home it turns out I missed the last node of the street, so I need to go back at some point…but hey, that’s the whole point of this site right? 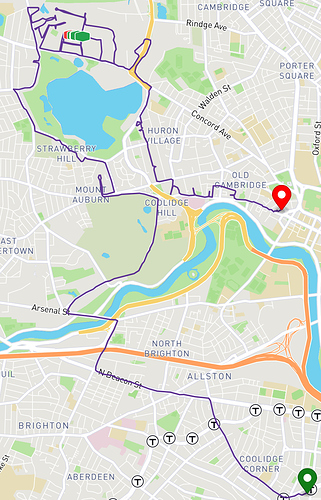 yup, sounds like my way of thinking. Only the roads with high speed traffic and a missing node I mark complete after I have done all possible things to get close enough to the node but simply cant reach it. Also I edit that road in OSM.

Actually there is a change you can (and probably should) do in OSM if the street is honestly too dangerous to run on. (Like Interstate highways.) There is a tag that you can add that says no pedestrians.

This doesn’t require changing the underlying road or anything dangerous. But CS doesn’t pick up nodes on streets that are for cars only.

(Of course, you’ll still need to wait for the data to be updated here. I understand that patience is a virtue.)

These roads I’m referring to do have a side path and by local osm administrator I was told to use foot=use_sidepath because foot=no would give problems with navigation softwares. This was brought up in a different discussion already so let’s not continue a discussion on osm editing in this thread.

On that Dordrecht street, i think as OSM mapper those side thingies at the buildings should not have the streetname, and should be service roads. On the other hand, stuff like this, i do run, it’s 20-40 meters only and doable and reachable, so why not. It’s a citystreet. Would those sevice roads be gated, i would manually complete the street, and in OSM give the service road a gate and the tag access=private.

For roads that don’t have parallel cycleways or sidewalks, it’s official foot=no in OSM because to dangerous to run/walk. Most of the time those roads are the kind you actually don’t Want to run! highways and freeways are not for pedestrians. If there is a sidewalk or cyclepath beside it, go run! At the end your lifemap is your own and personal evidence

Agree with Patrick, your lifemap is your own

I think a lot of the real competition could come in form of leader boards and the challenges vs % completion of a city. Plus are there really runners going hog wild with manual completion? The problem with escalating the “honest complete %” is that it would incentivise people to tresmap or run in dangerous places. I do a fair amount of tresmapping myself to minimize manual completes but I don’t expect others to do it and there are still plenty of places I will not trespass on due to sketchiness (I don’t want to run into someones backyard). The bigger problem with any real competition right now is the duplicates street issue that plagues the challenges and leaderboards completely invalidating them.