GPS had me running through houses - how do I correct?

Hi All, I have searched but cannot find the answer to this. My GPS screwed up one day and has me shifted just to the West of the streets on my run and so they did not count any progress. I am wondering if there is a way to fix this. The only thing I can think of is wait until the whole city is done besides what I covered in that run and then go in and manually complete them all. I use Garmin. 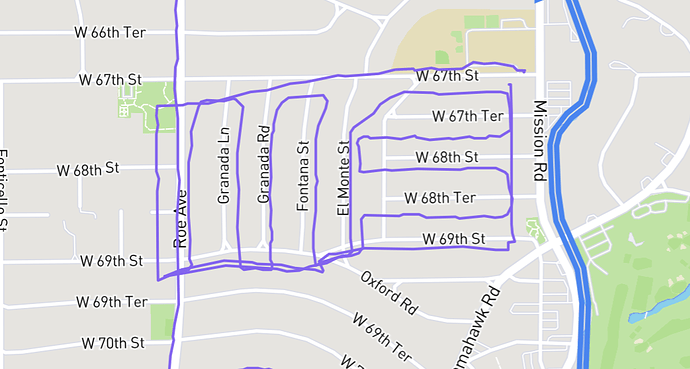 I used WTracks app one time with mild success to achieve a similar goal. The UI was a bit wonky IMO. Essentially it follows workflow of this lengthy forum post.

In all honesty, it wasn’t worth the time I spent trying to move every point in activity file to match up with streets. I’d recommend instead to just re-run those streets. Consider them bonus miles!

I generally accept the occasional GPS drift as part of the challenge. It’s what makes each person’s LifeMap unique. If it’s really bad though I will occasionally use GPX Studio to fix the traces:

there are several tools found on the internet for correcting gps tracks. Most of them are for free.

Wtracks ( WTracks ) is really good for this, as you don’t have to adjust every point, you can just grab the whole route and move it in any direction. In your case, just move it a little bit to the right/east. I used this when Garmin had the New years bug, was it Jan 1 2021 and my route was like 50 m off all the way

This is a nice tool, the course shift is a useful feature!
I really wish there was a tool that lets you treat the track like it’s a necklace lying on a flat surface, to be moved around with a bunch of shapes. Track offset by 30m on a long straight? Use the straight tool to push all the points over. Track cutting a corner? Use the corner shape to make it follow the real route… I think a selection of 4-5 shapes would make adjusting tracks super quick and easy.

Thanks everyone for the help!

Did it cause you to miss nodes? Unless you a LifeMap perfectionist, I’d say no big deal. The search radius from GPS trace to node is 25 meters, so you may not have missed anything in CS.

I really wish there was a tool that lets you treat the track like it’s a necklace lying on a flat surface, to be moved around with a bunch of shapes. Track offset by 30m on a long straight? Use the straight tool to push all the points over. Track cutting a corner? Use the corner shape to make it follow the real route

There use to be a glorious tool called Strava SNAP. It wasn’t originally affiliated with Strava; just a guy’s project to correct data going into Strava. According to internet legend, Strava bought the tool and then scuttled it.

Someone else mentioned RunKeeper having this ‘snap’ ability but I’ve not personally tried it. GPX Studio which Graeme mentioned above seems to do snapping as well. Also haven’t used extensively so don’t know what the final results are besides the street snapping (ie will it alter mileage, speed/pace, elevation, etc)

Can you share the URL for this activity?
I’m interested in what comes out the other side of Mapbox’s Map Matching API with this GPS track… I might be able to build out a kind of “reprocess this activity with corrective action” feature.

Hi! I am new here but I think this is what you need

Interesting … the GPS drift is enough for it to think you’re taking turns. This is close to the beginning of your activity, and it seems to be snapping to a walking path that’s a bit further south from W 67th St. 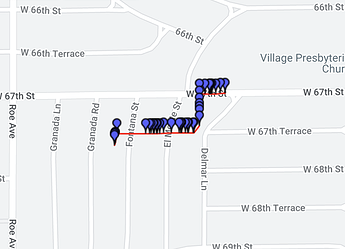 I can try poking at things a little more, after my current projects are finished up, but it doesn’t look like it’s going to be the drop-in magic fix that I had hoped for.