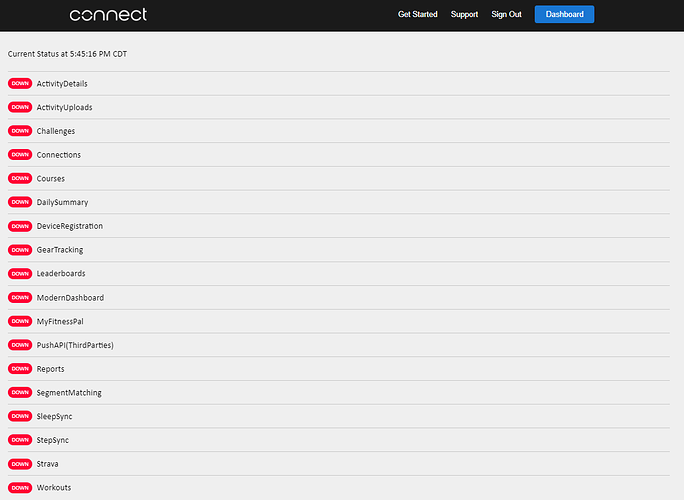 Still down. No official word yet. Big day of striding too.

A couple of sources are saying Garmin is the victim of a ransomware attack.

it’s been 24 hours now - can’t be good! I might play around with downloading the activities from my watch on to laptop (connect via charging cable) then upload to Strava then switch CS syncing from Garmin back to Strava. Whew!

Strava has a nice dashboard that shows the flatline Strava Status

Wow, that flatline is bizzare. 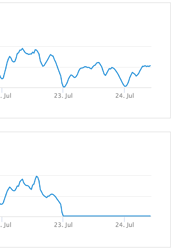 Interestingly, even though I did this a couple hours ago, only one of the two activities shows up on my life map currently. The other activity (Fredrik Coulter's Activity on July 23, 2020 - CityStrides) hasn’t shown up on my life map or the city map yet. I may report this as an issue if it isn’t there tonight.

The next problem is the fact that every time I run I use a different route, usually created using Garmin Connect. (How else can I complete the city?) I tried using Google Maps, but it apparently has a limit to the number of turns in a route. So I created an account on Map My Run to create tomorrow’s run. I then exported it as a gpx file and saved it to my watch. (If you’ve got a Forerunner 945, don’t save it in the Routes folder; it won’t recognize it. Save it to the New Files folder.) When I start a Run activity, the new route is available to select. Of course, I won’t know for sure how well it works until tomorrow morning when I run the thing.

Life was easier when Garmin Connect was running. Hopefully they’ll get it back up soon.

The LifeMap and the map of your activities displayed on city pages are the same thing. Sounds like I need to regenerate your LifeMap - I just started that. There are some bugs around the advanced LifeMap

this one seems to be the “multiple activities saved at the same time or very close to each other” issue.

And now it appears. Thanks.

I’ll try not to import more than one activity in an hour in the future.

I’ll give Garmin another day or two to get things sorted, but if they don’t, I’ll be looking for ways to get my last activity off my FR235 (via the cable), and to CS for processing. It was a rather productive 9 mile day.

Have you tried out Strava’s route builder? It’s how I usually build my routes. It has the ability to export as a GPX or TCX which you would still need to upload to your watch. Just throwing out an alternative during the Garmin-geddon™ in case Map My Run doesn’t do it for you.

@Marty, no I have not tried (or even looked at) Strava’s route builder. But thanks for that tip. I’ll take a closer look.

Can I “Resume Syncing” of my Runkeeper account to get the past two days of runs? Or will this flood my CityStrides account with duplicates of the past few months runs that came through on Garmin Connect? (Garmin syncs to all of my other accounts, too.)

It looks like Strava’s route builder is only available for paid supporters. At least I couldn’t figure out how to do it with my free account.

How do your runs get to Runkeeper? If they get there via Garmin Connect, you’ll need to manually upload them to Runkeeper. Garmin is completely down, and isn’t talking to anyone.

I’m going to at least be sure the data is copied from my watch (FR235) until Garmin is back up.

Wondering if single syn a Strava activty might be a (easy) workaround, but I have Srava paused, so not sure what best option is.

@JamesChevalier, any suggestion? Thank you

It depends on whether you’re syncing one historic activity or if you’re doing this for future activities until Garmin comes back up.

Well I thought I had a problem, since Garmin never got the activity, neither did Strava…

But, I plugged the FR235 in (USB), found the FIT file. Un-paused Strava (had to log back in here), and did manual upload on Strava, pointing to that FIT file on the watch. So now the activity is on Strava, so did the single activity sync & will now re-pause Strava.

Thanks for the help @JamesChevalier!

PS. Until Garmin comes back, I’ll just hold off on the Strava un-pause. Should I also pause Garmin, until it’s back?