Discussing stats until we have a leaderboard

In about 4.5 months I’ve ascended to 6568 streets, 32nd place. There was a big gap for me getting past 37th place, from about 6000 to 6500 streets, a few weeks maybe even a month of watching my count climb and my rank stay static!

It seems Leaderboard is “working” right now, but don’t tell anyone, it’s a secret

I finally broke into the 99th percentile!

Of course, the fantastic growth of the number of Striders has helped. The 40,000 mark was just passed. Just a few months ago, I would have needed to be in the top 300, rather than the top 400, to make the 99th percentile.

I have a fix that I haven’t been able to release yet … once that’s out, it will also appear in the top left menu

@JamesChevalier : could you explain to me how i should interpret the leaderboard?
When i choose the country’Netherlands’, i get at the top a profile that has not run 1 street in that country. Strange

That is strange … It should be finding people who have completed a street in the filtered country/region/city.

I have a suspicion that there’s a bug where someone can complete a street … and then the city can be updated from OSM in a way that deletes that street … but some underlying data isn’t removed, leaving them as a bit of a “ghost” there.

It would be helpful if you could share that person’s profile link, so I have something concrete to look into.

this is what i do: 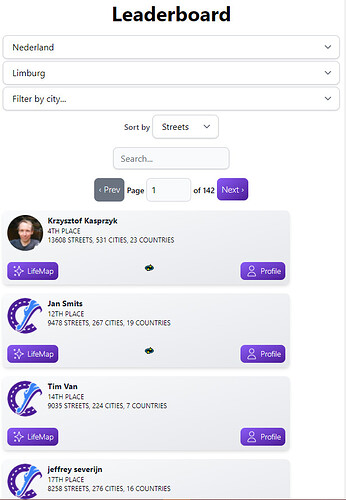 image619×893 101 KB
I want to see the board of Netherlands → Limburg.
The leaderboard is almost not changing at all compared to the board without any filter

for Netherlands as a country i had expected my place to be around top 5, but i keep having the place 20 in all filters.

Alright - the list is correct but the place values aren’t being updated, which is throwing off the sorting. I’m looking into wtf

When you filter by country/region/city, the “place” values should be updated for those locations e.g. you might be 15000th place across the globe but 1st place in your city & the leaderboard should be showing that.

so the true explanation of this is that the global place is displayed, and you’re able to filter people out by whether or not they’ve completed a street in the country/region/city & you’re able to see the global rank of each person who has run there
hrm.

Not gonna lie, was a little disappointed, when checking Denmark, and only being #20 on the list

Krzysztof Kasprzyk is also number on in Denmark, with only 22 streets run in Denmark

Not sure about this, but it seems that if I choose Sweden, I get a list of all striders that have run at least one street in Sweden, but sorted with the one first that has the most streets globally.

It would be really cool if the rankings by country were in order of streets per country! I would assume that since we have nested cities that are the sum of their neighborhoods, the calculation for countries with their cities could be done in a parallel way…?

Curious if anyone thinks “Prev” and “Next” buttons would be helpful at the bottom of the Leaderboard page?

I don’t use it that often, but sometimes when I do look, I scroll to the bottom, then want to look at Prev and/or Next.

@AndyS Do you mean a dedicated “Find Me”, so you don’t have to use search? I like that idea.

Yes Eric, it quiet often confuses me that prev and next buttons are at the top of the list. So then we have to scroll up first to go next. To me that’s not intuitive.
Not only on leaderboard, also on my profile for example when browsing incomplete cities.

@JamesChevalier
Know you probably already have looong list of CS projects, so not trying to stress you

And what’s up with all the blue/purple dots on the map.
I don’t really see the point? Have i missed something?
Seems pretty random who shows up when clicking.

Haven’t had a chance to fix this up, yet, but I do plan on it.

The dots on the map are people in CityStrides, based on their default city. It’ll cluster people if there are a lot in one area, but clicking the cluster should zoom in further until it eventually shows individual people.