As some of us stride in different cities it would be nice to have a “Completed City” list.

It would make it easier to see how your incompleted cities are doing.

I had a different take on a similar problem in this feature request. Basically allow the user to favorite cities that show up as your default view but let the user toggle to the existing view.

I brought this up in the homepage thread but it would great to be able to favorite cities so that you can toggle between the ones you are tracking and the current list that is sorted by completion. I think this would be a good default view once a user adds one or more favorite to their list (with an easy way to toggle to the current way). You could do something like add a star icon to the left of a city name to click to add/remove favorites. I suggest this because the current list sorted by …

I also stand a pretty good shot at Granbury, TX (0% of 297 streets), though I’m just getting started there. And the place I’m most likely to run, is not within city limits, so I’m not sure how that’s going to work.

I am having a similar issue. As the number of completed cities or town grows, it requires you to keep clicking “Next” multiple times to view cities or towns that are in progress. Maybe adding two tabs to the top of the screen would allow toggling between completed cities and cities in progress? I’ve added a screen shot to show an example. I used the term town, but it could read “Cities Completed” & “Cities in Progress”. 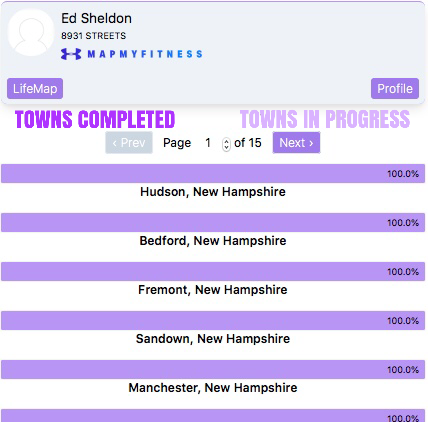 @edsheldon Wow, that’s impressive. Makes me want to see something like “100% of X streets” on those completed city lines. My 74% completion of SPB, is not as impressive as someone’s lower percentage of a town with more streets.

I guess all it takes is a look at the number of streets under your name to get the BIG picture! Nice work!

Hmm, I don’t know much about statistics, but I wonder if there is a BMI type number, that would show one’s weighted city completion score? But then again, maybe that would go against the philosophy of the site.

Keep up the good work. It will become an addiction.

It is a lot of fun discovering new places and trails that you didn’t know existed.
I’ve been at it for four years now and have 15 towns showing 100% complete and another 6 that are completed, but still need to do some cleanup with OSM and then manually completing the streets.

Living in Canada our First Nation reserves (US: Indian reservations) are legally equal to municipalities. And some of them have only 1 road in them, so it’s quick to get 100%.

However, I do like the favourite cities concept, too. This would allow the runner to focus on a current group of municipalities and see their progress in them.

James, keep up the great work and #BeActive out there!

I think having a way to pin a few cities to the top of the list as suggested by @dallas.devries is a more flexible way of fixing this issue (small cities clutter up the list even if they’re on 70% or whatever). Maybe it would be possible to leverage the existing Default City from the profile settings and pin that? Expanding it to 3 (or 5?) default cities seems like a good way to keep current projects at hand.

I like @edsheldon’s idea. Doing tabs on the profile page for “Completed” and “Progressed/Incomplete” like on a city page would allow us to easily switch back and forth between the 100% cities and the ones we still need to work on.

I would probably prefer to make the “progressed” page the default to open so I can see those that I need to work on first when I bring the profile page up. You could put city counts in the tabs like when you complete a run so it says something like “Cities Complete (7)” and “Cities Progressed (122)”

It would also work out well when a city gets updated and you loose your 100% status because of the update it would show back up in the “Progressed” tab as sort of an alert that you need to check out what has changed.

Its a fun problem to have, but I am just a handful of streets away from filling up page 1 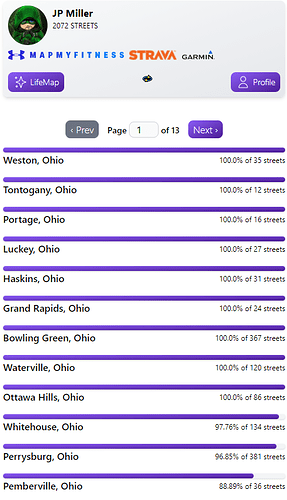 I agree with Just_one_more_street 's idea. It would be great to be able to pin a few cities on one’s profile page that they are currently working on instead of going back and forth throughout their pages of listed cities ran.

I just released this feature; some notes in Updates on March 10, 2021

Wow, that is a real neat, cool and valuable change. Thanks for that!

Awesome feature. Will really be useful. Thank you James.

James, both the tabs and the pins are awesome. Thanks.

And just to rub it in, this updated comes on the same day as one of my 100% cities got updated and I am no longer at 100%

you can never leave muahahahah

Related: I’m thinking about starting up a street-construction business

I can’t complain too much, I did the OSM updates that got imported yesterday.