I love looking at mine and other folks’ lifemaps. I think it’s even cooler than the street counts and rankings, etc. Sometimes I want to look at the big ol’ area that I’ve run and compare it to someone else’s home turf in another city, region, or country - or even in different geographical areas of my own lifemap. But I don’t know the relative sizes of cities or regions.

One bulky solution to this is to open two browser windows, zoom to the same scale, and admire…but it’s rather clunky. For example: two areas I spend a lot of time, in Lisbon and a more rural area of Portugal, at the same default scale factor - but if I want to zoom in further on one, I’ll have a difficult time matching in the other pane… 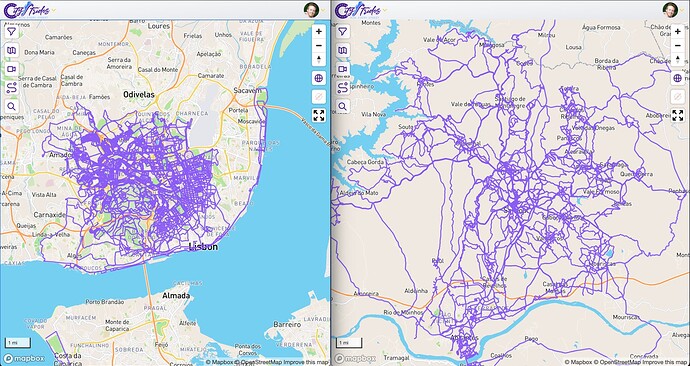 What if there was a menu option to compare lifemaps: brings you to a new CityStrides page with two embedded side-by-side windows. The first window is your lifemap, the second has a bar at the top to input another (public) user’s ID, or your own. It loads their default location, and you can pan separately in either window (and/or have a drop-down of user’s city list ranked by completion), but zooming in or out in one also zooms in the other default - ie, the scales are mirrored.

I think this would be so neat to see what lifemap coverage in rural areas with wilder purple lines looks like compared to dense gridded cities. Note that I considered Overlay two people's citystride map view and I also think that’s a great idea for comparing same-city/region lifemaps; this idea is complementary but quite different, I think you’d agree.

Love this idea.
An extra little option would be a toggle with which you can lock pan. When activated you would pan in one map and the other map would pan with it in sync.

I think the latest update has made this possible! Toggling the lifemap while viewing that of another strider superimposes the lifemaps. It would be cool if they were displayed in different colours to make it easier to differentiate between them and make the delta more visible.

Agreed that superimpose on another person’s lifemap will be WAAAAY more useful with different colors.