City map not appearing under Lifemap

Hi,
I cannot see the map of any city underlying my Lifemap. I just see the purple lines from my runs with a gray background under it. I’m using Chrome and I got this error message from the console:

“Failed to execute ‘postMessage’ on ‘DOMWindow’: The target origin provided does not match the recipient window’s origin.”

Can you share a link to the city?
I have some guesses as to what the issue could be, but I can’t know for sure without that info.

Hi, the issue affects all cities. I’m based in Chicago though, so here’s the link to my default Lifemap:

So when you visit https://citystrides.com/cities/2661 you do not see the border?

I’m trying to think of reasons for city borders not to be shown to just you (they display for me).

I see the city borders, but not any of the streets within them. I attached a picture to show what I’m seeing: 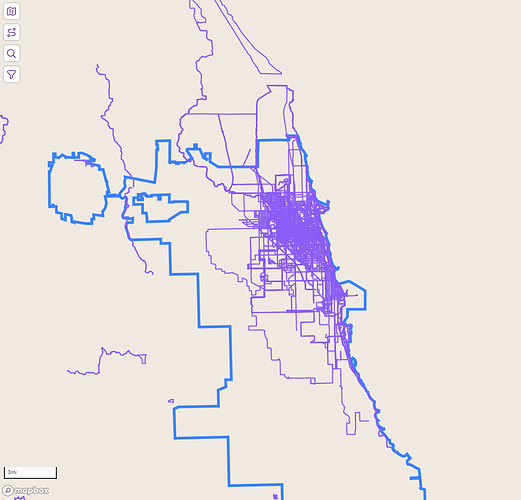 It seems like something is blocking Mapbox (the visual map provider) somewhere along the way. It’s able to show your LifeMap, and the city boundary, but it’s not able to display their mapping data.

When you’re in that state…

I think these tests should indicate whether all javascript is blocked or if it’s limited to something within Mapbox.

Do you have any ad blockers enabled? Perhaps something is blocking calls to api.mapbox.com (though I would expect this to have even more adverse affects than just blocking map display, like causing their buttons in the top right of the map etc)

I’ve had this same issue with Chrome for a long time, I ended up just using Firefox for Citystrides instead, works a treat. Not a very satisfying solution, but it works

In my case I can answer all the diagnostics questions with yes. I have adblockers running, but I have tried loading the site without, it made no difference. When I toggle between satellite and map views the background changes from black to white, but no map in either setting.

All those functions work normally. I noticed adblocker was blocking some elements so I disabled it and there was no change.

So, if Node Hunter etc is all working then this seems to be isolated to just Mapbox’s vector tile layer (the visual map display). Debugging this gets a bit detailed, but if you’re willing to give it a try:

Well I updated Chrome, and voila, the map is working again!

For future reference, before I updated Chrome I checked the network tools and there were no entries that had “vector.pbf” for mapbox. After I updated and reloaded the page, the values were back in there and the status for each were all 200. Maybe Chrome shut down certain functionality on the old version of the browser before pushing out the update?

Thanks for your help!