All nodes green but street not complete

OSM groups nodes into ways, streets can be made up of any number of ways that have the same name. Knowing whether the ways form one street or several that just happen to share the same name is not trivial. Grouping by proximity would probably work for most, but there are cities like Arlington, VA, that have streets split into disconnected chunks where this approach would create extra streets…

I’ve been having a similar issue, street is at 100% but not showing as complete. No duplicate street names in this town Stratham, NH. Chris Ager - CityStrides

Barnes Drive is an example, there have been 20-30 other streets doing the same thing over a week’s worth of runs.

When was the city last updated? There was a bug that would correct the nodes but would not update the number of nodes. This means that you could turn all the nodes green, but since there were only (for example) ten nodes but the database claims there were twenty, you couldn’t finish the street.

This bug has been addressed (I think), but if the city hasn’t been updated recently then the fix hasn’t been applied to your city.

The last OSM update was October 15, 2020. It appears that the streets weren’t edited recently, but I’ll have to double check that.

I have streets where all the nodes are green or over 90% are in cities that were updated in the past couple of days, but the street is still marked as incomplete

Apparently there’s still some tweaking that needs to be done to the update procedure. (I noticed recently that the street count is inconsistent on my city.)

I have no idea how long things take, but the problem reported by @crewchiefkc135 (Chris) on 12/20 is no longer there. All streets in Stratham show complete. And by the way Chris, you have an impressive list of 100% cities!

I’m still waiting for an update for Keller, TX (last was 2020-10-20). I don’t the know the order, but several cities near me have updated recently.

PS. Keller has 10 streets with the 0-node problem. I have run them all, so hopefully I will be 100% in Keller with the next OSM update. Oh, and sorry for dragging this off subject. I got sidetracked and started typing.

I have an example here, Småbåtsvägen in Lidingö,

It had 16 nodes, but half of it is behind a closed gate. So in december I edited OSM to indicate private. Now when Lidingö was updated in CS on Jan 28 this should have been reflected? But now I see in the map that it has seven nodes, all green for me. But it still seems to expect 16 nodes, so listed as incomplete

I have the same after a city update on several streets that were set to private. The total node count for each street seems not to be adjusted to the new runnable nodes

I have an example here, Småbåtsvägen in Lidingö

Thanks for the link - this is a perfect example of both a street with incorrect nodes count & a city with incorrect streets count … both issues will affect progress calculations.

I’ve just ran a city update to see how the updated code does… It correct both counts.

The progress calculation will take a little more time - that goes through a different, slower, queue. Let me know if you see your percentages change for better/worse today.

Looks good now! Småbåtsvägen is OK, and as I said in the other thread, Total is now only one more than sum of complete and incomplete

Ugh! I had some more post-deletion cleanup to do in my code - I’m pretty sure I just found the last couple places where I’m deleting data & not updating counts.

The woes of scaling massive amounts of work by optimizing code instead of spending more money on servers/databases.

I’m having this situation, but it’s just in plain Jane “Street” and “Place”
There is one - 36th Pl that has a segment that I edited in OSM because it is most definitely a private drive ($8M home with cameras signs that I’m not toying with).

The others though are pretty straight forward all green. I’ve gone into OSM to see if there is something that I’m missing in the tags, but they look to be straight forward highway=residential, all access.

While I’m here - when is the next update with OSM? I’m in my final three streets and have a “disused railroad” that was classified “Track” that I changed to “Rail” I’m not about to get into the mix on the Track Discussion. 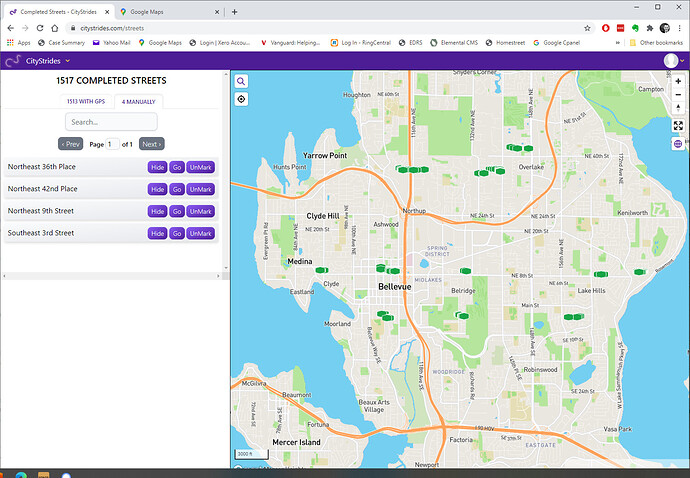 While I’m here - when is the next update with OSM?

It’s difficult to tell how long the update process will take, especially since it’s still being tweaked. My guess is two to three months after the last update.

There is one - 36th Pl that has a segment that I edited in OSM because it is most definitely a private drive ($8M home with cameras signs that I’m not toying with).

Ah! The good news is that this issue has been corrected, so the next city update will resolve the problem for you.
That street you linked to, 36th Pl, thinks it has 72 Nodes while it really only has 57. This was from a bug in earlier (prior to Jan 30?) city update code.

I want to be sure this is actually fixed, so I started an update for your city just now. I’m unsure how long this update will take to complete, so we’ll just have to

keep an eye on things.

James, I love it when you work magic like that. I promise, that’s as much dirty talk as you’ll get out of me.

Hi James, I think I completed this street yesterday, all nodes are green and the percentage is 100%, but it wasn’t marked as completed. Amsterdam was updated recently (January 29th). It does look like the number of nodes mentioned is much higher than appear on the graph, and there is a section of the road that is not accessible on foot, so that was probably removed at the last update. Is this something that should have been fixed at that time, or should I wait for the next update?

Is this something that should have been fixed at that time, or should I wait for the next update?

It’s likely something that will get fixed in the next update. I’ll manually run an update when I have free time, though, to make sure.

Confirmed! All fixed now, thanks James!