All city boundaries displayed on Lifemap

Any streets that have nodes outside the city limits required to “complete” at city are actually a mistake.

When the OSM data was brought in the query accidentally brought in all the nodes on a street if that street had nodes in a city, and was intended to only include nodes within the boundary.

Any new cities brought into CS since then are correct, and the rest of the cities will be fixed when the OSM data update procedure is developed and rolled out.

I agree your idea is off topic, but essentially what you want is a “full node-hunter” view. I think you should post this under a new topic, because it would be neat, but I see two challenges:

a) CityStrides actually might not have “streets”, it might only know about nodes. There may be no way to “draw” the road themselves (although straight line approximations would probably be fine)

b) There’s a 1000 node limit for Node Hunter. The question then is “why?” Can we just show all the nodes for a given city? Would it crash the database? If not, then you’d immediately see all the nodes outside your city range.

It would however be REALLY cool to see the “completed city view”: essentially show what we’re working towards.

This is a great idea!

Thank you @jpbari, that makes a lot of sense.

So now I’m curious, what are other Striders doing when they run across this problem (no pun intended)?

My dilemma is going to be North Tarrant Parkway to complete the city of Keller. It extends quite a bit, but not a too crazy amount (couple miles perhaps).

I guess when the time comes, as I near 100% for Keller, I’ll just have to bite the bullet and run it, and add the effort to Fort Worth.

I see a similar issue as I am completing my hometown of Montvale, NJ and there are many streets that continue to other towns (for miles and miles) so not sure how to handle that. I am 85% complete (but probably closer to 95% complete) along with other issues such as my GPS was off on a few streets and missed nodes as well as I found streets that don’t exist and cannot be run??? (I am new to this website so I will have to keep researching where to report that.) - Thanks!

How you handle this depends on what you want to do. If you have completed all the nodes with in the city limits and it is just the nodes due to the “town line bug” as I call it, some people choose to utilize the “manually complete” button. The next time OSM updates for the area your manual complete will not be needed anymore. Others are waiting and just leaving things as partially complete, knowing they will become complete when the time comes.

I personally have 5 smaller cities/towns in my area that will switch to 100% when the next update takes place.

When you find errors in the map, you can go to Openstreetmap and make the necessary changes to the map.

About the Node, Street, and City Data Wiki

Overview This Wiki is all about nodes, streets and cities What they are and where the data comes from How they are counted, and Strategies to complete the hard-to-get ones Definitions & Source of Data Note: All of this data comes from OpenStreetMap (OSM). It’s accessed via queries to a self-hosted Overpass server. Nodes: these are the “atoms” or building blocks of CityStrides. They are the individual points which make up a street. Streets: streets are essentially collections of nodes…

Anyone can make edits in OpenStreetMap (OSM), all it takes is a free account. After you create your account, there is even a tutorial (see below) that teaches the basics of OSM editing, as well as a “Beginner’s Guide” Also, at the bottom of the OSM Welcome Page is this: No Time To Edit? Add a Note! If you just want something small fixed and don’t have the time to sign up and learn how to edit, it’s easy to add a note. Just go to the map and click the note icon [Note] This will add a marker …

Personally I just finish the roads that are outside the border and then just consider that a jump start on the next town but they usually don’t go more than a few miles outside of town.

yes I am nearing 100% (98,39 % of Amsterdam) now and run the extra nodes outside the city to complete the city as full as possible. Extra fun:-) There are only 9 streets outside the limit on a total of 4711. There are more incorrect streets,some you can still run some are impossible.

Bumping the original idea in some form. I’d love to be able to zoom in on an area of my lifemap, see all the city boundaries and have them either be identifiable or better yet clickable to take me to the city page.

This would be especially helpful in identifying where all the isolated small towns and suburbs are when looking for The Next (Big?) Thing™

I’d love a way to look at an overview and see all the smaller things outlined in blue to know which one is the next closest, or see where different cities start/end to try and plot efficient runs

Bumping this up because it’s the only one I’ve found that covers the problem. I want to tell a friend about this but I can’t work out what his city is or where the boundary extends to. I’ve tried entering the names of towns in the area but that doesn’t help. A map layer with all cities on it would be so helpful.

I don’t think this quite addresses what folks are looking for but for Canberrans looking at a suburb (city) page you can then click on the ACT heading up the top left and that takes you to a page for the ACT region (like the next level up from the cities). From there I was then able to click around the surrounding cities easier to see where all the boundaries are. Depending on regions and admin levels that might be available for people in other places.

To illustrate Veronica’s example, here I took Stockholm County and clicked Show for all 24 cities 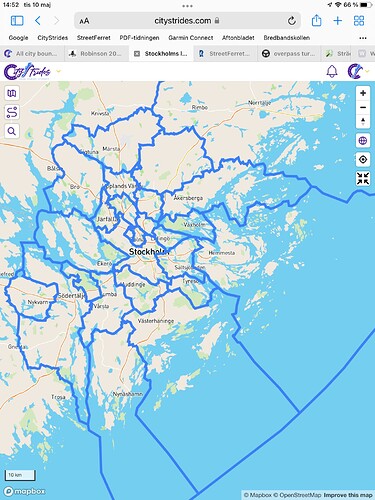 @hans1 - That is a great thing to be reminded of. I had done that once before but had forgotten about it.

One of the problems locally for me is that the next region up from my local city is the State of Ohio. The state encompasses nearly 45k square miles and currently has 952 cities in CityStrides.

There are 88 counties in Ohio, so maybe they could be added as regions somehow? I am in Lucas County, and it seems to have a border in OSM, so I wonder about the other 87

Yes, definitely sounds like a level between region (state) and city would be useful for you. Has this been considered before @JamesChevalier ?

A contrasting dilemma is that New York City has Boroughs and Community Boards in addition to county an state borders, so dense metro areas might be overwhelmed. 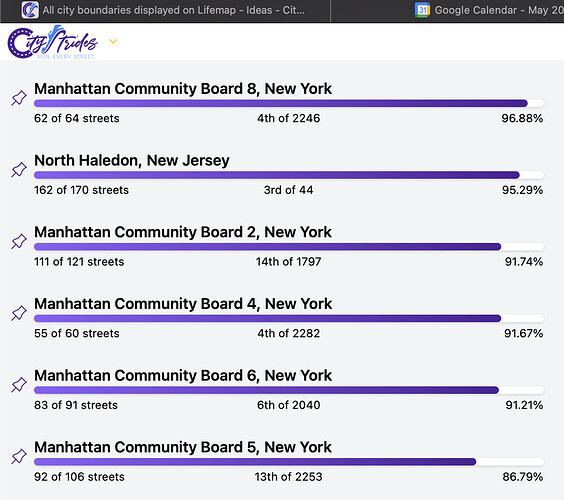 Was thinking about this today. I’m about to finish Mina de Água, Lisboa - CityStrides, which is not actually a city but a neighborhood of the City of Amadora. I would love when I’m done do display the boundaries for this one as well as the other 5 neighborhoods that compose Amadora…

With this idea I’d like to add a sub-idea: City names on CS maps are actually hyper-links to the city’s CS’s page.

One way to address the “what’s next to my city” issue is to use the node hunter: go to the place you want to identify, activate node hunter, click on the node to find out what city it’s in.

This won’t help with the visual border display, but it’s a start

I think It would be a super handy feature to have a tab in city view where one could quickly see (and navigate to) adjacent or neighboring cities. I have no idea if this information is easy to retrieve from OSM. But anyway that’s what I was thinking.

Now I often find myself going back and forth between cities via my profile page.
Sometimes, especially when I have no running history in a city and when I don’t know the exact name, it’s pretty hard to navigate to the map for neighboring cities. This adjacent city tab would solve those problems.

Similar to this idea: All city boundaries displayed on Lifemap